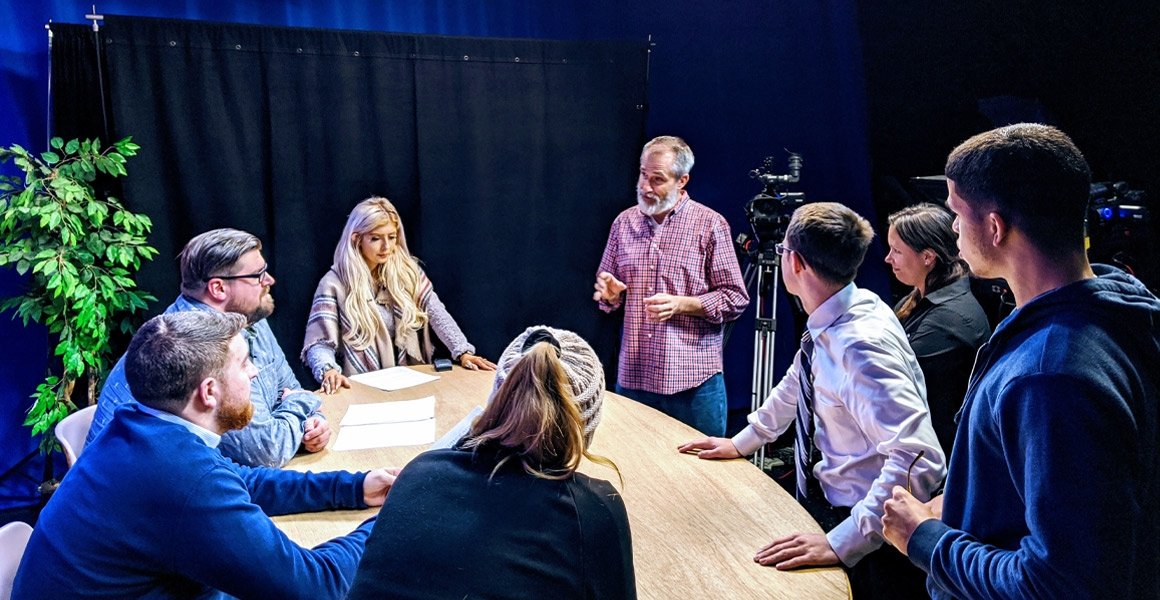 We are an on-campus, digital broadcasting classroom that provides hands-on learning for students while aiding in the visual storytelling of the impact of Rhode Island College.

Our Multimedia Production Studio operates in collaboration with the Division of College Advancement, Department of Communication, and Film Studies Program to primarily provide hands-on experience for students interested in pursuing careers in communication and film.

The studio boasts a fully functional control room, green screen and a physical set. Students can gain access to the studio by taking specific courses, or with the permission of the Communications department.

Faculty and staff are able to utilize the studio.

When not in use by our students, the studio also serves as a launchpad for the creation of video content that enables us to tell the story of the college's impact and reinforce the college's brand among our key stakeholders.

Check Out Some Of Our Latest Projects

In recognition of Mental Health Awareness Month, the multimedia production team was proud to be involved in this important initiative to promote mental health wellness.

As part of the 2021 Commencement celebration, the faculty of Rhode Island College was able to virtually salute the graduates with the help of the multimedia production team.

The multimedia production team was honored to partner with the Rhode Island College Writing Center to introduce the campus community to all the services they have to offer.

Note: The contents of this video were filmed pre-pandemic.

About the Multimedia Production Studio

The following courses may be offered, from time to time, in the studio:

This course is designed for students interested in live and studio audio production in a computer-based studio. (Cross-listed)

This course serves as a project-based extension of Digital Audio Production I, including continued exploration of sound recording and transmission, composition and arranging, editing, mixing and mastering. (Cross-listed)

Students are introduced to the concepts and techniques used during the digital media preproduction process. Students also learn how to write for a variety of digital media distribution channels.

The theoretical and practical aspects of television production, script preparation, and studio and control room operations and practice are presented. Included is a two-hour-per-week lab.

This course covers the foundations of audio production for multimedia contexts including radio/podcasting, video/cinema/film, TV, and interactive multimedia.

The preparation, writing, production, and editing of broadcast news are discussed. Emphasis is on local and special news events. An analysis of broadcast policies and principles of news management are presented.

Students advance their knowledge of digital media production, including video, digital graphics and audio, with an emphasis on nonfiction video projects. Course prepares them for their senior year capstone work.

Students will learn the skills necessary to succeed as sports reporters and will be required to read, watch and listen to sports reporting from a variety of sources.

Students explore basic film production techniques via shooting and editing exercises based upon the grammar and aesthetics of film. Production projects provide experience with a workflow approach.

Basic techniques for lighting, shooting, audio capture, and editing digital film are presented. Emphasis is on developing a working understanding of the grammar of film and digital film editing practices.

A selected area of theatre is explored in-depth.

The Multimedia Production Studio Advisory board, comprised of representatives from Advancement, faculty, IT/USS, alumni and the student body, provides advice and guidance, rooted in best-practices, for the studio’s operations.

The following personnel provide staffing for the studio:

*Funding for these positions is dependent upon the studio's annual budget allocation.

We take on a number of projects throughout the year including, but not limited to, the following: