The Green and Complete Streets ordinance, a policy initiative spearheaded by Salvatore, passed in July of this year and will greatly benefit anyone who uses Providence’s streets.

Getting around Providence easily and safely can prove a challenge for many. However, the city streets are becoming more accessible and sustainable thanks to a new policy spearheaded by RIC alum and city councilor David Salvatore '01.

Serving on the Providence City Council for over ten years, Salvatore has dedicated himself to the city and to leading on important issues like sustainability and equity.

The Green and Complete Streets ordinance, a policy initiative spearheaded by Salvatore, passed in July of this year and will greatly benefit anyone who uses Providence’s streets. It mandates that any time a road in the city undergoes redesign or repair, the changes made will be required to meet guidelines that ensure accessibility for all users of the road: pedestrians, cyclists, public transit users, wheelchair users, and motorists alike.

“The Green and Complete Streets ordinance is a policy initiative that aims to create a holistic approach to first – creating more modes of transportation for city residents – and second, keeping residents safe while moving around their city. After hearing from constituents over the last year and a half it’s clear that they want safer streets and easier streets to move around in an efficient manner that takes into consideration the environment as well,” Salvatore shares.

It’s easy to forget from the vantage point of a car, but almost everyone uses streets as pedestrians on occasion, even if only for a few moments.

“Speaking as a parent and a son of two elderly parents, these issues are eye-opening when they impact the people who are closest to us,” Salvatore explains. “As a parent who likes to walk to the local park and shop at local businesses on foot, I think taking a holistic approach to provide more modes of transportation to folks makes a lot of sense.” 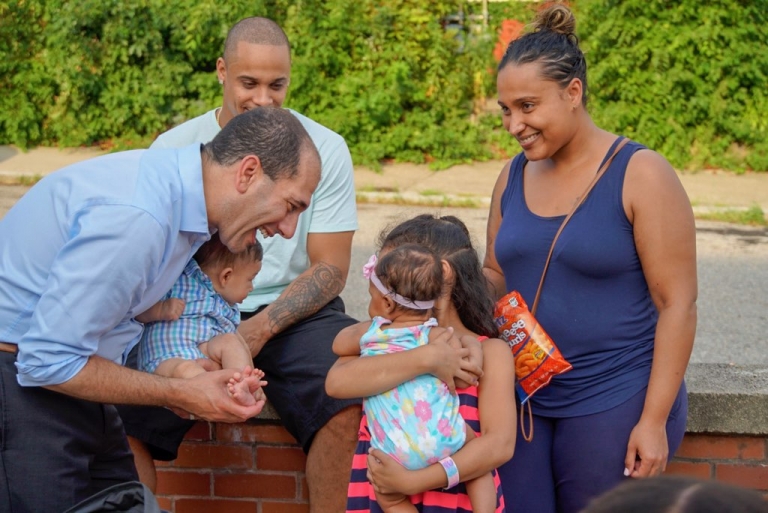 The policy was passed unanimously by Providence City Council and was co-sponsored by the entire council, a rarity. Similarly, it garnered great support from Salvatore’s constituents and other Providence residents, with no opposition.

“Both my business degree at Rhode Island College and my masters degree at Roger Williams University are always taken into consideration when I’m crafting public policy,” says Salvatore. “If there’s anything that I’ve learned from my collegiate and graduate years in school, it’s that you have to have the ability to measure what it is you’re trying to sell to your constituents. If you’re not going to measure outcomes then the policy is going to fall flat.”

The numerous health benefits, like a decrease in pollution and increased ability to use alternative modes of transportation like walking and biking, that will come from the ordinance also drew support from the AARP and Rhode Island Chapter of the American Heart Association.

Councillor Salvatore isn’t taking a break after this victory in his pursuit of ensuring a greener, safer, and more prosperous future for Providence. He already has another policy initiative in the works.

“Something that I am looking at is the creation of a position within city government that focuses on flood mitigation,” he says. “While we [the City of Providence] have taken some steps to mitigate the effects of flooding, I think this is an ongoing conversation that needs to be had so that we are proactive and we are not addressing issues after the fact, i.e. a major storm. So I think having that point person in place and laying out policies that do so is imperative at this time.”

According to Salvatore, flood mitigation is crucial not only for protecting the homes and safety of Rhode Islanders but also to see adequate property appreciation on homes.

While Salvatore has had myriad policy and reform accomplishments, his most recent one stands out. “In my ten years on the city council, this experience has been one of the highlights of my tenure,” Salvatore says. “Just hearing a lot of the public testimony given by constituents in addition to the strong support and the committee process – it was nice to hear. It’s not something that’s always the case in local government, but when nearly one hundred constituents either testify and/or provide written testimony in addition to having the full support of the city council, it’s something to be proud of.”