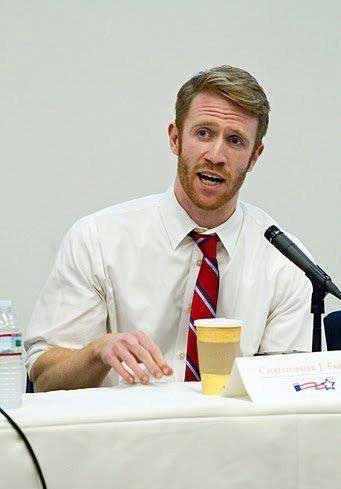 RIC alum Chris Farrell remains loyal to the mentor who embraced him and guided his path to a career in politics.

In his Cumberland hometown, Chris Farrell  ’06 concedes he was a troubled young man without purpose until then Cumberland mayor Daniel McKee recruited him to create a hangout spot for other town youth like him.

“We named it the Drop Zone because that’s where kids were getting dropped off,” Farrell recalls. “We renovated it inside and secured a grant to keep it running. We would have 100 kids coming on Friday and Saturday nights. I had messed up so much that I didn’t think I could lead anything, but creating the Drop Zone was really empowering. And it was great to know that Mayor McKee – my mentor - trusted me.”

Fast forward a couple of decades later and Farrell is a senior advisor to his mentor, who now serves as Rhode Island’s governor.

“Through the years I stayed in touch with Governor McKee because he’s a great guy who has gone from a mentor to a friend,” says Farrell, who earned his juris doctorate from Quinnipiac University School of Law in 2015. “As one of his senior advisors, I’m responsible for overseeing various departments and being a liaison to the Department of Administration, the Office of Management and Budget and Veterans Affairs. I’m in multiple meetings, engaging with a bunch of experts on several different topics to create options that build Rhode Island back better. It’s a stressful position, but a good kind of stress to work here.”

It’s also quite different from the stress of being a political operative.  In 2007 he served as a regional and state field and caucus director for the Obama for America campaign and in 2010 he was campaign manager for Peter Kilmartin’s successful run for attorney general in Rhode Island.

After helping to get Kilmartin elected, Farrell figured that experience would serve as a sufficient springboard to transition to studying law.

“I’d been doing so much fundraising and traveling around the country and wanted a more stable career,” Farrell says of his decision to take the LSAT and apply to Quinnipiac.

Farrell reached out to Rhode Island College Professor Emeritus Kay Israel, an advisor of his during his time at RIC to write his recommendation for law school. Farrell says Israel’s glowing letter definitely sealed the deal for his entry.

During his time at RIC, Israel says Farrell was the type of student who would absorb everything possible about a subject.

“Over time it was apparent that if you gave Chris something he cared about he would commit totally,” Israel says. “That trait was evident at RIC and has been ever since. Chris has been committed to working in the public interest throughout his career.”

Of all the endeavors he has pursued, Farrell says law school may rank as the most intense.

“In law school there were so many smart people who were wicked good as undergrads,” Farrell recalls. “And most of the law students were four years younger than I was, had gone to private and boarding schools, could read faster and take notes better than I could. I had to work twice as hard because I knew I wanted to graduate with at least honors. And I’m proud that I did so.”

But it is at RIC where Farrell says he built a foundation for success.

“I was an active student who learned how to be productive and engage in volunteer activities,” he recalls. “I was a commuter student, which was a good thing because I probably couldn’t have  lived  on campus with distractions. And I probably wouldn’t have worked on my first campaign if Kay Israel hadn’t advised me to do it.”

Israel says he’s proud to see the notable accomplishments being racked up by Farrell, who was among the first set of students to participate in RIC’s American Democracy Project, which Israel co-founded with Professor of Communication Valerie Endress.

“Chris’ ascension to Governor McKee’s inner circle seems to be a normal step upward as he demonstrates what, with a sense of determination, a committed and engaged individual can accomplish,” Israel says. “It has been a pleasure to have had Chris as a student, alumnus and, I hope, a friend.”