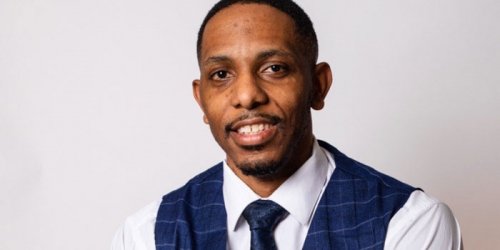 Bailey has taken on a position in his hometown to help minority constituents receive the assistance they need.

Former Rhode Island College Basketball Coach Bob Walsh recalls how Bobby Bailey '10, whom Walsh considers one of the best players he's ever coached, used to hold back on scoring points to ensure that his teammates could rack up points, too.

"We would joke with him and say, 'It's OK Bobby, you can go ahead and score 20 points, but he always worried about those around him,''' Walsh says. "He's extremely selfless, and one of the most intelligent and measured individuals I've ever been around."

Bailey's selflessness is on full display these days. After a stint on the West Coast working in the Los Angeles Rams' public relations office, Bailey has returned to his hometown to fill a newly created position as minority outreach coordinator in Fall River, the 10th largest city in Massachusetts.

"I'm walking by faith because there's no precedent and no systems in place for this position," Bailey says. "But this is an opportunity to bring diverse voices from the community to the table and identify city services they need. This brings out the humanitarian side in me."

Walsh says it's a perfect fit.

"When I recruited Bobby to come to RIC, he had an uncommon awareness of the impact that education could have on his life academically and athletically," Walsh says. "I think he sees the impact that opportunity and education can have for those kids who are growing up now in his hometown."

While Bailey recalls that Walsh taught him many lessons about basketball, he nurtured Bailey's development off the court, too.

"Walsh had a system in place to not only be successful in basketball, but in every phase of his players' lives," Bailey says. "He wasn't scared to challenge us. At RIC, sports became synonymous to real life and helped me build real relationships."

Such strategic thinking guided Bailey as he sought a public relations position with the Rams.

"I met the Rams' public relations director, and he gave me his card," Bailey says. "For months, I reached out to him via email and calls. I was persistent, consistent and did my research on the team. In 2018, the director called me in to work on game days as a public relations assistant."

The work in the Rams office was strenuous with Bailey toiling about 65 hours per week.

"People would say to me, 'that's my dream job' but everyone wants to work in sports until they actually 'work' in sports,'' Bailey says. "You're proofing media guides, prepping players and coaches for interviews and compiling pre- and post-game statistics. People don't realize the long nights this work requires."

However, Bailey says he wouldn't trade the two years he spent with the Rams for anything.

"It was an amazing experience because from Day One, my boss threw me in the fire to learn," he says. "As employees we were encouraged to engage in open dialogue. Nothing was off-limits, as long as we respected the values of the organization and the way things operated. If I saw something that could be improved, I could state it. I felt like a part of the locker room."

In March, Bailey left the Rams to pursue a position as a post-production crew member for pop singer Justin Bieber's tour. He landed the lucrative gig with assistance from a friend who does design and staging work for Bieber. However, thanks to COVID-19, Bailey never got the chance to start the job because the tour was temporarily postponed.

Bailey's friend reached out recently to inform him that the tour is back on, but Bailey says he's sold on his new Fall River mission for now. Besides, Bailey, 35, is contemplating settling in with his girlfriend to start a family.

"While living in L.A., I saw so many people who had money, but I started to realize even with all that money, these people had no purpose," he says. "I'm confident that I can build for myself, but what about all the people out there who need my help? It's important for me to help people rather than sit on an island somewhere helping myself."

In Walsh's opinion, that view is quintessential Bobby Bailey.

"Bobby is going to be successful no matter what he does," Walsh says.