Silas Murray ’15, a 2014 NCAA Division III All American wrestler, is program director and head coach for the Providence Chapter of Beat the Streets New England – an after school wrestling program that is putting kids on a path to success, or, as Murray puts it, “keeping kids busy so trouble can’t find them.”

“Basically, we want to deter kids from negative life choices. We tell them, ‘If you’re looking for a group of friends, join the wrestling team.’” And that goes for girls as well as boys.

Beat the Streets is coeducational. “Girls are very much equal to boys, when it comes to wrestling,” Silas says, “because girls physically mature faster than boys, they are mentally tougher and, in some cases, stronger than boys. Girls wrestling is also the fastest growing sport in the county.”

Silas’ passion for wrestling began when he was a youth. At RIC, he joined the wrestling team and hit the mat alongside his brother, Jonathan Murray ’16, who was also on the team and is now RIC’s assistant wrestling coach.

And Silas has never left. He continued to coach part-time for Beat the Streets Providence before taking on leadership positions within the organization – first as program coordinator and now as program director.

Since its founding, Beat the Streets Providence has brought co-educational wrestling to 17 locations and to over 1,500 students in the Greater Providence area. According to Silas, the program has also “measurably improved student attendance, student overall health and self-confidence.” 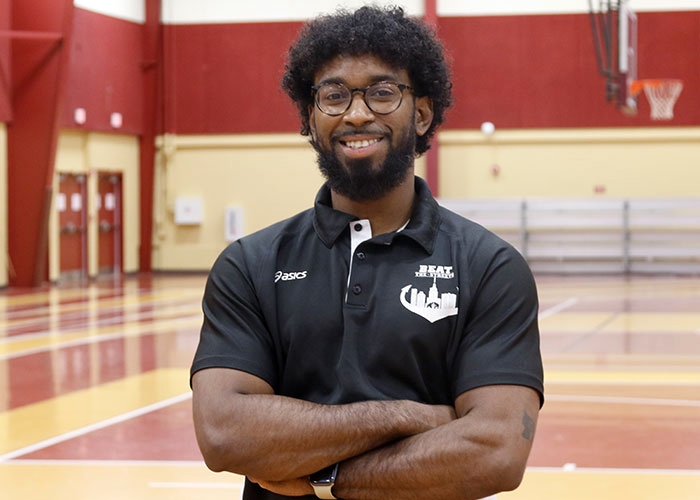 The driving force behind this 32-year-old leader is the desire to guide and support youth.

“I know how important wrestling was for me coming up,” he says. “I had great teammates and mentors in my life who directed and supported me. And that’s what I want to do for youth.”

As program director, Silas isn’t hitting the mat much anymore because he’s too busy working with his organization’s partners such as the Providence Public School Department, the Providence After School Alliance, local colleges, other after school programs and Providence parks and recreation.

He’s also growing in his leadership role. Recently he enrolled in the Institute for Nonprofit Practice’s Core Certificate Program, where he connects with leaders and up-and-coming leaders at other nonprofit organizations, while taking classes that equip him with the skills and knowledge he needs to lead.

Ultimately, he considers the Beat the Streets wrestling community a family.

“We call ourselves family for a reason,” he says. “I tell the kids that being a family doesn’t stop at wrestling practice. You look out for family. If you see a family member struggling, you pick them up. You always have their back, be it in class, in the hallway or in the community. My goal for Beat the Streets is to have a home base, where programming happens in-house. By having a home base, our students will know that they always have a home to come back to if they want to train or get additional support.”

Take a look at the family in action: