The Birth of a Gamer 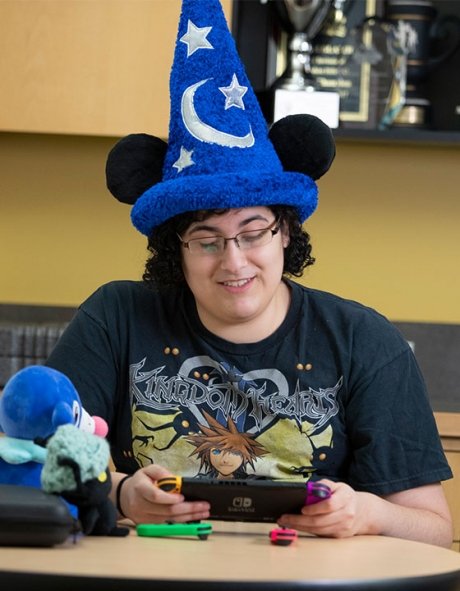 "When I transferred to RIC...I was really struggling emotionally and academically from transferring schools. Joining the G.A.M.E.R. club helped me connect with people."

02/07/2020
By Gita Brown, written as a first-person narrative by Thalia Guardarrama

I started gaming before I learned to read and write. My dad was a huge gamer. When I’d go visit him as a kid, I’d lay in his lap just watching him play. That was before the most important event in my life happened – not just in my gaming life but in my life in general.

I walked in on my 12-year-old step-uncle playing this game called Kingdom Hearts. It combines Disney characters with Final Fantasy characters. For me, it was the coolest thing in the world.

It’s a classic hero’s journey. It’s about a boy named Sora who goes on this adventure to find his two friends after they were separated when their island is attacked by a dark force called the Heartless. Heartless are monsters that go around consuming worlds. Sora is blown away and ends up in another world, where he meets Donald and Goofy who are looking for King Mickey. The entire game is about the three of them searching for their friends.

They travel to these different worlds that are set in some of your favorite Disney movies like “Alice in Wonderland,” “Tarzan,” “Peter Pan,” “Winnie the Poo.” These worlds are also inhabited by Disney characters and Disney villains who the player has to defeat.

After watching my step-uncle play, I kept talking about it nonstop to my grandparents. They raised me my entire life. I called them mom and dad. Being their only child, I also got a lot of attention. On my birthday, they bought me a PlayStation 2 and Kingdom Hearts. The rest, as they say, is history.

For me, Kingdom Hearts was a gateway. It’s hard for me to make friends and connect emotionally to other people. In Kingdom Hearts you get to interact with all these characters from all these Disney movies, and it’s super emotional.

I’ve now beaten every single game in the Kingdom Hearts series. It was super emotional for me because Kingdom Hearts is all about growing up. Sora is just this lost kid who doesn’t really know what he’s doing. He’s in a place where everyone who loses their world ends up. He’s trying to understand how his life is changing, how his relationship with his friends is changing. I’ve grown up, too. Finishing all the games in the series was like acknowledging the end of an era in my life. I cried as the credits rolled.

Honestly, it’s terrifying for me to think about what my life would be like if I hadn’t gotten into Kingdom Hearts. Literally 98 percent of my life can be traced back to that one day that I decided to go watch my step-uncle play a video game.

Then there’s the Rhode Island Comic Con and Anime Boston conventions. It’s super fun because you’re in a place where everyone likes the same things and where people dress up like the characters you love. Last year at Comic Con I went dressed as Sora. Even though it’s a comic book convention and Sora is a video game character, no one minds, everyone is so welcoming.

When I transferred to RIC, I became secretary of an anime club called Otaku and I joined the G.A.M.E.R. club, which has a lot of Kingdom Hearts fans. That was really cool for me because I was really struggling emotionally and academically from transferring schools. It helped me connect with people. The entire story of Kingdom Hearts is all about connection. They call it the power of the heart. You connect your heart to the hearts of other people, and the strength of your heart is your power.

Kingdom Hearts is also about the power of friendship and overcoming obstacles. It teaches you that it’s okay not to do everything yourself. Friends can help you and they’ll give you the strength to continue. The most famous quote in the game is when Sora says, “My friends are my power.” That’s the quote I used in my high school yearbook.

I love video games because it’s not always about becoming another character, it’s also about being okay with who you are. You go to another world and you can be someone who’s appreciated. You have a part to play on the team and you’re valuable to others. There’s another game I play where the characters talk to you directly and tell you, “Thank you so much for helping us,” or a character will say, “I’ll wait for you so we can head out together,” and they’ll say how grateful they are to have you. It’s great.

This article is based on an interview with Thalia Guardarrama. Born in the Bronx, Guardarrama majored in art at the Massachusetts College of Art and Design before transferring to Rhode Island College in 2019, where she is majoring in English/fiction writing.