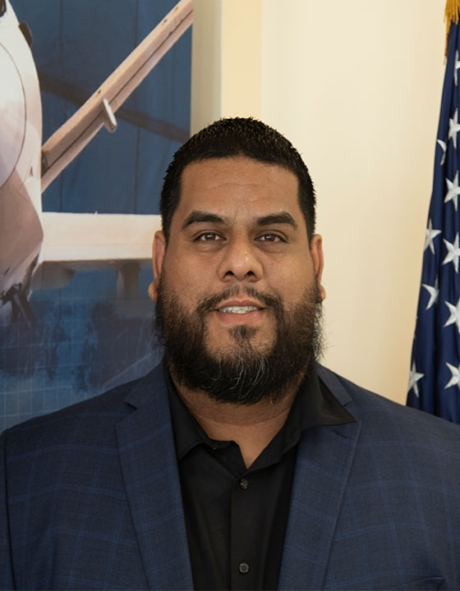 “Most of our population walk around very much unaware of what veterans have experienced and what it means to transition back from deployment. It’s important to inform and educate the general public.” — Micaela Black, VetSuccess on Campus

Alex Ortiz, age 36, is an Army veteran who was stationed in both Iraq and Afghanistan. He served for seven years (2006-2013) as a wheel vehicle mechanic, which included combat-related missions. He retired with multiple spinal cord injuries and two traumatic brain injuries.

A husband and father, Ortiz lives in constant pain. He has turned down surgery for a spinal fusion because it would mean losing 70 percent of the mobility in his spine.

This fall he began completion of his Bachelor of Science degree in accounting at Rhode Island College. He is taking six courses and intends to go on to law school to pursue a Juris Doctor degree and a Master of Law degree in taxation.

Oritz, like many veterans, lives in a kind of parallel reality with civilians. After facing the terror and violence of war, veterans struggle to transition back to civilian life. “The transition, in fact, is brutal,” Ortiz says.

Along with the physical wounds of combat, there are the emotional wounds – the infamous PTSD.

“For years you’re accustomed to doing what you were told to do, when you were told to do it, because every action you took could cost you or someone else their life. You got a steady paycheck, food and housing. You didn’t have to wake up every morning and worry about what to wear because everyday you’re in uniform. Then you leave the military and all that structure is gone,” he says.

“I would return to the Army in a heartbeat if it were possible,” he says. “What I miss most is the brotherhood.”

In a TED Talk titled “Why Veterans Miss War,” former combat reporter Sebastian Junger, who spent a year with a platoon in Afghanistan, explains that “brotherhood is different from friendship. Brotherhood has nothing to do with how you feel about the other person. Brotherhood is a mutual agreement within the group that you will put the welfare of the group, the safety of everyone in the group, above your own.”

“No matter what race or ethnicity you were,” Ortiz says, “I knew that when things got ugly you were going to have my back and I was going to have yours. If we did that, we’d probably make it out alive. That kind of brotherhood doesn’t exist in civilian life.”

In civilian life, many veterans have feelings of alienation, says Junger. “Twenty-two Veterans commit suicide every day,” he says. “Most are Vietnam vets. Maybe the cause of PTSD isn’t what happened in the war, but the society you come back to. Perhaps instead of naming it PTSD, we name it post-deployment alienation disorder.”

“The Department of Defense also does a poor job of preparing veterans to transition out of the military,” Ortiz says. As he prepared to retire in 2013, he was one of only three soldiers enrolled in the Army Transition Assistance Program (TAP), a one-week program of seminars and workshops that explain the benefits soldiers are entitled to after they leave active duty.

“When I came to class, they asked me how I found out about the program,” he says. “I told them I stumbled upon it on Google. Many soldiers leave not knowing about the benefits they’re entitled to. Plus, a one-week program isn’t enough time to grasp all the information. It’s overwhelming.”

Using his Vocational Rehabilitation and Employment benefit, which provides services to eligible service members and veterans with service-connected disabilities, Ortiz enrolled at Rhode Island College. He intends to graduate in spring 2022.

Ortiz is also president of the Student Veterans Organization (SVO) and sits on the finance and electorate commissions of Student Community Government, Inc.

The purpose of the SVO is to provide a network of support for military veterans, their families and civilian supporters at Rhode Island College. SVO also educates the college community about the experiences of veterans and works with the college administration to meet the needs of prospective and enrolled veterans.

“Most of our population, especially on college campuses, walk around very much unaware of what Vets have experienced and what it means to transition back from deployment,” says Micaela Black, VA coordinator of Vetsuccess on Campus. “I’d like to see more of the RIC community attend SVO events and panel discussions.”

“Faculty could offer their students incentives like extra credit for attending these events,” she says. “It really doesn’t matter how they get there, I just want them there. I believe if RIC students came, they would leave thinking differently about student veterans.”

“Other colleges are implementing Green Zone Training across the country,” she says. “It’s another way of helping campus communities understand military culture, student veterans and their experiences. We will be holding a training at RIC in spring 2022.”

Click here to learn more about the common difficulties veterans face in transitioning from civilian to military life.