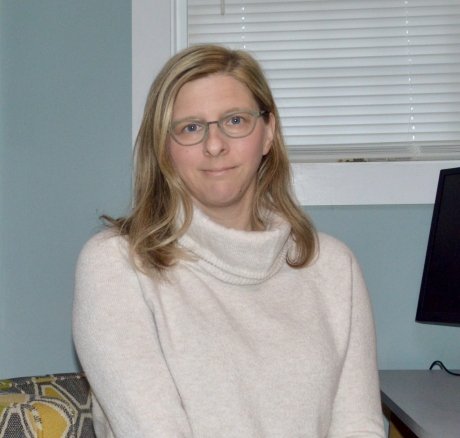 Kiser introduces her students to women in history who possessed agency and power despite existing under limited circumstances.

“I was in my first semester at the University of Buffalo, which was trying at the time to recruit more female students to its graduate programs in history,” Kiser recalls. “One thing that the graduate school paid attention to was helping female students learn how to present themselves and to be more assertive. That was pretty helpful for me because I was an introverted person.”

Through the lens of women and gender, Kiser teaches environmental history, history of science and medicine and early modern European history and globalization at RIC, introducing her students to women they never knew existed.

“The students are surprised and appreciative to learn about the contributions of women who found agency and power to shape their lives when they didn’t have the freedom to do so and lived under limited circumstances,” Kiser says. “Gender history has shown that women, even if they were silenced, have made it through. Political power is important, but you can’t underestimate the stories of women who did not have the opportunity to get involved in politics but still had a lot of cultural influence.”

Former First Lady Hillary Clinton, a woman who does possess political power, will forever be remembered in history for a phrase she coined during a speech before the United Nations Conference on Women more than 25 years ago.

“Women’s rights are human rights!,” Clinton declared in her address.

Kiser says it’s complicated to determine if that statement has been fully realized yet.

“Politically speaking in this country and other countries, that is a hard question,” she says. “There’s been a lot of pushback in the culture wars and gender has been at the heart of that. Feminism is considered to be radical. I think we’re in a place where growth is clear, but there’s conflict when it comes to the expansion of women’s rights.”

According to a 2020 Pew Center research study, 77 percent of people polled said a chief impediment to achieving gender equity is sexual harassment. Kiser says that poll result is not surprising.

“We’re at the early stages of identifying sexual harassment openly,” she says. “And that will have a huge impact on gender equity. The #Me Too Movement has definitely come when the United States is in a complicated place. The movement has played an important role, but there’s still so much work to be done. I’d like to think the movement has opened the eyes of men who were not aware.”

From an historical perspective, Kiser says she believes awareness of observances such as Women’s History Month in March and National Girls and Women in Sports Day (held annually the first week in February) should remain essential. A former tennis player, Kiser says her college’s observance of National Girls and Women in Sports Day afforded her an opportunity to learn about the past accomplishments of female athletes and take note of their struggle for equality.

“As a 19, 20-year-old, I didn’t think about how female athletes of the past were treated and what that meant for opportunity and resources,” she says. “I started to think a lot more about the lack of equity and resources and how that might translate into potential issues down the road. Female athletes are starting to see better opportunities, but it remains an interesting issue.”

Kiser says she stresses to her students the importance of women’s empowerment.

“It’s good to see in the New England area that there are women who are involved and constantly advocating,” she says. “We must find ways to keep speaking up and making our voices heard. Women have been fearless for a long time, but I think the energy is spreading to even more women.”

Kiser is a history professor at RIC, who teaches through the lens of women and gender.