I think one of the biggest challenges of living, working and being part of an urban community is that it’s so easy to fail and then stop," says Alex Lucini ’09.

As a teen, Alex Lucini played bass in a punk rock band. He would sport an orange mohawk and all the other punk paraphernalia like anti-establishment T-shirts, leather jackets and spiked bracelets and chokers. During shows he enjoyed hurling himself off the stage into screaming crowds because harder-louder-faster was the punk rock style.

Today he’s still “a little extra,” according to students at West Broadway Middle School in Providence where he teaches music. Only now he wears a suit and tie and is simply known as a passionate educator.

Each day he passes on to his students what he calls the key to the future – persevere despite failure.

“I think one of the biggest challenges of living, working and being part of an urban community is that it’s so easy to fail and then stop,” Alex said. “But the great thing music education affords you is knowing that the first time you pick up an instrument, the first time you play an instrument, you’re going to fail. You’re going to fail over and over again. But the perseverance and resiliency that comes from learning to master an instrument stays with you for the rest of your life.”

In his rise from musician to music teacher, Alex had to face his own learning curve. He was a first-semester freshman at the University of Connecticut when he decided to enroll in RIC’s music education program; however, in order to be admitted, he had to pass an audition.

Alex decided to abandon  his electric bass, with its hard-edged sound, and audition on a tuba, only he wasn't any good at the tuba.

“I knew how to hold a tuba,” he explained, “but my playing was not even close to college level. I didn’t even know my scales.”

​Alex called the chair of RIC’s music education program, Professor Rob Franzblau, and explained​ his predicament. Franzblau set him up with a RIC tuba instructor, which Alex paid for out of pocket.

“I would commute back and forth, taking private lessons at RIC while studying at UConn,” Alex said. “I practiced extremely hard. My goal was to pass the audition in the spring and transfer to RIC in the fall.”

On the day of his audition, Alex walked into the room wearing a purple suit – the only suit he owned. When he sat down , his tuba fell apart. After quickly putting the pieces together, he pursed his lips around the mouth piece and won over the judges with his sonorous tones.

He’d go on to spend the next three-and-a-half years performing with the RIC Wind Ensemble and Symphony Orchestra, giving free private music lessons at Hope High School and resurrecting the RIC chapter of the Music Education Association of which he was named president. Though Alex lacked the classical training of many of his peers, he worked hard. He attended classes and rehearsals throughout the day and sold pizzas at night.

“I never worked harder in my life than the three-and-a-half years I was at Rhode Island College,” he said. In 2009 Alex became a first-generation college graduate ​and went on to marry another RIC grad, Danielle Lucini (Class of 2012), an honors student who double-majored in music education and musical theatre. Today,​ Danielle is a music teacher at Mt. Pleasant High School in Providence.

Danielle embodies a youthful, kinetic energy that melds well with her young charges, and like Alex, Danielle believes that true failure means simply ​never trying. She imprints​ this belief in her students and lives by it herself.

“When I was hired to teach at Mt. Pleasant High School in 2014, I was told, ‘Here is a box of secondhand instruments, turn this into a band,” Danielle said. “‘And by the way, we don’t have any​ music program, any structure or any student interest.’” In other words, the odds were overwhelmingly against her that her program would​ succeed.

Undeterred, Danielle started out with six students and​​ turned that into 26 by the end of the year. Within five years she had 50 students. Today, her students perform in parades, at the State House, in nursing homes and in competitions, returning home with ribbons.

“It’s easy to look at the physical structure of our buildings, our school budgets, our demographics of special education and English language learners and lower your expectations,” Alex said. “But Danielle does a great job of creating an environment where expectations are kept high.”

“I tell my students, ‘So you’re an 18-year-old holding an instrument for the first time versus a kid in an affluent community whose had private lessons since fourth grade,’” she said. “‘Just play the instrument to the best of your ability.’” 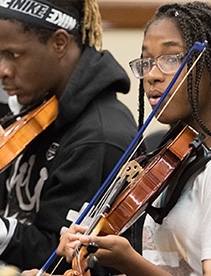 “What our schools get wrong about music education,” Alex added, “is focusing on how fast, how high, how loud students play and the degree of difficulty of the music. That’s not what music is for. What we focus on with our students is actually making music. If they’re jamming out to ‘Mary Had a Little Lamb’ and they’re putting some soul into it, then they’re doing what music was meant to do.”

And just as failure is not fatal, success is never final. “I tell my students that you can play ‘Mary Had a Little Lamb’ a billion times, but the next time you play it, play it a little bit better than you did before. In other words, when you reach a certain level of success, strive to get even better.”

Danielle also encourages her students to continue to reach musically. Multiple times a year she takes her students to Rhode Island College (only a 10-minute walk from the high school). There, they participate in open workshops led by Franzblau, attend student recitals and engage in campus tours. One of her former students is now a RIC music education major, another is an opera performance major, while three others are minoring in music. “Struggles do come with the job,” Danielle said, “but they are also what make it worthwhile.”