Forget the stereotype of a gamer as some dorky, shy kid, who holes away in a dark room by himself lit only by the glow of a console. Far from isolating people into lonely basement kids, video games are bringing RIC students together.

Every Thursday night, from 7-10:30 p.m. in Gaige Hall 200, RIC gamers take part in one of the largest student-run clubs on campus. G.A.M.E.R. boasts 30 to 40 participants on game nights and more than 100 at its annual charity event.

They come in all majors, all ages and ethnicities, and there are as many female players as male. Even former G.A.M.E.R.s who have graduated from RIC return to take part. Everyone plants themselves in front of TV monitors, Nintendo Switches or game boards to immerse themselves in the bliss of gamedom.

“If you’re interested in video games, board games, card games or just want to watch people play, you should stop by,” said Casey Williams, president of the club. No experience or special skills are required. 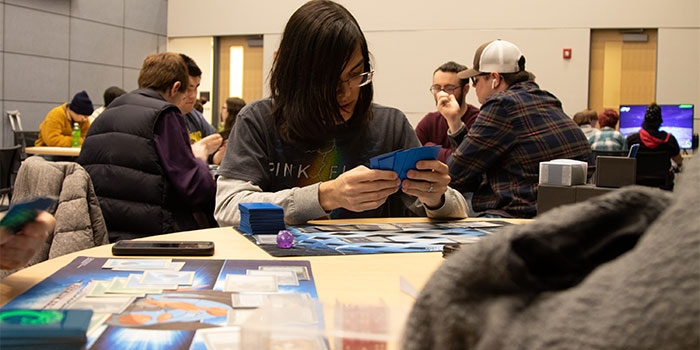 And clearly, no member of this club is cut from the same cloth, yet everyone is totally welcoming in a nonchalant, be-whatever-you-want-to-be sort of way. Most members play their favorite game all night while others move freely from table to table, playing a variety of games.

It used to be that game culture was stereotyped as nerd culture, Williams said, but in the last 10 years, the demographic has become much broader as has their tastes in games. Today, there are as many types of games as there are gamers.

Williams, for example, is a hardcore Kingdom Hearts fan, a Japanese role-playing game. Just the mention of this game speeds up his speech and lights up his eyes.

“I haven’t slept in 24 hours,” he said. “The DLC [downloadable content] for Kingdom Hearts was released yesterday, and I stayed up all night to play it.” Downloadable content is content created by the developer that didn’t make it into the original game. With the help of a gallon of caffeine, Williams beat the game in the early hours of the morning.

When asked why players become so obsessed with a game, he explained that it’s the difference between watching a film and participating in it. Video games invite the player to participate in the action, which is an immersive power far more potent than the voyeurism of watching a film.

Moreover, while films usually have a two-hour time limit, video games don’t end with one game, he said. Kingdom Hearts is a series of games that follow the main character over many years. You watch the character grow from a 14-year-old boy to a young man. Williams began the game at age seven and is now 21, still playing the game as new games are released.

“It’s a fantastic way to tell a story,” Williams said.

He believes stories now rival major Hollywood films in technology, scale and depth of storyline. They can also have the emotional gravitas of films, only the experience is more personal because you control the actions of the protagonist. 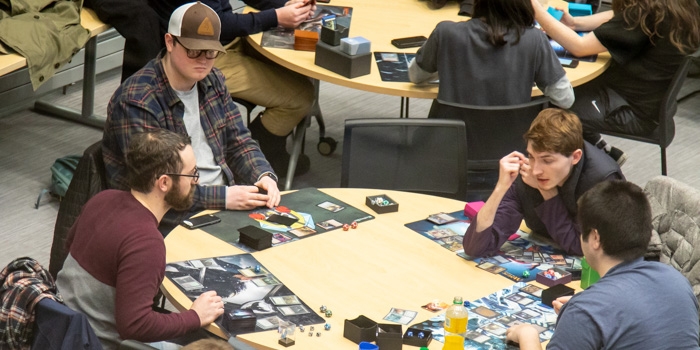 Because gaming is so popular now, a gamer can become part of an abundance of online and in-person communities. RIC’s G.A.M.E.R. community holds a tournament throughout the year, where club members compete against each other. They are also offered an evening at Dave & Buster’s arcade – free for the first 30 RIC students – and a night of Lazer Gate Lockin – also free to the first 30 RIC students. On April 23 the club will hold its annual charity event, filled with tournaments, raffles and prizes. All proceeds benefit the AbleGamers Foundation to improve accessibility and enable more people with disabilities to be able to play video games.

Williams encourages all RIC students to partake in G.A.M.E.R. “If you’re a fan of gaming of any kind and just want more interaction or even if you’re having a rough day and just want to come and talk to people, you’ll find someone at the G.A.M.E.R. office with the same interests.”