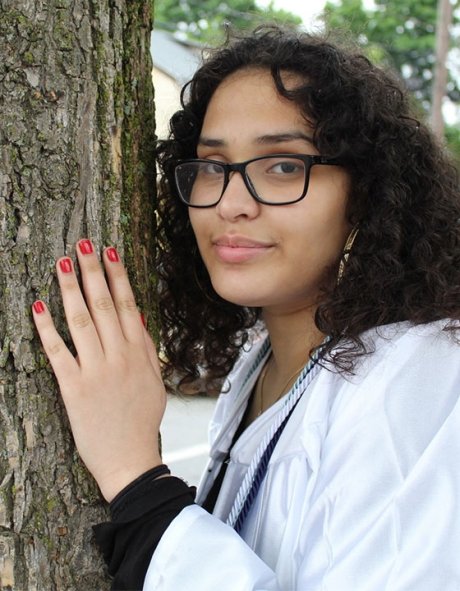 Nieves intends to spend the next four years studying sociology, with particular interest in prison reform.

"I wanted to get away from the 'small' that I knew," says Providence native Kimberly Nieves on choosing a college.

"I live in a small state and I went to small schools. There were 60 students in my graduating class at Paul Cuffee High School. Then I started pricing colleges out of state. Soon the fear of being in debt surpassed the need to go to school out of state."

Though her world remains somewhat small, it comes with a lot of support.

Along with receiving a generous financial aid package, Nieves will be a member of Rhode Island College's Preparatory Enrollment Program (PEP). Invested in student success, PEP supports the academic and personal development of first-generation college students and offers a summer transition program, academic coaching, personalized advising and the support of fellow PEP peers throughout their years at Rhode Island College.

Nieves is 99 percent sure that she wants to spend the next four years studying sociology, with particular interest in prison reform.

"I took an AP Government and Politics course and a U.S. History II course at my high school that blew my mind," she says. "I saw how connected everything is at such deep levels. I saw how history repeats itself and that some of the same problems we have today are fundamentally the same problems we had in the past just packed a little differently. The more I learned, the more I wanted to learn."

In high school, Nieves was a member of Youth in Action, an afterschool program that instills leadership and activism. Although she has participated in marches, Nieves would not describe herself as an activist or even a community organizer.

"I'm more reflective by nature," she says. "I want to be a lifelong researcher. I look forward to being on the RIC campus. I like the idea of walking to classes and finding outdoor spaces where I can sit and study. The campus is really calm and beautiful. I'm also excited about meeting new people and learning about their interests and backgrounds."

Yet being on campus may not be an option in the fall due to the ongoing global pandemic.

"Yes, I know," Nieve says. "It's disappointing, but whenever I start thinking about what I don't have, I rebut it with all the blessings I do have. I got accepted to Rhode Island College; that's already a blessing. I'm in good health; that's a blessing. And though I may have to attend school online, it won't be for four years. Eventually I will be able to take classes on campus."

She adds that although some students have decided to take a year off from college until campuses reopen, that was never an option for her.

"I want to keep my momentum going because I plan to pursue a master's degree or Ph.D. in sociology," she says, "and I don't want to prolong my education unnecessarily. Three months of distance learning at my high school gave me a sense of my strengths and weaknesses when it comes to online learning, and I plan to use what I learned to help me in September."