LeBlanc on Track to Rise in Politics 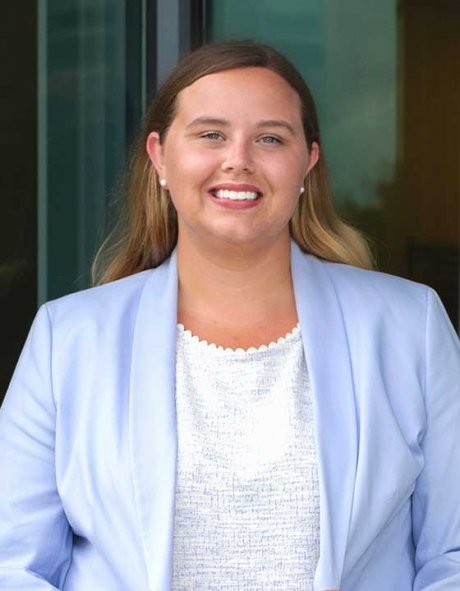 LeBlanc's affinity for politics grew at RIC by participating in internships and the college's branch of the American Democracy Project.

When Danielle Stefanski ‘19 is asked to predict the political future of her best friend, Madeleine LeBlanc ‘20, she pulls no punches.

“I often joke with Maddie that she’s going to be an American president one day,” Stefanski says. “I can definitely see her in the Senate from either Rhode Island or Massachusetts. She’s one of the hardest-working people I’ve ever met, a go-getter who has what it takes to go far.”

After changing her major from nursing to political science and public administration in her sophomore year, LeBlanc says she discovered her niche, which led to the prominent post she holds today as campaign finance coordinator for Rhode Island Secretary of State Nellie Gorbea’s campaign for governor.

LeBlanc, 23, a native of Plymouth, Mass., credits her time participating in RIC’s American Democracy Project (ADP) program and a few internships with bolstering her passion for politics. Through ADP, founded in 1992, students are encouraged to conceive, develop and promote lively political debates and forums.

In fact, it was a recommendation from RIC Professor of Communication and ADP Director Valerie Endress that linked LeBlanc to Gorbea’s campaign.

“Professor Endress had learned about a finance assistant position in Nellie’s campaign and was wracking her brain about who could be a good fit,” LeBlanc recalls. “She asked me if I would consider interviewing for it. I went through the interview process a week before my 21st birthday and learned that I got the job a day after my birthday. I think that if I hadn’t displayed hard work in my classes and extra-curricular activities, Professor Endress wouldn’t have sought me out for that connection.”

Before her stint with Gorbea, LeBlanc had completed an internship with another titan in Rhode Island politics: Congressman James Langevin ’90.

“My internship with Langevin cemented the idea that I was in the right place and sparked a passion for political work, especially on the constituent level,” LeBlanc says. “I wrote grants and was present at events where I got to advocate for people who can’t advocate for themselves. It was an internship that was very hands-on and served as a bridge where I could see the connection between college and real-life career experience.”

LeBlanc adds that her time on the executive board of her sorority, Alpha Sigma Tau, also enlightened her view.

“I felt very empowered,” she says. “I found my voice through a group of women and became comfortable about speaking my mind.”

“Like many things, it has taken time to learn and adopt best practices,” she says.

That’s the exact approach LeBlanc is taking in her quest to revive the Cape and Islands branch of the Young Democrats of Massachusetts. The chapter has been inactive for a while, and LeBlanc is taking some time to strategize on how to resurrect it.

“At the moment, I’m trying to observe and get a lay of the land,” she says, noting that the branch has had issues recruiting younger members. “I’m positive in six months or so we’ll have a more active chapter.”

And it may come as no surprise that “active” is the way LeBlanc says she lives her life daily, after a strong cup of coffee.

“I don’t ever want to be still,” says LeBlanc who lives with her high school sweetheart and fiancé Nicholas Borsari and their three-year-old bulldog, Gertie. “If you have the resources and the time to be involved in the community, then you should. I want to make sure when I reflect on my career that I’ve made the tiniest difference in someone’s life.”

While she mulls over the possibility of launching her own political campaign one day, LeBlanc says for now she may pursue a master’s degree in international public policy.

And her close friend Stefanski says LeBlanc will continue to be the bold personality she first met in 2016: “She’s not afraid to stand up for what she believes in even when people will try to knock her down. She believes in what she knows to be true.”