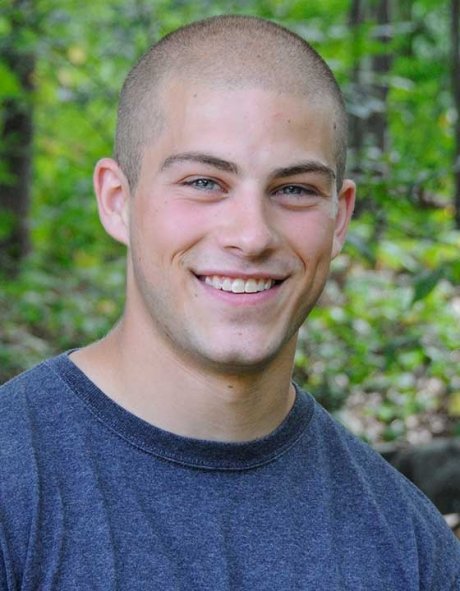 In June 2014 DeLuca, a sociology major, along with 22 other cadets embarked on a month-long mission to Macedonia. The program is called Cultural Understanding Language Proficiency (CULP). “The Army loves acronyms,” DeLuca said with a smile.

The objective was to become immersed in the local culture and to become familiar with the norms and values of a country that is not one’s own.

“The landscape in Macedonia was breathtaking,” he recalled. “It’s super mountainous, so you’ll see rivers running in-between the mountains and highways cut into the sides of the summits.”

There, he and other cadets assisted in the building of a Habitat for Humanity of Macedonia apartment building. They also served as counselors for Macedonian teenagers interested in attending college in the United States. In the mountain village of Lesnovo, the cadets played volleyball with the schoolchildren, toured a monastery and enjoyed traditional Macedonian song and dance. Finally, they spent 10 days at the Macedonian Military Academy bonding with Macedonian cadets as well as cadets from Kosovo, Germany, Great Britain, Bulgaria, Montenegro, Bosnia and Herzegovina.

“The biggest aspect of my cultural awareness experience was being surrounded by so many cadets from different countries at the military academy,” said DeLuca. “We took part in training exercises together where you had to put aside what you knew and how you trained to work together as a group.”

DeLuca said that his experiences with ROTC CULP and his degree in sociology from RIC will benefit him as a future officer.

“CULP and the field of sociology are about the study of people and their social behavior. Once you become an officer in the Army, you’re immediately going to be in charge of a platoon of 30 to 50 people. They’ll range from 17-year-olds who’ve just gotten out of high school to senior NCOs [noncommissioned officers] who have been in the Army for a decade or more. You’re their boss, their mentor, their leader. You have to know how to bond with your men and they will bond with you.”

Along with completing his degree requirements at RIC, every Wednesday DeLuca takes a three-and-a-half-hour military science course with ROTC’s Patriot Battalion at Providence College. The class is taught by officers and senior NCOs with real-world military experience.

“I’m a normal RIC student every day of the week except Wednesdays,” DeLuca said. His class in military science has given him a strong foundation as a RIC student, he said. Currently he is a junior with a 3.8 GPA. “My military science course helps me discover what type of learner I am and how to set goals,” he said. “It also helps me discover the type of leader I am. These are skills that are helpful to anyone no matter what field they’re in.”

“Army ROTC’s motto is that you’re a student first, a cadet second,” he said. And ROTC only produces officers. When DeLuca graduates, he will receive an eight-year contract as an officer in the U.S. Army. DeLuca hopes to engage in eight years of active duty.