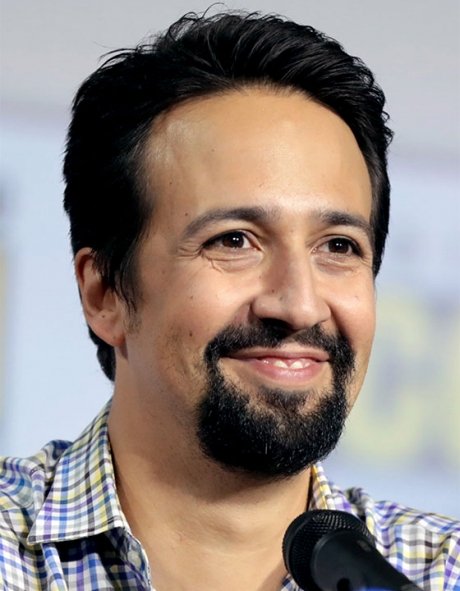 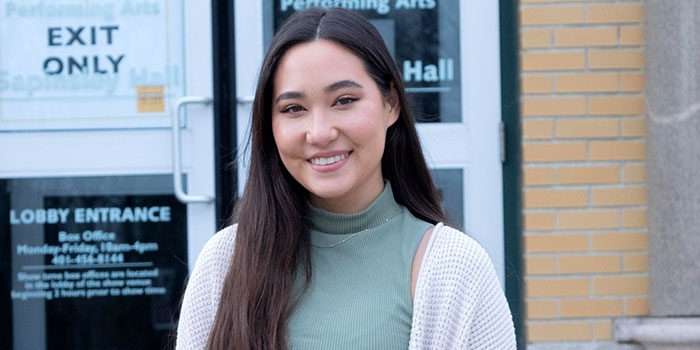 "I began dancing when I was very young, performing tinikling – the Philippine national folk dance – with my mother and my titas [aunts] at family gatherings and festivals around the state," says Alexis Von Maluski.

Tinikling involves two people beating, tapping and sliding bamboo poles on the ground and against each other while dancers step over and in between the poles. As she got older, Von Maluski also performed gymnastics, ballet, jazz, tap and contemporary dance, entering numerous dance competitions.

"When I enrolled at RIC, I chose a major in education with a minor in dance, because I didn't think it would be practical to major in dance," she says. "But when I joined the RIC Dance Company, I knew I had to switch majors. I realized how much I needed dance in my life. Now I'm double majoring in dance and youth development."

Cardente-Vessella notes, "Alexis is an exceptionally curious student and artist. Her ability to excel in a variety of dance styles, from hip-hop and modern dance to jazz and cultural dance, makes her a unique and interesting performer and dancer."

It's no surprise, then, that Von Maluski's aspiration is to teach a wide variety of dance styles to youth around the world. She particularly wants to give back to the Filipino community and work in the Philippines.

On winning the Miranda scholarship, Von Maluski says, "It's an honor to be part of a scholarship that's all about culture and representation and shining the light on minority culture. These are things that are really close to my heart and I'm really grateful to be a part of that." 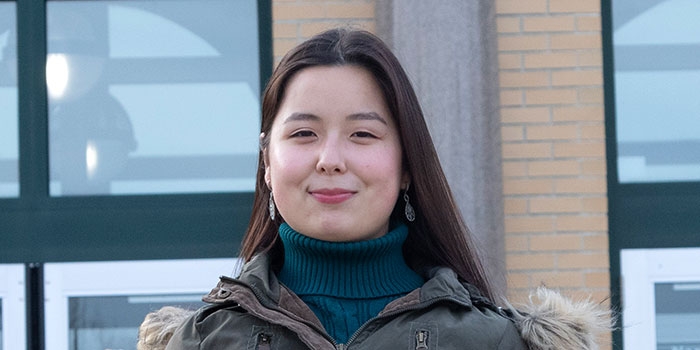 Assel Sat is an international student from Kazakhstan – the former Soviet republic, whose childhood home was often filled with music. “My father always wanted his daughter to become a musician,” she says, “so, when I was age six, he enrolled me in the Kazakh Specialized Music School for Gifted Children, where I majored in piano.” Yet Sat describes those years of training as challenging.

"It was very hard for a little girl like me to sit in one place and practice three to four hours a day," she says. "My teachers would tell me that I didn't have any talent and that I should just quit. They thought my pride would be hurt and that I would work harder. But it had the opposite effect. I lost my love of piano and switched to clarinet in fourth grade, with piano as my minor. I came to love the clarinet."

In fact, Sat excelled at her new instrument. By high school, she was competing in international competitions. In her first competition, where she was the youngest in her group, she won third place, and in every competition thereafter she placed second or third.

Then, in 2018, with her brother already in the United States attending college, Sat applied to Rhode Island College. "I sent in my audition tapes and was admitted, but my parents couldn't afford the tuition. Only my mom works in our family because my father is very ill," she says.

"The chair of RIC’s Music Department, Professor Ian Greitzer, suggested I apply for a Forman Scholarship, which I did. When I was awaiting word, I couldn’t sleep for several days," she says. "When I was approved, I was just crying. The scholarship covered all of my tuition. Now I am a Miranda family fellow, too. I feel very honored and very proud."

Along with her music performance courses, Sat takes private clarinet lessons with Greitzer. She says, "I intend to keep learning and working hard on becoming a better musician and performer and prove that I was worthy of receiving this support."

Her hope is to remain in the United States and get a permanent position with a symphony orchestra. "It may be a long shot, because positions in orchestras are limited and competition is steep," she says, "but I am reminded of the Russian saying my father used to tell me when I was struggling with piano. He would say, 'It's hard in the learning, but it's easy in the fight.' That means that the thing you are learning now that is giving you so much trouble will be easy for you in time. You just have to be patient." 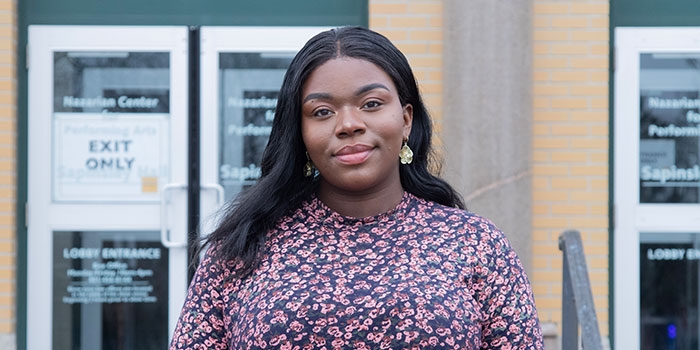 RIC alumna Viola Davis is one of Georgerinna Farley's favorite actresses and major role models. Like Davis, Farley's goal is to become a film and television actress.

"Growing up I didn't see a lot of representation of African American woman in film and television," she says, "so actresses like Viola Davis and Octavia Spencer have been a great inspiration to me."

Farley caught the acting bug early, with a particular gift for performing in front of the camera. At age eight, she attended a few weeks of acting workshops by the Children's Theatre Company. That's when she realized she had a talent for acting. By her sophomore year in high school, Farley was auditioning for any school play she could. "I really fell in love with theatre from being in those productions," she says.

When applying to colleges, Farley looked for schools with strong theatre programs. "I also needed something close to home that wouldn't put a hole in my pocket," she says. "RIC was a perfect fit. Not only did Viola Davis graduate from RIC, the college is only 15 minutes away from my home, and, compared to other schools, the cost is amazing."

Since she's been at RIC, Farley has performed in a wide range of productions, from Shakespeare to musicals. She even got her feet wet in a student film this fall called "Everyman," directed by RIC Assistant Professor of Theatre Casey Seymour Kim. Farley says she intends to use her Miranda scholarship to travel to auditions for films produced in the New England area and to pay for professional headshots.

"The Miranda family has chosen well," says Seymour Kim. "In the work I've seen her do in class and on stage, Georgerinna has a very sophisticated sense of character, good timing, curiosity and wonderful artistic discipline."

This scholarship is also a great opportunity to learn more about the industry, Farley says. All recipients of the scholarship participated in a Zoom meeting with Lin-Manuel and attended a weeklong virtual summit, where directors, writers and members of the "Hamilton" cast talked about how they as artists are making it in the industry, particularly in light of COVID-19.

"Ultimately, this scholarship is not only for me," she says, "it's for future generations of young Black actors who don't think they can make it. It's for little Black girls who don't see enough of themselves on TV or think it's a farfetched dream to be on TV and film. I want them to know that it's possible. Viola Davis showed me that it's possible, and I want to be that inspiration for other girls."