Reba Mitchell is a work of art, a study in bold strokes.

Dressed in black leather from jacket to boots, she moves with long, fluid strides. Her laughter is deep, bold, guttural. Black eyeliner forms wings below her tattooed brows; and her inky-black hair, punctuated by a white streak, is teased into a tower atop her head. ​

The daughter of musicians, Mitchell is an interesting bunch of women. She is simultaneously a rock band musician, an emcee, a salon stylist, a voiceover artist, an audiobook narrator with almost 200 titles to her name, and a vocal coach for Girls Rock! Rhode Island, a nonprofit that fosters healthy identities and empowerment in girls, women, trans and gender-nonconforming individuals through music.

When Mitchell enrolled at Rhode Island College, her thought was to become a music teacher. She did bartending to pay her way through school, often taking only one course a semester. At one point, she took a year off to tour with her rock band.

Eventually Mitchell discovered that a music education degree wasn’t in the cards for her. She took a gender and women’s studies course taught by Professor Leslie Schuster and the trajectory of her life completely changed. 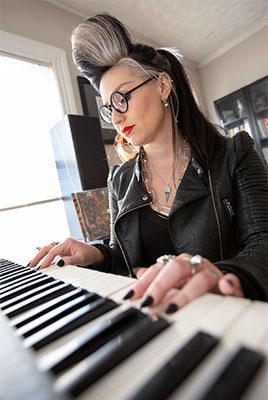 “For the first time, I didn’t feel gaslighted by society,” she said. “In Leslie’s class oppressive structures were named for me, and I realized I wasn’t crazy. She literally saved my life. I felt validated and vindicated.”

Mitchell enjoyed studying women’s issues so much that she took more courses​. “Finally I​ woke up one day and realized I had enough credits to finish college with a gender and women’s studies degree,” she said. “I was 32 years old.”

Since then, her career has orbited around gender-related issues. No matter the occupation, always at the forefront is gender equality.

“I emceed in a drag bar for many years,” she said. “It was important for me to be immersed in a different kind of performance art that played with gender, where you are able to fully create your gender expression.”​ 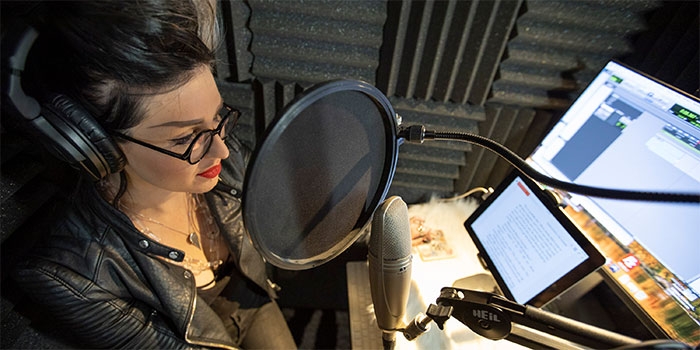 Mitchell is also a founding board member of Providence-based Girls Rock! Rhode Island, a nonprofit that offers music lessons to female-identified youth ages 11 to 18 as well as female-identified adults. Participants not only learn an instrument (guitar, bass, drums or vocals), they form a band, write a song and stage a live performance at the end of the session.

“We wanted to give youth an environment in which they could be mentored by women, experience the expertise of women, be encouraged to express themselves, learn how gender functions in society and recognize that gender identity is an asset and not a liability,” she said.​ 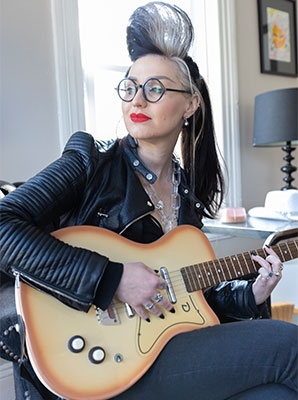 At Girls Rock! Mitchell, a classically trained singer, acts as a vocal coach and a co-leader of workshops on the history of women in music and of teenage discussion groups on gender-centric topics. With her easy rapport and strong sense of self, she couldn’t be a better role model; however, Mitchell stated that it is she who is lucky​​​. Today’s youth are more precocious, more politically engaged, more tuned in to their gender identities and nascent sexuality.

“I feel really honored to be around them,” she said. “They are the ones driving the bus in our discussions. We follow their lead.”

This year the girls will take the lead in renaming the nonprofit. The decision was made to take Rock out of the name because it speaks to a particular genre of music and to take ​Girls out of the title because it is too narrow to define the individuals they serve. The goal is to expand the notion of who feminine-spectrum people are and to make room for gender variance, such as trans men and nonbinary individuals.

“In the past five years, the world has changed so much that adults at Girls Rock! have had to catch up with the youth,” she said, “especially in terms of gender variance. We now have pronoun buttons that read she/her/they/them, he/his/they/them, which are handed out every morning during our summer camp. If the youth want to, they can grab a button and put it on.” 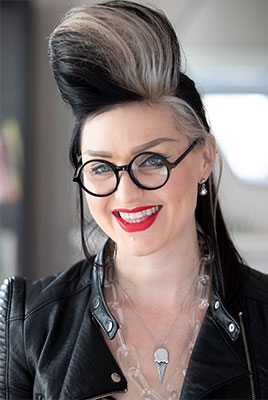 “I think we have to be mindful of whose voices are not being heard,” she said, “​whose voices we’ve accidentally left out of the conversation and we need to constantly correct the ways in which individually and systemically each of us engage in oppression even as we advocate for anti-oppression,” putting into sharp relief that the work is never done.

Mitchell feels fortunate to be part of a community of “beautiful, creative women and queer friends” who support each other’s creative practice, who work together on anti-oppression and gently remind each other where they might be remiss.

"I looooove my friends,” she said, draping her arm over the back of her chair. Then​ ​gives a warm, gutsy laugh.​