Remote Internship Brings Her Closer to Her Calling 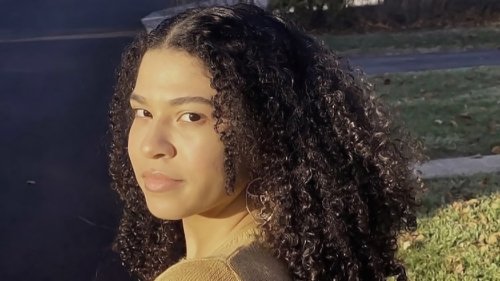 "For the first time, I don't feel afraid anymore to tell someone that I'm interested in writing professionally. That's all because of this internship."

The last place Jailene Perez expected to discover her calling was in quarantine.

This summer the Rhode Island College English major began an internship at Providence Media Group, publisher of six award-winning lifestyle magazines, including the Providence Monthly, East Side Monthly and Hey Rhody, with a readership of roughly 100,000.

Due to the spread of COVID-19, the internship has been completely online. Routinely she communicates with staff via email, Google docs or Google Meet sessions, where editorial meetings are held. "At first I felt a little intimidated, but even through the computer screen, I can feel their caring," she says. "Everyone wants to be of help to me."

The staff has also made it clear to her the weight of her position at the company.

"I thought I would be helping with simple tasks," she says. "But I was given a lot of fact-checking assignments during my first two weeks." She discovered that fact-checking assignments reflect back – for good or ill – on the magazine. "It was a constant reminder that I'm not 'just an intern.' I'm part of the team with a vital role to play," she says.

Moreover, working for Providence Media has built her confidence in her writing ability. "I'm constantly working on my writing and perfecting it," she says.

Perez's internship is part of a RIC Summer Session course (ENGL 447), also taught remotely, by Professor of English Michael Michaud, where students first work on their résumés and writing samples and then apply for internships in the community.

In January Perez landed an interview with Providence Media, she began work in early May and will end her internship in early August when her course with Michaud ends. As part of the course, she maintains a weekly journal, reflecting on her internship experience and what she has learned.

"People have often asked me, 'What are you going to do with an English degree?' I always felt like I had to have a Plan B," she says. But that all changed when she began interning at Providence Media.

"Through my supervisor Elyse Major, the editor in chief of Providence Media, I learned that I can expand on my English degree as far as I'm willing to go with it," Perez says. "I can write. I can research. I can edit. For the first time, I don't feel afraid anymore to tell someone that I'm interested in writing professionally. That's all because of this internship."

"As a proud alum, I'm always happy to host interns," she says. "Almost every semester we have at least two interns and most of them have been from Rhode Island College."

"I definitely recommend that students pick up an internship whether remotely or on site, whether they're a freshman or they're going into their final semester of college," Perez says. "It teaches you things you can't learn in the classroom, like how to be a professional in your field."