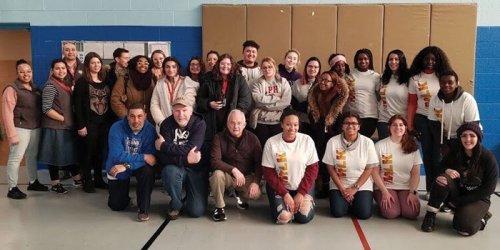 If he were alive today, slain civil rights leader Dr. Martin Luther King Jr.'s perspective would prove to be valuable during this pandemic.

Of course, COVID-19 restrictions also make it difficult to mark Martin Luther King Day as the Rhode Island College community usually does: with a day of in-person service. So, this year's observance of King's legacy will be conducted via a virtual platform and extended to a full week – January 18 to 22 – featuring themes curated from his words and active steps the RIC community can take to help bring King's dream to fruition. The campaign can be viewed here and on Instagram @ricstudentunion.

"Observing the legacy of Dr. King has to go beyond conventional ideas of service or volunteerism, especially in a year filled with widening inequity, divisive rhetoric, and a crippling number of people unemployed, food insecure, and displaced," says RIC Interim Associate Dean of Students Pegah Rahmanian, "This year we're interpreting service as a call to action."

"This year, we want it to be more than a one-time event," Salemi says. "Through social media, we hope to shift our mindset to a fuller experience that's deeper, meaningful and intentional to King's legacy."

Over the five days, social media postings will display quotes from King sharing his stance on themes of mutual aid, radical love, citizenship, how black lives matter and personal reflection. The postings will also contain action items for the RIC community to pursue.

"Extending our programming beyond one day allows for momentum to build and is symbolic of the intention we plan to put into honoring our different communities moving forward," Rahmanian explains. "Under the Office of Student Life, the work of the Unity Center, Student Activities, the Student Union, and the Military Resource Center will bring together the intersections of citizenship, equity, and student engagement. MLK Day is an example of this collaborative work."

Rahmanian describes the themes chosen for each day as reminders of practices that bring us closer to a just and caring world – a world, she reflects, that can be found in Dr. King's words.

Calls to action for RIC stakeholders include contributing to Project LETS Mutual Aid Fund or becoming members of the Urban Greens Food Co-op, a consumer governed store in Providence that offers food that is locally produced, sustainably sourced and culturally inclusive. RIC community members can learn letter writing tips and become familiar with information on the General Assembly's legislation page regarding issues they deem important.

"We hope and think that students will be drawn to the actions, the resources, and the articles offered each day," Rahmanian says. "Often we see students have a hunger for this work and to be involved, but there are very few mechanisms for them to do so."

Rahmanian is convinced that Dr. King's words and ideologies are as relevant today as ever, and adds, "The issues in front of us are systemic. We have a long road to liberation."

2021 observance of the slain civil rights leader was extended to a week at the college.