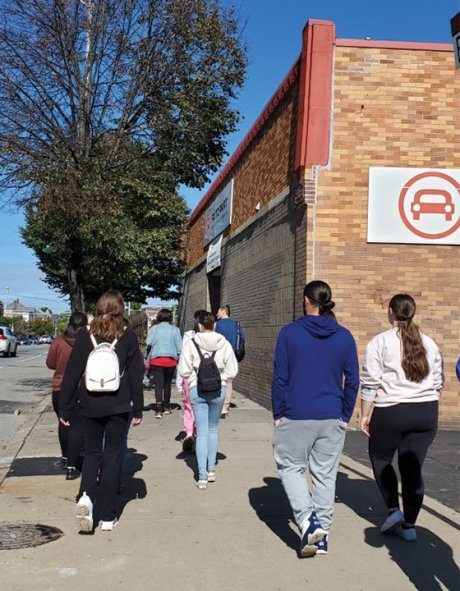 A walking tour offers perspectives on Latinx communities in Providence, using Broad Street as the pathway.

David Ramírez, assistant professor at the RIC Department of Modern Languages, teaches a first year seminar called “¿Dónde está mi gente? Latinx Culture in the US.” It’s part of the General Education Program at RIC, intended to immerse freshman students into college life. “The idea of this seminar is to invite students to explore, celebrate, question, and reimagine Latinx culture in the U.S.,” explains Ramírez. “Students can complete assignments in English or Spanish and in class they can speak either language. We are code-switching the whole time”.

The seminar will run again in the spring of 2022.

Marta V. Martínez, the executive director and founder of Rhode Island Latino Arts, has been documenting the stories of the Latinx communities in Rhode Island since 1991. She was invited by Ramírez to guide his class on one of her famous tours around Broad Street in Providence, one of the oldest Latinx neighborhoods in Rhode Island.

Eighteen students with different backgrounds – Colombian, Guatemalan, Dominican, and Puerto Rican, as well as Cape Verdean, Portuguese and Italian ancestry – join Ramirez and Martinez at the corner of Miller and Broad Streets, close to the entrance to Roger Williams Park, to spend 90 minutes exploring this iconic street that locals often refer to simply as “La Broa.”

The tour starts in front of a stretch of cracked pavement where Martinez explains that right at that spot once stood the entrance to the first Latinx bodega in the state, Fefa’s Market. Martinez refers to Doña Fefa, who came to the United States from the Dominican Republic, as “the mother of the Latinx community” in Rhode Island. She established her family in Providence in 1958 after moving from New York. Unfortunately, the building was demolished in the 1980s as the city redeveloped Broad Street.

The tour continues accompanied by the sounds of the neighborhood’s movement. Cars and pedestrians come and go, evidence of a lively community where there are now many more bodegas and other Latinx businesses along Broad Street. It’s the legacy of Doña Fefa, who always worked for and with her Latinx community.

The tour stops again in the parking lot of Mills Coffee Roasting Company, a family-owned company which has been selling coffee from many Latin-American countries since 1860.

Roy Barrios (far right with blue sweatshirt), a Colombian-Latino majoring in wellness and physical sciences at RIC, expresses how he identifies with this tour. “It’s nice because you learn more about your history, your background and not just yourself, but the whole Latino community as well,” he says.

Martinez explains that the architecture along La Broa has changed over the years and many historical buildings were torn down, although you can still see the telephone company building from the 1800s that received one of the first wired messages from Alexander Graham Bell coming from Europe. In 1984, it became the Verizon Building.

Calixto Soto, a Colombian-Guatemalan Latino majoring in health education says that he took this class because he liked the name. “I never thought that I would find this – like what we are learning now, the history of our community. I didn’t know about Doña Fefa,” he says. “I thought that Mexicans were the first Latinx community here in Rhode Island. Now that I’m listening to this, it’s crazy how one person changed a whole community like Doña Fefa did.”

The Tour ends in front of the newly remodeled Bomes Theatre, a two-story, Beaux Arts, flat-roof, brick theater constructed in 1921. Today it’s used for celebrations and events, from weddings to political campaigns.

Sophia DiNaro, who identifies as white and is majoring in film studies, feels that a class like this is essential for her “just to be a more well-rounded person and learn more about the world around me that isn’t white America or Europe.” She adds, “I find it really interesting. It’s nice to learn about other people and more of the diverse world that I’ve never been exposed to before.”