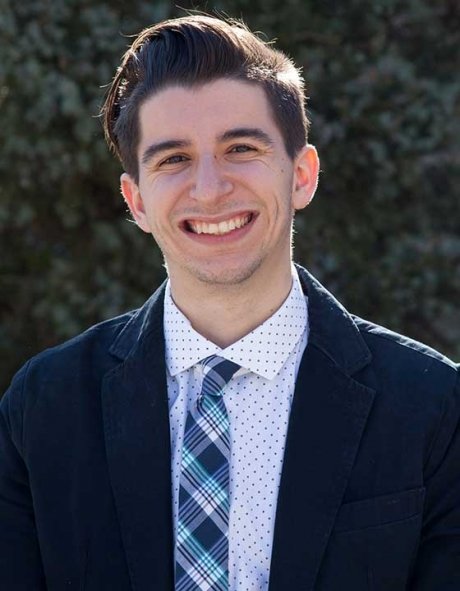 The following year he made RIC news when he became the only sophomore in the country whose film studies paper was admitted to the undergraduate conference for the Society for Cinema and Media Studies.

By senior year, his honors thesis was characterized as “groundbreaking, the kind of research more typically undertaken at the Ph.D. level,” according to Professor of English Kathryn Kalinak.

And throughout his tenure at RIC, Sherry has expanded his studies beyond film, acquiring experiences in many other areas. He is a pianist and singer, minoring in music; he has performed in RIC’s musical theatre productions for four semesters; he studied German for two years and began tutoring other RIC students in German; and he was tutor for RIC’s Writing Center.

“I’m interested in media, in general,” he said, “and the way messages are transmitted to the public. So much of our life is defined by what political figures or Hollywood figures say or do and how they create a message.”

Sherry received a firsthand look at the power of “media messaging” when he took a RIC communication course taught by Professor of Communication Valerie Endress over the winter semester. The class required that each student analyze the campaign of one of the presidential candidates and attend the New Hampshire Primary. Sherry chose to follow candidate Marco Rubio. His weeklong visit in New Hampshire included press conferences, town hall meetings and rallies. Sherry studied the core of Rubio’s campaign along with the strategies he used to sell his message; then wrote an essay on why his campaign failed.

Further hands-on media experience was gained through an internship at WJAR-NBC10. Working 10 hours a week, Sherry was charged with gathering news releases and tips in the morning that would be covered later in the day by reporters and cameramen whom Sherry shadowed. He also assisted with NBC10’s Twitter feed and served as contributing reporter for NBC10’s digital Web reporter on the coverage of political events during the Massachusetts and Rhode Island primaries.

“Joe’s story really shows how his academic experiences have led to a variety of career opportunities,” said Bohlinger. “I am very proud of his accomplishments.”

Before heading for Austria, Sherry will work a paid internship at New York City’s Museum of the Moving Image.

Sherry’s ambition is to earn a Ph.D. in film and media studies.