Professor Emeritus Richard Lobban (center) unearths artifacts dating back to the fourth century, including Meroitic pottery, a skull, a temple column and jewelry 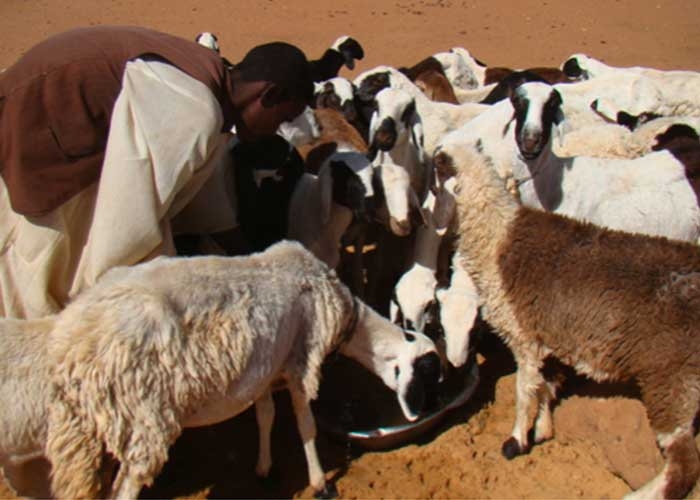 In the austere landscape of the eastern Butana desert in Sudan where there is no running water, no electricity nor paved roads, and where the few passersby are the occasional camel, goat or sheep, archaeologist Richard Lobban is unearthing the remains of a lost temple of the Meroitic Empire.

He works steadily with trowel and brush, while 10 Sudanese workers haul away the dirt. He has only two months out of the year – November and December – to excavate, before the desert sun becomes too scorching to continue. Here, temperatures can climb to 120 degrees.

It's noon on this day in late 2012. Lobban calls off work. The heat is too much. The crew drink from water bottles brought in from the nearby village of Kabushiya. Even without a road, their taxi driver manages to find his way through the desert to whisk them back to their lodgings.

Each year, for the past four years, Lobban and two other archaeologists, Eleonora Kormysheva, from the Oriental Institute in Moscow, and Eugenio Fantusati, from the University of Rome, have taken this journey to Abu Erteila to unearth a Sudanese (Nubian) temple.

Lobban is professor emeritus of anthropology at Rhode Island College. He’s been a scholar of the Sudan for 43 years and is one of only half a dozen experts in the world on Sudan history, ethnography, linguistics and archaeology.

In 2008 he retired from his full-time teaching position at RIC but describes himself as “a retiree failure.”

That year, when he heard there might be promising “koms” (Arabic for “mounds”) of archaeological interest in Abu Erteila in the eastern Butana desert, he left for Sudan.

The koms, he said, were about six feet high. Broken pottery that dated back to the Meroitic Period (fourth century BC) and to the early Christian era (fourth century AD) was found scattered about the koms.

The team hired two Russian experts to use ground-penetrating radar to determine if there were formations beneath the surface. Immediately, the radar detected underground features that proved to be walls. They did an analysis of the orientation of the walls that were angled toward the sun, and realized that beneath the surface was a solar temple.

In January 2009, licensed by the Sudanese National Corporation of Antiquities and Museums, the international team began their dig. Lobban would do much of the actual excavation, while archaeology students from Italy, Russia and America would also come to help, including RIC students Robert Borges ’06 and Andrea Dill ’07.

“Based on the radar reading, we knew we would not find the temple intact,” said Lobban. “We knew most of the original walls had been dismantled for reasons we don’t know.”

However, they did unearth portions of the walls that enclosed eight rooms. In each room he found diverse painted pottery. He also found six cooking pots sitting on a pile of charcoal.

“We determined that the northeast side of the temple had been used for the mass production of food. When the local people came to the temple on a daily or weekly basis to worship, they were also given food.”

Grinders and the bones of butchered animals, such as sheep, goats, camels and cattle, were found where they had been left next to the kitchen.

As the excavation continued, Lobban found adult skeletons identified as Sudanese. The koms had been used as a burial site.

“Most of the walls of the temple had been broken down and the temple buried six feet high," he said. "The people may have remembered that this was once a sacred place – a Howsh al-Kufar (the abode of nonbelievers) – and decided to bury their dead here on the kom.”

Based on carbon dating, the team discovered that the bodies dated back to early Christian times – the ninth or 10th century – when the Meroitic Empire had ended and the Christian era had begun, brought to the Sudan from Ethiopia and Egypt.

“We know the bodies were Christian by the orientation of the burial. Their heads were facing west, so that when they were resurrected, they would sit up and face east. In subsequent years we found more of these buried Christian Sudanese, 10 in all,” he said.

In 2011 the team opened a new 15 x 15 foot square on a kom, and there they had their most dramatic find to date. They unearthed columns from the temple inscribed with hieroglyphic writing and carved with images of deities, such as the image of the Nile god Hapy.

“Hapy is a bisexual god of the river who could create life by himself,” said Lobban. “He represents unity of the Nile valley.”

Other columns, he said, were carved with “the protective combination of ‘nekhbet’ (vulture) and ‘wedjat’ (cobra),” which Lobban said is unique to Nile valley royalty.

Among legible inscriptions, he found reference to “neb-tawi,” meaning “Lord of Two Lands,” a title reserved exclusively for royalty and nobility. “This title meant that they still considered themselves not only kings of Meroe, but of all Egypt,” he said.

The team also found a lintel used to decorate the top of a window or an entryway. It was made of sandstone and carved with a solar disc and a wing. The lintel was virtually identical to those found in other Meroitic solar temples dedicated to the sun god Amun.

Based on all of these findings, his team was able to confirm, at last, that they were at the site of an ancient Meroitic temple that had not been otherwise known or recorded.

Lobban’s reaction? He gave a wry smile. “Here I am reading hieroglyphics on a column that is 2,000 years old and that no one has seen before. That’s a pretty good deal,” he said.

In future seasons, he hopes to excavate further and deeper and find still more of the missing pieces of this temple. He said, “There’s a lot of African history just sitting there. Meroe was a classical civilization. They have a writing system that’s never been translated. There’s a lot of research work to be done.”

Back at Rhode Island College, anthropology students Adam and Laura Gerard – husband and wife – work with Lobban to translate the Meroitic language. Laura described Lobban as a fascinating man. She said, “I heard the Lobban legend in the anthropology department, long before I met him.”

“Legend is he was a journalist in war-torn countries and that he helped liberate people in the jungles of West Africa,” she said.

Lobban modestly confirmed that these past exploits were true.

Then she added, “He is also known as the modern-day Indiana Jones.”

Lobban is founder, first president and executive director of the Sudan Studies Association. He works at the Office of Naval Research in Newport, R.I., where he does research on the Sudan conflict. And he teaches at the Naval War College “African Security and Transnational Threats,” “African Religion and Politics,” “The Governance and Economics of Africa" and “African Culture and History.”

He has also taught at the University of Khartoum and the American University in Cairo and published scores of articles, reviews, book chapters, encyclopedia entries and books on the Middle East.

Adam Gerard likened his mentor to the “greats of ages past” – great in knowledge and great in building bridges of cross-cultural understanding.

Donations to the archaeological team’s expedition may be made to the Sudan Studies Association at www.sudanstudies.com.