During a routine health screening, Sgt. First Class Amanda Weber was diagnosed with multiple traumatic brain injuries. After serving for 14 years in the Army, she was told she would have to retire. But the Army had been her life.

“I grew up with a single father,” says Weber, a student veteran at Rhode Island College. “His deepest regret was not being able to serve. He talked about the military all the time. I joined because I wanted to do something that mattered. I wanted to prove something to myself and I wanted to make my dad proud. When I joined the Army, it brought us closer.”

Weber enlisted at age 18 and served from 2005-2019. While on base in Honduras, Central America, she was flung from a vehicle and lost consciousness. It would be the first of several traumatic brain injuries (TBI’s).

“After you have a TBI, you lose some of your balance and coordination,” Weber explains. “That leads to more falls and TBIs. My thinking became unorganized. I would lose my words and train of thought. I couldn’t remember sometimes what unit I deployed with. It was getting scary.”

But leaving the Army was even scarier. Weber had hoped that the military would be her lifelong career. “She had served two tours in Iraq. She had worked as a logistics specialist, ordering and tracking shipments of supplies. She was a recruiter, deeply involved in the lives of future soldiers. And she was a recruiting station commander, managing recruiters.

“I loved being a leader,” she says. But that was coming to an end.

Prior to her discharge, Weber was treated at Walter Reed Medical Center for wounded, injured or ill soldiers. For nine months, she was seen by a speech therapist, a physical therapist, an adaptive technology therapist and a recreational therapist. It was the latter, she says, that saved her life. “I got involved in noncontact boxing, rowing, paddle boarding and horsemanship therapy,” she says. It pulled her out of depression.

The Providence VA Medical Center doesn’t have a recreational therapy program, she says, yet recreational therapy is an evidence-based, highly effective treatment for vets battling psychological and physical illnesses and other disabling conditions. A recreational therapist creates or coordinates events with local adaptive sports and recreation programs and sends event information to the veterans who belong to that VA.

“If a veteran shows interest in a particular hobby and it’s something they need for therapy in their life – meaning it gets them outdoors and allows them to be more active – a recreational therapist can purchase equipment or gear for them,” Weber says. “By not having a recreational therapist at the Providence VA, veterans aren’t afforded that opportunity.”

Since leaving Walter Reed, Weber has been involved in fly fishing (upon the urging of her best friend and fellow vet), surf therapy, kayaking, archery and tricycling – all designed for vets with disabilities.

“It doesn’t matter what disabilities you have,” she says. “For instance, there were multiple vet amputees learning to surf alongside me. Recreational therapy focuses on your strengths and not your disabilities. You realize you can do more than your body and mind thought you could.”

Recreational therapy also helped Weber “get out of the house and out of her head” by allowing her to connect with other veterans. “At these events, I met other veterans with TBI,” she says. “It was nice not having to explain myself, like why, in midsentence, I forget what I’m talking about or can’t find the right words or why my brain is hurting and I’m having migraines or mood swings. It was freeing. You feel understood. And you’re doing activities where you cheer each other on.”

Currently, among her other classes, Weber is enrolled in two Health and Physical Education courses – a swim class and a restorative yoga class. It’s the least stressful semester I’ve ever had,” she says. Restorative yoga is a style of yoga that helps the body rest, heal and restore balance.

Weber’s life is now all about balance and helping other vets achieve the same. 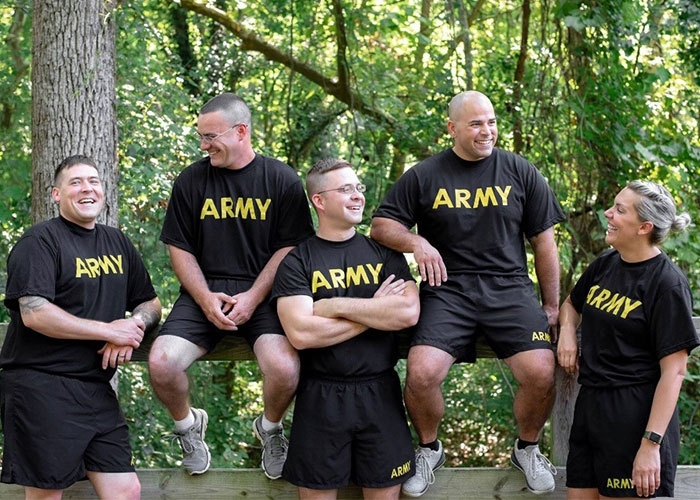