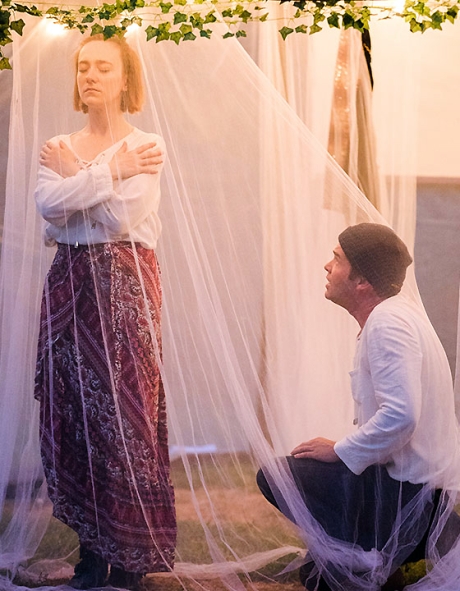 “[Shakespeare] breathed upon dead bodies and brought them into life.” — Ralph Waldo Emerson

We don’t know much about the merry band of actors for which Shakespeare wrote his earliest plays but it’s likely they were versatile players, traveling from place to place, like Starling Shakespeare Company.

Kennedy describes Mackinac as “a small, quaint, beautiful island but highly trafficked by tourists. There are no motorized vehicles but a lot of horse-drawn carriages. And there’s a beautiful, open, public park that is just begging for performance.” (In photo above, Kennedy plays Juliet in the park.)

Last summer, the troupe of five performed “Much Ado About Nothing” and “Romeo and Juliet” four times a week during the month of August. This summer they’ll stage four performances a week of “Macbeth” and a “Midsummer Night’s Dream” in August. In addition, the company has added two weeks of touring to their performance schedule. During the month of July, they’ll travel along the east coast up to Michigan before taking the ferry to Mackinac Island.

“I love the lifestyle of traveling and performing,” says Kennedy, whose father was once a touring puppeteer. Her dad also helped design and build their sets. But like Shakespeare, Kennedy’s company doesn’t use of a lot of scenery and props. Instead, they allow the identifying information in the dialogue itself to help the audience picture the scene onstage.

Sets are designed to break down easily and costumes are made to be taken on and off easily. Because each actor plays multiple roles within the same play, both male and female, their costumes are kept simple. “We don’t hide the fact that we are actors telling a story,” she says. “So, in ‘Macbeth,’ when I walk on stage wearing a purple skirt, you know I’m Lady Macbeth. When I come in wearing a green vest, you know I’m the Thane of Ross.”

As a RIC double major in English and theatre, Kennedy says she was inspired by RIC Associate Professor of English Jennifer Holl, who taught courses on Shakespeare and became her thesis advisor. After graduating from RIC, Kennedy was invited by Holl to join her “Shakespeare’s England” summer course. They were traveling to England to retrace the steps of Shakespeare.

“Being able to see the places where his shows were actually performed and becoming more entrenched in the culture in which they were written gave me a deeper understanding of his plays and their history. It was a wonderful experience,” she says.

Dr. Holl also recommended that Kennedy apply to graduate school at Mary Baldwin University. That’s where Kennedy met Lillis. They both graduated in 2020 with M.Litt./M.F.A. degrees in Shakespeare and performance.

As owners of their own company, these women wear a lot of hats – from producing to acting to directing – but they wouldn’t have it any other way.

In the fall and winter, when they’re not on the road, Kennedy and Lillis offer educational residencies on Shakespeare at various schools. That included a workshop this year in Holl’s class. “Dr. Holl has such a knack for bringing these texts to life and treating them like they’re not just words on a page but tools for performance,” Kennedy says. Likewise, Kennedy intends to make her passion for Shakespeare a lifelong career.