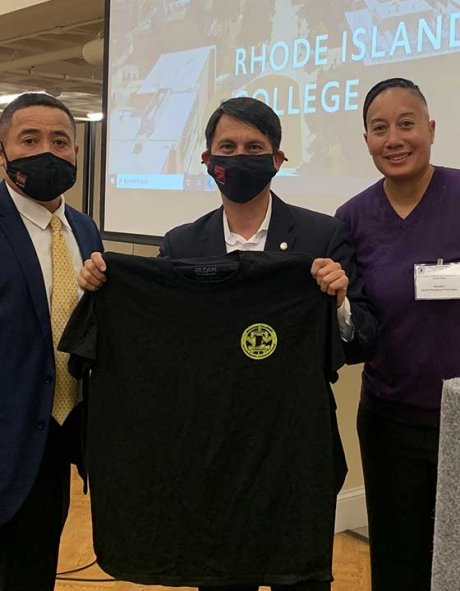 Since George Floyd was killed in 2020 at the hands of police officers in Minneapolis, law enforcement organizations across the nation have been working to build greater trust and legitimacy within communities they’re sworn to protect and serve.

The Rhode Island Guardians Association (RIGA), a nonprofit that represents the concerns of African-American, Latino and other criminal justice practitioners of color, is one of those organizations examining how justice reform looks after Floyd’s death. That topic was the focal point of RIGA’s third-annual mini-conference, which took place at Rhode Island College in August.

“The conference had been in the works since May and RIC accepted the invitation to co-host because the college is committed to promoting candid dialogue on police reform,” says RIC Chief of Police James Mendonca. “In the wake of the George Floyd incident, there have been increased demands for the implementation of procedural justice initiatives, and for greater transparency and accountability among law enforcement agencies.”

“In my opinion, those two particular trainings complemented each other regarding implicit bias and how it can affect our actions and decisions,” Mendonca says. “For example, service calls for ‘suspicious persons’ may be motivated by bias on the part of a complainant, and without proper policies and training, police officers may unsuspectingly align their perceptions with such complainants and unwittingly engage in what’s termed 'profiling by proxy.’”

The conference also featured keynotes from Ronnell Higgins, chief of police at Yale University; Joe Reddish, chair of the Rhode Island Commission on Prejudice and Bias; and Christina Fernandes, a University of Rhode Island student whose research has centered on mandating police to wear body cameras as a way to reduce tensions between general public and law enforcement.

Mendonca says there’s no specific timetable for building cultural competency, but vows that it must be strengthened.

“A police department must be resolute in developing an understanding of the various cultures within the communities they serve and that can only be accomplished by encouraging police officers to actively participate in activities that promote community engagement,” Mendonca says. “Change happens at the speed of trust and the timeframes within which positive outcomes are discernible depend upon the agency’s commitment to change and how effectively it is reflected in its day-to-day operations. Here at Rhode Island College, we must continue to foster a safe, secure and supportive environment where our college community can develop an understanding of all cultures and where diverse cultural expressions are not suppressed due to fear or trepidation.”