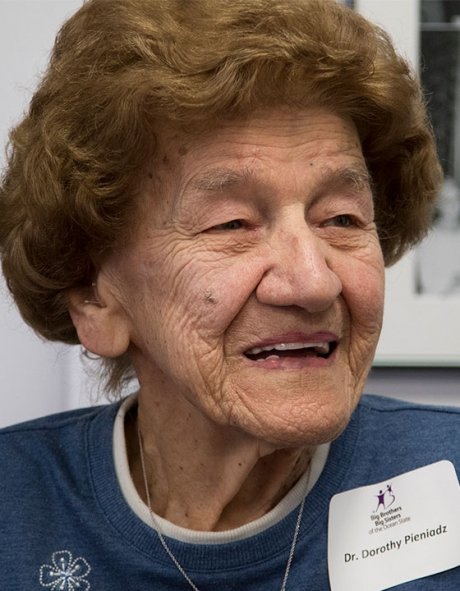 Back in 1956 when RIC was still called RICE, tuition was $25 and students were predominantly Irish Catholic women studying to be teachers, Dorothy Pieniadz was hired as the first dean of students. It was a time when gender, race and other diversity issues were being questioned.

In this article, Pieniadz traces the first birth pangs of diversity and inclusion at Rhode Island College. First published 10 years ago, this article is being reprinted in honor of Women's History Month.

"I remember during my interview, President Bill Gaige said to me, 'I wonder what the faculty would think of me hiring a woman.'"

"And I said, 'Are you hiring a gender or a person to fulfill a certain role? There will be times when we won't agree, but not because I'm a woman and you're a man.'"

Only 32, what the new dean lacked in age, she made up for in outspokenness. Now 87, she remains a spirited personality – intelligent, fearless, independent, unconventional.

She says, Gaige prided himself on the growth of diversity at the college. “When URI was criticized for being too Protestant and RIC for being too Catholic, Gaige hired the first Mormon,” she says. He also hired the first faculty member of color – Bob Amos, a Black professor of psychology.

“Amos came in 1956, the same year I was hired,” she says, “but he couldn’t find a room near the college where he would be welcome as a tenant.”

So when Pieniadz rented an apartment near the college, she informed the landlord about her independent lifestyle and told her, "Before you give me your final say so, I want you to know that I will have people of all kinds and colors coming by."

Amos was the first friend Pieniadz made at the college, and he, along with other RICE faculty, would gather at her apartment.

The lack of racial diversity was also apparent in the student body. Until 1959, the college had graduated less than 10 students of color.

"The college justified not admitting these students because they couldn't find employment for them upon graduation," Pieniadz says. "It was true that Black students had to go to the South in order to teach. It was the only place they could get a job. But Charity Bailey, a Black student, started The Little Red School House in New York and later received an honorary master's degree from the college."

Pieniadz also tackled issues involving disabled students. She had a lengthy conference with the principal of Henry Barnard School and a committee as to whether or not a student who used a wheelchair should have her practicum at Barnard. They didn’t feel that Barnard was equipped to handle a disabled student.

Pieniadz asked whether the real issue was that Barnard schoolchildren had never seen a teacher in a wheelchair. It could be the best thing for these kids, she says, to see a disabled person in front of the classroom.

Not averse to aiding student uprisings either, Pieniadz took part in a student-led effort to get rid of compulsory chapel, by advising the students to continue to attend chapel but to sit with their heads down in an act of noncompliance.

Then she went to Gaige to tell him what she had done.

"I figured when he got wind of it I'd be fired, so, I let him hear it from me," she says. "He was angry, but he was smart enough to know that compulsory chapel wasn't the answer. Change was needed."

Pieniadz says her open-minded attitude went back to her upbringing. She grew up in Buffalo, New York, in a neighborhood she described as "middle working class, mixed with the fairly comfortable."

"Every Friday evening, I had Shabbat with my Jewish neighbors," she says, "and they, in turn, would lift their windows to smell what my Polish mother was baking. In the house behind us, I babysat the Meindl boys, who were German. The neighbors to our right had roots in England and Scotland. When I received a fellowship to travel to Europe following my doctoral studies, I lived with their uncle." 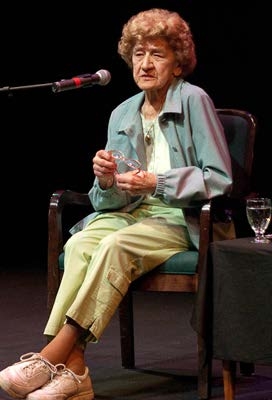 She also credits her educators at Columbia University's Teachers College for opening her mind to issues she had never considered before. Traveling to other countries also informed and transformed her thinking.

"I wish everyone a chance to leave this country and to be exposed to other people. You gain a better perspective of this country, and you'll never again want to close yourself off," she says.

From 1959 to 1962, Pieniadz led The Experiment in International Living with programs in Germany, Poland, Czechoslovakia and Russia. She also initiated RIC's first study abroad program in 1974 to Jagiellonian University in Kraków, Poland, in coordination with the Kosciuszko Foundation study programs. She remained director of study abroad for 10 years. Pieniadz speaks German, Russian, Polish and some French.

When the former dean is asked if she thinks the college has advanced in racial diversity, Pieniadz takes a global perspective:

"Institutions don't exist in isolation; they reflect the thinking of the country. We've made progress, but not like we should. The color issue remains a challenge."

When asked what barriers students should focus on breaking down today, she replies:

"Today's students owe it to themselves to be as informed as possible. Four years of college is now the equivalent of a high school diploma. It's just the beginning of your growth." She warns against relying on the easy acquisition of information. She says students need to know how to gain information beyond what they can retrieve quickly from the Internet. Every day she reads the New York Times and the Providence Journal.