Meet Our BPS Students: Adult Learner Strives to Shake Off Imposter Syndrome by Finishing Her Degree 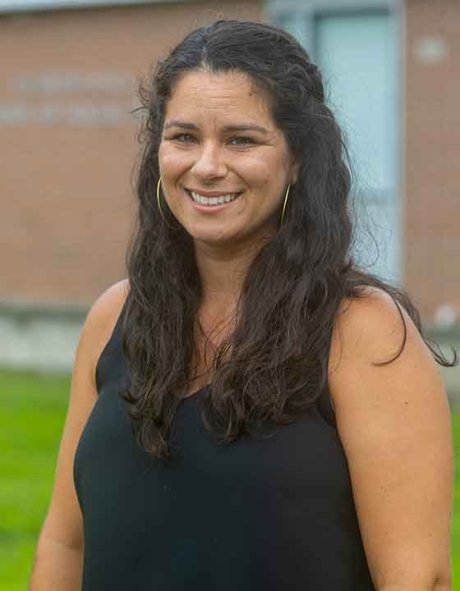 Earning a degree will help to ease her transition into becoming an advocate at a local healthcare agency.

There are more than 100,000 Rhode Islanders with some college credits, but no degree. The new Bachelor of Professional Studies (BPS), Rhode Island College’s first fully online degree completion program for adult learners, is built for them. The first BPS cohort launched last spring. This story is part of a series profiling some of the students in that cohort who have found their path to career advancement through RIC.

When Nicole Haas-Rodriguez sits in her office at a healthcare agency in Providence, she feels like she doesn’t belong.

“I have imposter syndrome, which is the feeling that I got my job by accident and am pretending to know what I’m doing,” says Haas-Rodriguez, who works as an executive assistant in marketing. “I told a co-worker about the imposter syndrome and she asked, ‘So, that’s why you don’t keep anything at your desk?’ Although my boss loves me and tells me I’m doing great work, I still think to myself, ‘You’re a college dropout and at some point you’ll be asked to leave.’’’

For Haas-Rodriguez, 35, earning a degree through Rhode Island College’s new Bachelor of Professional Studies (BPS), equates to workplace legitimacy. Haas-Rodriguez is one of 13 women in the first cohort of the BPS program’s social services concentration. This fall, the program has added a concentration focusing on organizational leadership.

Her current duties entail managing daily schedules for her company’s vice-president and his direct reports and supporting her department with internet technology, social media campaigns and volunteer service projects.

With a degree, she plans to transition into a healthcare advocate role.

“As an advocate I can get involved with the more clinical side and get out in the community to make connections with nonprofits in the state,” Haas-Rodriguez says. “I want to pick up more skills to become more professional at what I do. What I’ve learned about the BPS program is that many of the participants are doing the jobs they want but aren’t necessarily being appropriately compensated or don’t have the titles they want. We can’t get to the next level without a degree.”

If the BPS program wasn’t fully online, earning a degree might have been impossible for Haas-Rodriguez. She currently has 75 credits out of 120 needed to graduate.

“When you’re working full-time, it’s pretty tough to take four hours out of your day to go sit in a classroom,” she says.

A Las Gatos, Calif. native, Haas-Rodriguez attended the University of Oregon after completing high school in 2005. She bowed out after a quarter because she didn’t consider it a good fit. She returned to California to work in an afterschool program and take community college courses on the side.
“Sometimes, my job responsibilities would conflict with class time,” she says. “And online classes weren’t a thing yet. All I knew is that I didn’t want to go to another big four-year school without knowing what I wanted to do, and I didn’t want to pay for it.”

After moving to Rhode Island in 2014, Haas-Rodriguez worked in retail and served as operations director for a summer leadership program benefiting outstanding high school and college students. In 2018, she started taking one-off courses at the Community College of Rhode Island (CCRI) focusing on human and social services.

It was CCRI advisors who made Haas-Rodriguez aware of RIC’s emerging BPS program.

“When I applied to enter the program, I thought here’s something I can get into and stay focused,” she says. “It also sparked my interest because it’s geared toward adults who have responsibilities outside of just being a student. I think those responsibilities are respected and with four classes a semester, I know I’m going to be done in a year and a half. That’s very motivating to me.”

Haas-Rodriguez, who lives in Warwick with her wife, Ashley, and their two cats Jazz and Jackson and dog, Josie, says her wife has been a key ally in her bout against imposter syndrome.

“She understands why getting a degree is important to me,” Haas-Rodriguez says. “She has picked up a lot of slack on nights when I’m furiously writing a paper, studying or on Zoom until 9:30 at night. When I got accepted into the BPS program, I was hooting and hollering about it, but my wife kept calm and said, ‘Of course you got in.”’

Read other stories in this series: Kieshana Dawkins