A New Cohort of Miranda Scholarship Winners Takes the Stage

"The way the (Miranda) program is laid out, I'll be able to meet people in the performing arts industry, so I'm looking forward to that opportunity," says scholarship winner Sofia DaSilva (pictured above during a performance).

For the fourth consecutive year, first-generation and underrepresented students in the performing arts at Rhode Island College have been awarded scholarships through the Miranda Family Scholarship program.

The three students selected to receive about $14,600 in scholarship funds during the 2021-22 academic year are two rising juniors and a graduating senior interested in careers in music, theatre or dance. The scholarship also comes with mentorship, networking and performance opportunities, as the Mirandas consider the awardees part of "the family."

After performing in “Little Shop of Horrors,” her first show at Beacon Charter High School for the Arts in Woonsocket, DaSilva knew she had been bitten by the acting bug.

“The audience was so lively and I felt such an adrenaline rush,” DaSilva recalls. “That’s when I knew I wanted to do this for the rest of my life.”

DaSilva, 21, says she’s the only member in her family to consider the performing arts as a career option.

“When I first talked about being in performer in middle school, none of my family members had ever gone to see a theater production before,” she says. “They’ve come around now after seeing me on stage and have supported me.”

Similarly, DaSilva is excited about the support she’ll receive from the Miranda scholarship.

“The way the program is laid out, I’ll be able to meet people in the performing arts industry, so I’m looking forward to that opportunity,” she says.

A RIC junior, DaSilva has acted in at least 10 productions, singling out her fall performance in “The Moors” as her most successful to date.

“I had to do a great deal of psychological analysis to play my character, Emilie,” she says. “She’s a governess who takes a job at this manor in a dangerous environment. Under a set of supernatural circumstances, she’s trying to find power within herself.”

When it comes to acting, DaSilva says she’s often trying to find vulnerability within.

“I want to be honest with my emotions while performing,” she says. “It takes a lot of work to bring that out.”

As she heads into her senior year at RIC, DaSilva says she wants to explore every aspect of theater, from management to costume design. She also intends to work on being more resilient.

“When you join an actor’s union, it’s very competitive,” she says. “I want to learn to be resilient in the face of rejection and bounce back. That’s something I need to get used to.” 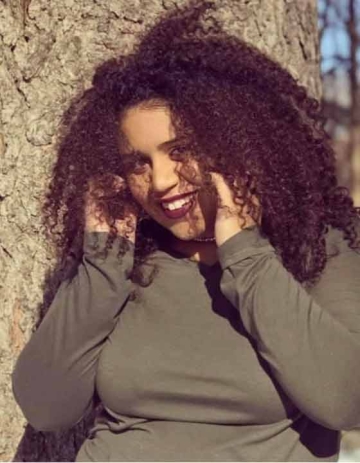 At RIC, Jefferson has acted in eight productions, and in each of them she experienced severe stage fright.

“I’ve always had a lot of anxiety and stage fright before a show begins,” she says. “When I’m on the stage I’m OK, but after the show I’m nervous again.”

This has been the case since Jefferson began acting in musicals in eighth grade.

“I’ve tried meditation, going to therapy and practicing my lines over and over to deal with the stage fright,” she says. “The more exposure I have to theatre, the better it gets each time.”

Jefferson says she’s at her best when she’s singing.

“Singing is my favorite thing to do because I’m good at it,” she says. “I like that I have a low voice. I can sing as deep as some of the men in our music, theatre and dance department. If they’re looking for someone to fill a tenor part and can’t find anyone, I’m like, ‘OK, I got it.”’

Jefferson was hesitant to apply for the Miranda Scholarship, figuring it was out of the realm of possibility, but family and friends urged her.

“I’m elated to win the scholarship, which I really wanted to help my resume stand out,” she says.
“It will offer me opportunities and help distinguish my credentials against other people who might have the same amount of experience or more.”

After graduating from RIC, Jefferson plans to move back to her home state of Connecticut, but may return to Providence later. She wants to continue her work with acting and costume design and consider stand-up comedy and commercial voiceover work.

“I want to strengthen all the talents I have,” she says. “And I’d like to be locally famous for what I do.” 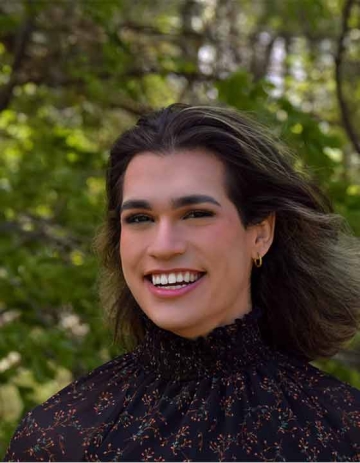 One day, Garcia hopes to be a trailblazer for trans representation in entertainment.

“If you watch award shows like the Tonys, Oscars or Grammys, you don’t see trans people winning anything,” says Garcia, who identifies as trans feminine. “Winning this Miranda scholarship made me feel that trans people are starting to be seen more, and it’s another step toward the representation that I’m trying to create.”

The East Providence native says the scholarship was one of the factors involved in their decision to attend RIC.

“When I read about the scholarship, I felt that I fit the criteria,” she says. “I knew it would be a big financial help and allow me to get a good education while staying local. I’m so proud to have won and take advantage of the opportunity that comes along with the scholarship, such as possible workshops in New York City.”

As a youngster, Garcia used to impersonate Michael Jackson, gearing up for an appearance on American Idol.

“I was a huge fan of his and would practice his songs, thinking I was going to be on Idol one day, but I was too young,” she says.

The 20-year-old Garcia now says she’s too busy to audition for Idol. Fashion design and choreography are priorities on Garcia’s list.

“I’m working on completing a self-study about fashion design and construction,” she says. “Choreography is also a new thing I’m getting into.”

In fact, she’s working on creating a dance for next year’s student showcase that highlights the issue of trans prostitution.

“I want my work to show what trans people go through, with prostitution being one of the few jobs they can get,” she says. “That’s the type of choreography I’m able to do that you don’t see in musical theater now.”