“I like to go into inner-city schools to talk to children and demystify the idea of who can be a doctor,” says Dr. Moreira ’03 (left of photo) (Sarah Ebirim ’22, right)

In the operating room there is a glass divide. On one side of the glass is a computer where hospital staff examine patients’ charts, ultrasounds and CAT scans. On the other side is where surgeries take place.

There, a resident is leading an amputation on a patient’s leg. Sarah Ebirim ’22 stands behind him, observing what’s being done from an overhead TV screen. Dr. Carla Moreira ’03 hurries in to check on the resident’s work. She glances over at Ebirim. “You can stand closer, Sarah,” she says. Ebirim moves up until she’s standing across the table from him. As he cuts through the bone with a saw, her goggles protect her eyes from the splattering blood.

“I absolutely love medicine,” she says.

For a full semester, Ebirim has shadowed Dr. Moreira, a RIC alum and vascular surgeon, at Rhode Island Hospital. On Mondays she observed her surgeries and on Fridays she followed her at her clinic. Ebirim logged over 100 hours shadowing Moreira in preparation for medical school.

Ebirim’s aspiration is to become a surgeon like Moreira only she’d like to specialize in neonatal surgery. She graduated from Rhode Island College this May at the top of her class, with a 3.9 GPA, a major in chemistry and a concentration in biochemistry. Born in America but of Nigerian descent, Ebirim speaks both English and Igbo and is working toward becoming more fluent in Spanish.

With admiration, she notes that Dr. Moreira speaks four languages. “It’s so welcoming for patients to have a doctor who can speak in their native tongue. You can see the connections she’s able to make with her patients when the barrier of language is removed.”

Fluent in Cape Verdean Creole and Portuguese, with a working knowledge of Spanish, Moreira immigrated to the United States from Cape Verde at the age of 10. She graduated with honors from Rhode Island College in 2003 with a B.A. in chemistry and a concentration in biochemistry.

In 2008 she received her M.D. from the Warren Alpert Medical School of Brown University, ranked among the top 20 medical schools in the nation. Today she works as a surgeon, researcher and teacher in the Department of Surgery at Brown’s medical school.

“I really enjoy teaching and interacting with students,” Moreira says. “But it’s rare that I’m in the classroom teaching. Most of the real teaching is done at the beside or in the OR.”

According to Ebirim, Moreira likes to challenge her students and works hard to give her students opportunities to grow. “Dr. Moreira is someone I really look up to. I can only hope to be like her someday,” she says. 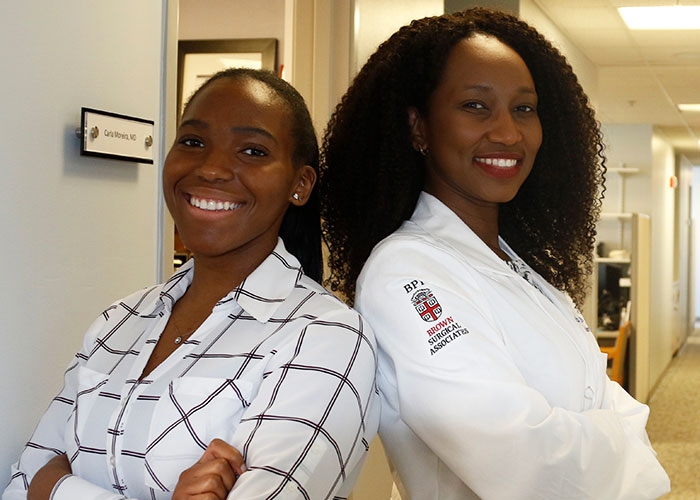 For Moriera, mentorship is a way to give back.

“Mentorship is critically important to me,” she says. “Mentorship helped me with every advancement I made in my education, from Rhode Island public schools to Rhode Island College to Brown University. When people see other people who look like them or who came from a similar background doing what they thought was impossible to do, it motivates them.”

Moreira is also the Department of Surgery’s diversity officer, leading efforts to recruit and retain underrepresented minority students and faculty in academic medicine.

“As diversity officer, I’m not only involved in the hiring but in creating a culture that says we value diversity,” she says. “I look at all levels of the Department of Surgery, from residents to faculty and staff, and try to always be that voice that says, ‘How can we do better in creating an environment that is inclusive, an environment that people from different socioeconomic, racial and educational backgrounds can add to the diversity and culture of this institution?’”

“I like to go to inner city schools to talk to children and demystify the idea of who can be a doctor,” she says. “I know there are hundreds of young people in Rhode Island public schools who belong at Brown University or other top Ivy League institutions in this country. Given the opportunity, they would excel. They would even go beyond what I’m doing now. That motivates me to never let an opportunity pass where I don’t encourage or say, ‘This is how I did it and this is how you can do it.’”

“Dr. Moreira told me that the group of incoming residents this year for Brown’s medical school is the most diverse it’s ever been,” Ebirim says. “I know when I start my residency, it’s going to look even more colorful by the time I get there.”

But first Ebirim will take a gap year to gain more pre-medical shadowing experience. Through the Atlantis Program, she will spend three weeks in Spain shadowing doctors while brushing up on her Spanish. Then she’ll visit Nigeria. Ebirim has applied to more than 20 medical schools.