What’s Better Than Reading About History? Digging it Up Yourself 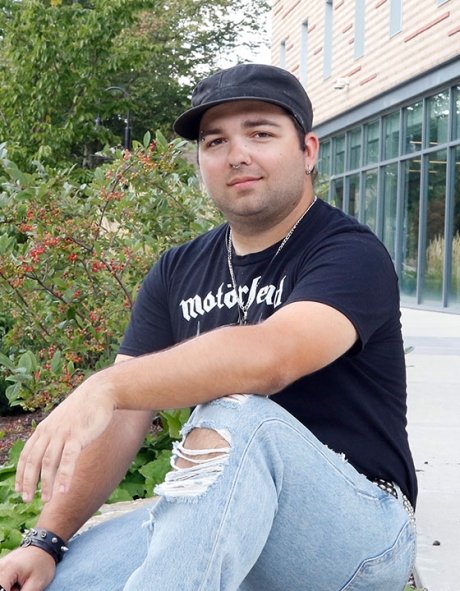 Immersive Experiences in Education: Aidan Mooney ’22 rounded out their history major by joining an archaeological dig.

This summer Aidan Mooney ’22 toiled in 100-degree temperature, breaking up dirt with a pickaxe at an archaeological dig site in Italy. By day’s end, the 24-year-old flopped in a room without AC shared with two other transplanted Americans.

Mooney had enrolled in The Archaeology Field School, a summer study abroad program in Italy run by The Umbra Institute. From June 1 through July 31, the history major, with a minor in art history, was part of a 21-member team of archaeologists, professors and students investigating an ancient kiln site in a town called Castiglione del Lago.

According to Mooney, lime kilns were used by medieval people who settled the area after the Roman period. The kilns were used to create quicklime, an essential ingredient in cement and mortar. Quicklime was also used to make glass and high-grade steel and iron, to treat waste water and to bury victims of deadly diseases such as cholera and plague to prevent the disease from spreading in the air.

Anticipation of what the team might uncover near the kiln site was as thick as the heat, but the dig, which was scheduled to run for six weeks was delayed three weeks due to government bureaucracy. In the interlude, Mooney took classes in Italian history and archaeology, and explored numerous museums and historical sites.

Once the team got the go-ahead to start the dig, they ran a GPS survey of the site, mapped out two areas about eight meters by eight meters and used an excavator to remove a foot of the top layer of soil. Once the top layer was removed, the team worked with pickaxes to slowly break up layers of the hard-packed ground an inch at a time.

The clack-clack of pickaxes went on from 7 a.m. to 3 p.m. during two of the hottest months of the year. Though the work was tedious, Mooney was happy to be able to do more than read about history – “I wanted to hold it in my hands,” Mooney said.

The team unearthed prehistoric limestone about five million years old imprinted with the fossils of hundreds of fish, indicating that the area had once been an ocean. They also hit upon a British mortar shell from WWII.

“We had to call in the Army to dig that up,” Mooney said. “That meant our dig had to stop. With the late start and the early end, in total we did only nine days of digging.” But Mooney didn’t let the last 10 days go to waste. Traveling around Italy with friends filled their days, and Mooney has plans to attend The Archaeology Field School again next summer as a research assistant.

“To see places you’ve only read about and to see how other people live is an opportunity no one should pass up,” said the history aficionado.