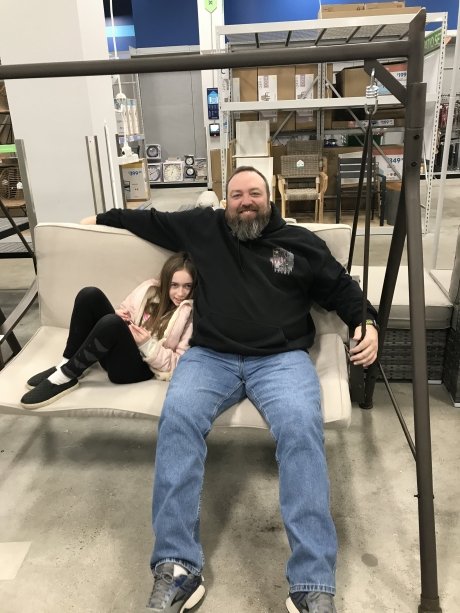 Randall Shaw has persevered and earned his degree after initially matriculating at Rhode Island College more than a decade ago.

Life threw Randall Shaw yet another curve ball after he was laid off a warehouse job in 2019. The first curve ball arrived more than a decade ago when Shaw was forced to give up pursuing an education degree at Rhode Island College after his wife Kellianne became pregnant with their daughter, Aileigh.

"I was two courses away from completing my education degree, but it was impossible to do student teaching and support a family, so I had to drop out," Shaw recalls, noting that he got a job in automotive retail to make ends meet.
Thanks to a program Shaw discovered through RIC's Military Resource Center, the 43-year-old former Army mechanic was able to return to RIC and will soon claim a bachelor's degree in environmental studies during 2021 commencement exercises.

It's a journey Shaw couldn't have fathomed two mere years ago.

"I never thought graduating would be an option for me," says Shaw, a North Smithfield native.  "Once I got it in my mind that I could return to college, things just fell into place."

Through the Veteran Readiness and Employment (VRE) program, participants like Shaw receive comprehensive services such as full college tuition and fees, career counseling, a monthly living stipend, support services and case management and employment assistance after graduation. The goal is to help the veteran achieve and maintain suitable employment as a step toward securing a civilian career after serving the country.

Shaw, who was stationed at Fort Hood Army base in Texas for three years after graduating from high school, says returning to RIC as an adult learner has been enlightening in many ways. Sometimes, fellow students mistook him for being the professor.

"Initially, it was daunting, and I was worried because I'm older than most of the students' parents and older than some of my professors, too," he says. "Ultimately, I was surprised to strike up friendships with many of the students, some of whom I shared the same major. At the end of the day, we're all human beings."

Fellow students helped Shaw navigate through technological problems with remote learning during the pandemic and through what he calls his most challenging class: statistics.

"I'm older now. The technology has changed drastically since the last time I was in college. And when you put distance learning on top of that, it's even more difficult," says Shaw, who has a 3.2 grade point average. "As for statistics, I'm horrible at it. Before COVID-19 arrived, I was receiving help from both students and professors. However, things got tougher when we had to conference using Zoom, a technology I had never used before."

On the other hand, Shaw says he served as a resource for his younger colleagues at RIC.

"In a history of multimedia course, the discussion turned to vinyl and cassettes," he explained. "My classmates were asking, 'What's a cassette?' Well, I had cassettes. What was being called history was actually my childhood."

While taking his classes, Shaw credited a service dog for helping him navigate anxiety, depression and obsessive-compulsive disorder issues. Shaw received the dog from K-9 Companions for Independence, a company that matches service dogs with disabled clients. ​

"My issue is for every class I must sit in the same seat, and I can't sit with people behind me," Shaw says. "My service dog, Smit (a yellow lab golden mix), is trained to stand in front of me and behind me so people won't get too close. He's a phenomenal calming force and makes leaving my house much easier for me."

Shaw says he chose to major in environmental studies because he wants to leave the world's habitat in a better condition.

"As a hunter and fisherman, I've always enjoyed the outdoors," he says. "I didn't realize how much harm has been done to the environment, until I actually studied it. We can fix what's left of the environment from getting worse, but we must work together by stopping deforestation and polluting."

Shaw hasn't reviewed his options for a career in the environmental field yet but figures a role in the Environmental Protection Agency would be ideal.

"I want to be out in the field doing soil samples and water testing," he says.

For now, with graduation within his grasp, Shaw says he's proud to serve as a role model for his 10-year-old daughter.

"The best part of graduation is that my daughter gets to see me walk across the stage," Shaw says. "By doing so, this shows her that no matter how long it takes, eventually anyone can fulfill their goal."

Shaw received his bachelor's degree in environmental studies in 2021