From Liberia’s Civil War to the Frontlines of Poverty in RI: Weayonnoh Nelson-Davies Elevates Her Voice 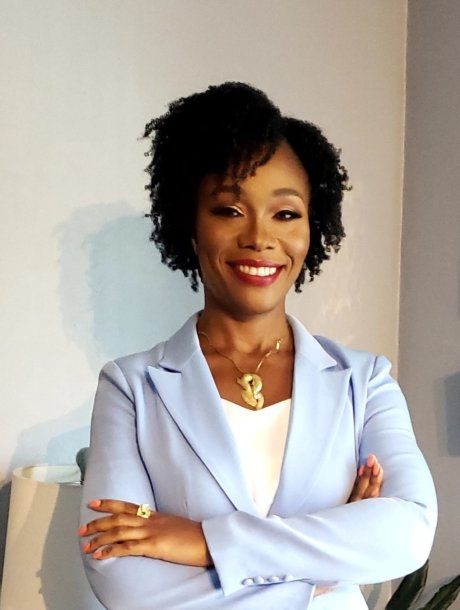 At the age of 12, Weayonnoh Nelson-Davies already knew what it meant to speak up and be heard.

At the age of 10, Weayonnoh Nelson-Davies ’02 was in the middle of a civil war in her homeland of Liberia. By 12, she already knew what it meant to speak up and be heard. Earlier this year, she became the new executive director of the Economic Progress Institute (EPI), where she will use that voice to advocate for Rhode Islanders in need

“As a child one of my first experiences was going around Monrovia [the capital city of Liberia] telling child-soldiers to come back to school with us. During that time, I realized that I had this very deep voice (for a little girl) and it sort of made people stop and listen,” she recalls. “I looked up to Nelson Mandela at that time, and he was a lawyer, so I thought, ‘That is who I want to be.’ I wanted to be that person who would stand up without fear and speak up against injustice. That is where my passion for social justice started.”

Nelson-Davies immigrated to the United States in 1996 and finished her senior year at Mount Pleasant High School in Providence. At the time of her arrival, she had Temporary Protected Status, which meant that as an immigrant she was not eligible for financial aid. “I had no way to pay for college. So I joined an AmeriCorps program, City Year Rhode Island, between high school and college. I wanted to serve my community as a young person and was really committed to that mission,” she explains. “I created a plan on how to get through college with the goal of going to law school.”

In 2002, she graduated from Rhode Island College with a bachelor’s in psychology and a minor in communications. Soon after, she received a full scholarship to Roger Williams University School of Law. That directed her to become a legal aid attorney in Massachusetts for 14 years, representing people who could not afford a lawyer, and led a medical-legal partnership working with medical providers on the health outcomes of patients.

“I worked with low-income families one-on-one, advocating on their behalf,” she says. “I started looking at why there is poverty in the United States and the root causes of it.”

This experience helped her move up to executive director of the Economic Progress Institute (formerly the Poverty Institute, founded by Linda Katz and the late Nancy Gewirtz in 1999), a research center and policy advocacy organization. EPI educates the community and policy makers about the cost of living and how it changes, and also provides information on eligibility for Medicaid, food allowances, disparities in housing and other economic justice issues.

“There are a lot of dots to connect when it comes to poverty. There are policies that create certain conditions and environments, and those conditions and environments create poverty. So I wanted to do more, getting to the root causes and trying to hit it where it starts,” she says. “That’s what led me to EPI. I’ve done direct service work with low income families; now I want to tackle policy advocacy.”

In addition to research and education, Nelson-Davies and her team advocate at the State House to better the lives of people who are in need – regardless of their race, ethnicity, immigration status or gender – and are dedicated to improving the economic well-being of low-income and modest-income Rhode Islanders.

“We collect data to show what the reality is, to share the true story of what life looks like for different groups of families or individuals in Rhode Island,” she notes.

Some of what EPI is working on include having more community conversations, creating focus groups with indigenous and Native people within Rhode Island, and working along with State Rep. Liana Cassar (D - District 66) to introduce an “Equity Impact Statement” bill, expected to help address issues of racial, gender and disability disparities and the silencing of historically marginalized groups.

“We need to speak to community members to find out what they are going through,” she concludes. “Let’s develop policies that remove barriers and will help create an environment where we all can thrive.”