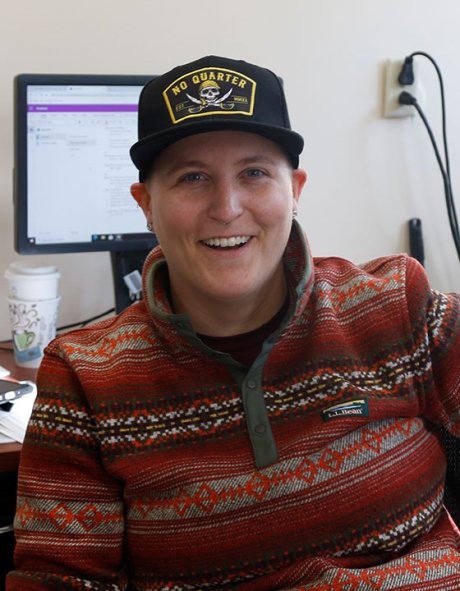 Headquartered in the Military Resource Center, Shaw acts as a peer-to-peer mentor, helping veterans adjust from military life to college life and navigate higher education. She also connects them to federal, state and local veteran’s benefits and works with Lisa Levasseur, interim assistant director of the center, to provide Green Zone training (workshops that prepare faculty, staff and students to better understand the experience of veterans, service members and their families).

“As soon as I met April in the summer of 2021, I knew right away I wanted to offer her a job working in the Military Resource Center,” says Levasseur. “April has a magnetic, outgoing personality, and she really cares about people. She’s also extremely motivated and willing to do the work it takes to make positive changes in the life of student veterans.”

Shaw is a transfer student from Georgia Southern University. She retired from the United States Coast Guard in September 2021 after having served as a shipboard engineer and firefighter aboard Coast Guard Cutter William Tate and Coast Guard Cutter Eagle. Shaw also served as a small boat engineer, engineer of the watch, maritime law enforcement officer, tactical boat crew member and she played a key role in maritime search and rescue operations in Narraganset Bay while stationed at Coast Guard Station Castle Hill.

“When I retired last year due to injuries, I had been in the service for 11 years,” Shaw says. “It was a way of life for me. When I became a student and a civilian again after more than a decade, it was very difficult for me to acclimate. I’m still learning how to be a civilian and function in a world that is not really familiar to me anymore.”

Shaw also struggles with PTSD and anxiety disorders. Part of her job as VetCorps navigator is to make sure RIC student veterans are aware of the services offered through RIC’s Office of Disability Services.

“Nine times out of 10, a veteran won’t walk into that office on their own because they don’t want to take services away from someone else. I let them know that these services are for all of us,” she says.

Shaw also connects student veterans to other disability services in the state and shows them how to apply for VA health care and sign up for VA benefits. Most of all, she urges them to become regulars at the Military Resource Center.

“We’re a community of veterans who care about each other,” she says. “When I started coming to the center last semester, none of us knew each other. Now, most of us are the greatest of friends. This is a place to build friendships. It’s a place to be a part of the veteran community. As military members, we’re taught that we’re part of a team, that we’re part of the military family. It’s important that you know your family is still here, your community is still here. And we want to help.”

RI VetCorps is a program sponsored by the Rhode Island Office of Veterans Services in partnership with AmeriCorps. April Shaw is a sophomore majoring in medical imaging.