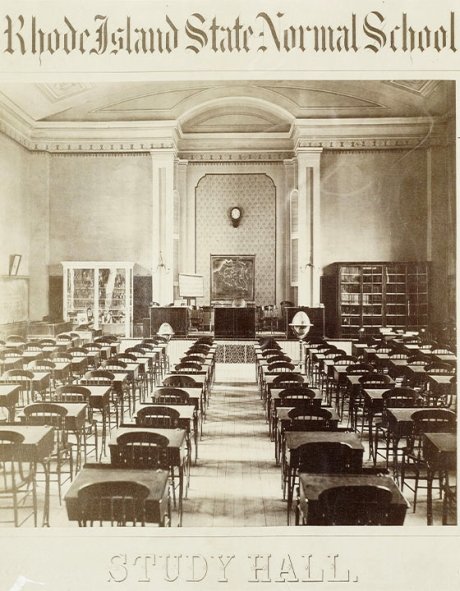 When did the first person of color graduate from Rhode Island College? This deceptively simple question set me on a slow motion roller coaster search through the college’s archives and special collections.

Along the way, there were many dead ends, several mysteries, some surprises and, at last, a plausible answer. In outlining my quest, I share with you one of the lesser-known stories of the college’s 150-year history.

In last summer’s special Sesquicentennial edition of What’s News I identified two very early African American graduates. Rose Butler Browne, for whom Browne Residence Hall is named, was born in Boston in 1897 and received her certificate from the Normal School in 1919. (Click here for full article on Browne.)

Recent research has indicated that Josephine Silone Yates, another outstanding educator, predated Dr. Browne by 40 years. Originally from New York, she had been sent to live with an aunt in Newport where she became not only the first graduate of color at Rogers High School but also the valedictorian of her class.

In 1879, 14 years after the end of the Civil War, she received her certificate, with honors, from the Rhode Island State Normal School. Afterward she traveled west to Lincoln Institute in Jefferson, Missouri, where, as its first female professor, she taught chemistry and later served as chair of its natural science department.

She earned respect as one of the best teachers in the state. During the late 19th century, when African American women’s groups were routinely excluded from national women’s clubs, she gained fame as a cofounder and leader of the National Association of Colored Women, an umbrella organization for state and local clubs that strove to achieve social and educational reform and to end racial and gender discrimination.

An activist in the movement to “educate and uplift” the Negro race, she became famous as a writer and speaker. Two biographical sources proclaim that Josephine Silone Yates was probably this school’s first graduate of color.

But were they correct? An Internet search under her name brought professional achievements to light, but revealed nothing about her life at the school. Was she a pioneer in breaking barriers of race or had she enrolled here because there were no barriers? Whose footsteps might she have followed, and how could I find out?

Nothing in the founding documents or recruitment literature of the Normal School indicates that race was ever a factor of enrollment. Early student registers record the names, gender and ages of applicants, their home towns and the names of their fathers, but make no references to race or ethnicity.

Treasure troves of detailed Rhode Island College history, such as Thomas W. Bicknell’s “History of the Rhode Island Normal School, 1871-1911” (1911) and the “Memoir of Dana Pond Colburn, First Principal of the R.I. State Normal School” (1862), are bereft of race-related data.

Photographs of early graduates are rare and yearbooks, as we know them, did not appear until 1926. The names of graduates and their home cities or towns, published cumulatively from 1854 to 1860 and annually from 1872 through 1938 in the school catalogs, provide clues to ethnicity. More importantly, they allow us to verify information about graduates and their tenure here.

With the Normal School Catalog for 1879 I was able to confirm that Josephine A. Silone of Newport, Rhode Island, graduated in June of that year. A later listing provided an address in Kansas City and the name of her husband, William W. Yates.

Returning to the Internet I hunted for the names of other early graduates by combining terms that would incorporate race (COLORED, OF COLOR, NEGRO, AFRICAN AMERICAN, etc.), the NORMAL SCHOOL, and RHODE ISLAND.

Along with many false leads this process yielded the name of Fanny Jackson-Coppin, the first female principal of the Institute for Colored Youth in Philadelphia (later known as Cheney State College), a popular speaker, writer and activist for women’s rights, founder of the Women’s Exchange and Girls Home for students and female workers, civic leader and overseas missionary. Her graduation from the Normal School was in 1860.

Born into slavery in 1837, Frances Jackson was 12 years old when an aunt purchased her freedom for $125 and sent her north to live with relatives, first in New Bedford and later in Newport. Employed as a domestic, she attended public school for a short time and used her salary to pay for a private tutor and piano lessons. With the encouragement of her employers, her desire to be educated and to teach others led her to the Normal School which was then located in Bristol.

After completing the program she enrolled at Oberlin College, the first four-year college in the United States to admit women and one of the first to accept students of all races. As the Civil War was being fought, she completed her studies with distinction and helped earn her way by providing piano lessons to the children of faculty.

At night she taught freed blacks in an adult education program that she started. She received her bachelors degree in 1865, making her one of the first American women of African descent to graduate from college. In her 37-year career at the Institute, Fanny Jackson-Coppin trained many future leaders and introduced a normal school program. Somewhat earlier than Booker T. Washington at Tuskegee Institute, she also became a strong advocate for vocational training as well as academic preparation.

The Rhode Island General Assembly had established the Normal School in 1854. Could there have been another student of color who had enrolled before Jackson’s arrival in 1860? According to its Records, 1854-1863, the Rhode Island Normal School opened its doors on Monday, May 29, 1854.

The first three days were devoted to the examination of candidates by the instructors. These written and oral exercises were intended to “test the intellectual ability of the candidates, their general fitness for the Normal School course and their knowledge of the Common School studies, viz: – Reading, Spelling, Grammar, Geography, Mental Arithmetic and Written Arithmetic.”

In the written portion, 10 questions were asked on each subject except reading, and five points were given for each correct answer. The oral exam tested their skills “in recitation and explanation and their quickness of perception, as well as their acquaintance with the various school studies.”

In general, those who ranked low on the written part performed well during the oral portion and “gave such satisfactory evidence of proficiency and intellectual ability” that they were admitted without hesitation. In total, 23 applicants were accepted for the first term. The examining committee concluded, however, that the two remaining applicants, “both colored persons,” were “manifestly in need of further preparation.” Acting on the advice of these instructors, Mary L. Offee and Clementine Tweedy withdrew their applications.

In the written exam, Tweedy scored half as much as the highest test taker and 21 points higher than the lowest; Offee scored nine points below the lowest. Knowing nothing about the educational backgrounds of Offee and Tweedy makes it impossible to judge the accuracy or fairness of their evaluation.

We can only speculate on whether or not these written and oral tests were fair in nature or objective in delivery, and whether their results were indicative of intelligence or the ability to achieve success as a teacher.

Details in the records reveal that students entered the Normal School at different levels of maturity, some at the minimum age of 15 and others well in their 20s. Most were single, but a few were married. Several were experienced teachers when they arrived; others dropped their course work when they were offered positions as teachers. In any case, the records say nothing further about Mary Offee.

Clementine Tweedy, on the other hand, reappears in the 1857 register of attendance, and we learn that she came from the city of Providence. The Catalog of 1860 lists her name among the graduates.

On Sept. 11, 1854, the start of the second term of that initial year, it was recorded that “Miss Mary E. Watson, a colored girl from Newport, was examined, and though very deficient, was on account of some peculiar circumstances, allowed to enter on trial, leaving the question as to her final admission or rejection to be determined by her success as a student.”

Could these peculiar circumstances have been addressed in the required letter of recommendation? Did she have the support of an influential person, perhaps an employer? Was she from one of the prominent Newport families and therefore someone to be reckoned with? A later entry commented, “Miss Watson, who was conditionally admitted to the school, made such manifest improvement as to fully entitle her to the privileges of membership.” Towards the end of the term the recorder made this observation:

“It is worthy of notice, as indicating to some extent the liability to error in judging of the scholarship of individuals by the results of a written examination, that several of those who are marked very low in the table of results, have been among the best and most promising members of the school.”

Watson completed her course work in either 1855 or 1856. Hired to teach by the American Missionary Association, she traveled to Norfolk, Virginia. There, as part of a pioneering band of college educated Black women, she dedicated her efforts toward the education, elevation and improvement of the status of escaped slaves and freedmen.

Although there is a slight possibility that someone else graduated before or with her, it is my conclusion that Rhode Island College’s first graduate of color was Mary E. Watson, a member of the 1854 entering class of the Rhode Island Normal School.

This investigation introduced me to some truly phenomenal women. I was awed by the caliber of these early graduates and proud that so early on, this institution had opened its doors to all.

(Marlene Lopes is professor emerita of Adams Library Special Collections. This article was first published in Whatʼs News on Feb. 16, 2004.)