RIC Alum is a Patent Attorney, But Remains a Scientist at Heart

"I love Rhode Island College. There's not many schools like it," says Richmond. "The big universities tend to focus a lot on faculty research and getting articles published. Oftentimes teaching becomes secondary. At Rhode Island College I received personal, individualized attention that you just don't get at a large university."

Entrusted with protecting the inventions of gifted scientists, patent attorney Meaghan Richmond '98 believes she has the best job in the world.

A chemistry major and one of many successful alumni to graduate from Rhode Island College's Department of Physical Sciences, Richmond landed a job as patent attorney for AstraZeneca nine years ago, one of the top 10 pharmaceutical companies in the world and one that is leading the effort in creating a COVID-19 vaccine.

"I've been extremely fortunate, but I wouldn't be where I am today if it hadn't been for Rhode Island College," says Richmond, who pursued an advanced degree in chemistry following the urgings of her professor.

"My professor sat me down in my sophomore year and asked me what I wanted to do with my degree. I hadn't thought about it. She encouraged me to apply to grad school. So I applied to a number of schools and got accepted to all of them," Richmond says. "I chose Brown University because it was local."

Richmond earned her Ph.D. in chemistry at Brown in 2004, went on to work for patent law firms from 2004 to 2011, earned a law degree in 2009 at Suffolk University Law School and landed her current position as patent attorney for AstraZeneca in 2011.

"I didn't set out to become a patent attorney, but once I was on the job, I fell in love with it," she says. "You start out initially not knowing anything about the law and how it works. You enter as an apprentice and learn on the job how to formulate a patent application. The law firm also paid for me to attend law school in the evening."

After working at several private firms in Boston, Richmond relocated to Gaithersburg, Maryland, to work for AstraZeneca, a British-Swedish company with an office in Maryland. There she obtains exclusive intellectual rights to the new drugs the company's scientists develop. It is the scientists who are her "clients," she says, even though they work for the company.

"They are the ones who come up with the inventions," she explains, "so, we work with them in writing the patents. Right at the start, a team is formed around their project and we follow its progress. Once the project is completed, we work directly with the scientist to write a patent application." 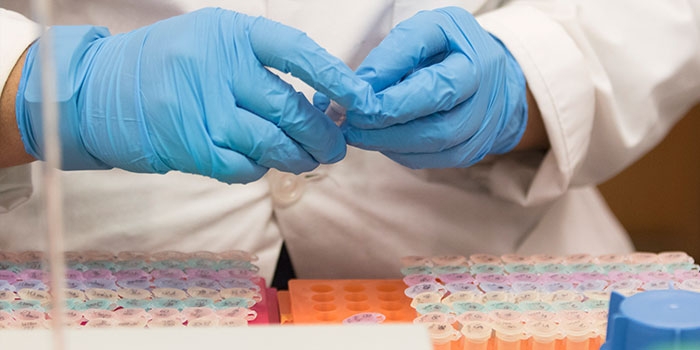 Approximately 30 patent attorneys work for AstraZeneca. Most have master's or Ph.D.'s in biology or chemistry. "You really need to have the technical expertise and a thorough understanding of science to do this kind of work," Richmond says.

At Brown, Richmond received plenty of experience as a research scientist in the lab, working every day and sometimes on weekends from 8 a.m. to 6 p.m. In exchange for research and teaching, she was awarded free tuition and a stipend. At Brown she also learned to write a grant for her research and how to defend it. "It was all training for the patent industry," she says, in retrospect.

Drafting a patent is similar to writing an article for a scientific journal, she says. "You're basically explaining how an invention works, what the results were, what materials were used and the methods used – everything that goes into a scientific journal."

Once a patent application is completed, it needs to be filed not only in the United States but globally. Richmond works with patent offices all over the world to get AstraZeneca's patents approved. It involves a lot of persuasive arguing to convince them that the invention is sound, she says.

Looking back over the past 22 years since she left Rhode Island College, Richmond underscores the strong foundation the Department of Physical Sciences laid for her life's work.

"I love Rhode Island College. There's not many schools like it," she says. "The big universities tend to focus a lot on faculty research and getting articles published. Oftentimes teaching becomes secondary. At Rhode Island College I received personal, individualized attention that you just don't get at a large university. The faculty are great. You could tell they really cared about teaching. I really flourished there."

Richmond also remains a scientist at heart. "I love science. Working so closely with scientists to help them succeed and seeing the cutting-edge science they do every day is tremendously exciting," she says. "I don't have any desire to return to the lab. It's enough for me to know that the work I do supports scientists whose sole function is to research and develop new drugs that heal people. I can't tell you how proud I am."