Papi’s Coquito, an alcoholic drink, was recreated to bring a tropical touch to the people of Rhode Island.

Luis Olmo ’15 and Travis Escobar ’13, along with their business partner Victor Regino, are co-owners of Papi’s Refrescos, the first liquor company in the Ocean State owned by millenial Latinos.

Papi’s Refrescos aims to reflect the lifestyles and cultures of a diverse Latinx community through a variety of traditional beverages, beginning with their first brand, Papi’s Coquito, a coconut-based alcoholic drink.

Coquito (little coconut) is a drink that has been part of the history of Puerto Rican culture for centuries. Regino learned the recipe from his devoted grandmother Juana Sanchez, who always made her famous Coquito to bring together loved ones on special occasions. Olmo, a friend of the family, encouraged Regino to start commercializing the drink. Now it has been recreated to bring the taste of the island with a tropical touch to the people of Rhode Island. 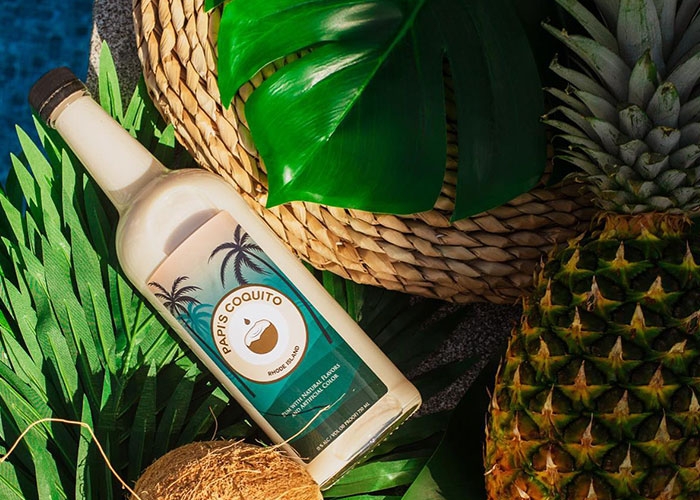 In fall 2020, the founders asked Escobar to join the company. A two-time student body president at RIC, who earned a degree in political science and public administration, Escobar has carved out a multifaceted career over the last nine years, ranging from nonprofit leadership to corporate work. He is manager of community relations at Fidelity Investments and co-founder and president of Millennial RI, an organization created to encourage young people to stay in Rhode Island and that builds a diverse networking environment for them.

“Ever since we announced our brand, Travis wanted to be a part of the business,” says Olmo, who met Escobar at RIC and saw his work ethic, leadership and public relations skills as an added value for the company. “Victor and I saw how successful Travis’ nonprofit Millennial RI was, so we asked him to be a part of this. He brings operational experience when it comes to business.”

Olmo, who holds a B.S. degree in accounting from RIC, worked as a tax associate for LGC&D LLP and KLR, both regional CPA firms headquartered in Providence. He is also treasurer of Millennial RI and an accountant at the CVS corporate office.

Since the launch of Papi’s Coquito last April, the brand is now being sold in over 50 liquor stores, restaurants and bars in Rhode Island, and shows promise not just as a product but as a way to celebrate Latinx people in the United States and to help decrease the gaps in an industry in which Latinx representation is not strong.

Escobar says that although it took a while to get Papi’s Coquito to the market, he sees a bright future for the company and is looking forward to adding more brands inspired by the Latinx community.

“We haven’t done a full year with Papi’s Coquito yet and we’re already working on a new product that we’re trying to get out some time in 2023,” Olmo says, adding, “we have a product that is great and we just want people to try it.”