For Sherly Torres ’21, who struggles with ADHD, art has been a refuge.

We know that art feeds the soul, but it can also turn down the volume on competing thoughts in the mind of RIC alumnus Sherly Torres, an art major.

“I tend to overthink,” she says. “When I overthink, it fragments my mind and my memories, and that affects my mood, my emotions and my whole personality. I can’t stop overthinking. It’s hard. Outwardly I’m sitting still, but inwardly my thoughts are going a mile a minute. Artmaking calms me down.”

Torres suffers from ADHD but hasn’t been clinically treated for it. “Mental health issues are culturally not something we talk about in my family,” she says.

Originally from Puerto Rico, Torres moved to Rhode Island to live with her mother at age nine. “Coming here was a culture shock,” she says. “I felt like a fish out of water. I couldn’t speak any English, but I understood visual language. I’m also a visual learner.” For Torres, the expressive communication of art circumvented the limitations of language. “Art was liberating,” she says.

She took art classes at the AfterZone, an afterschool program. And then at age 14, she got involved in New Urban Arts, an afterschool arts studio for high school students. 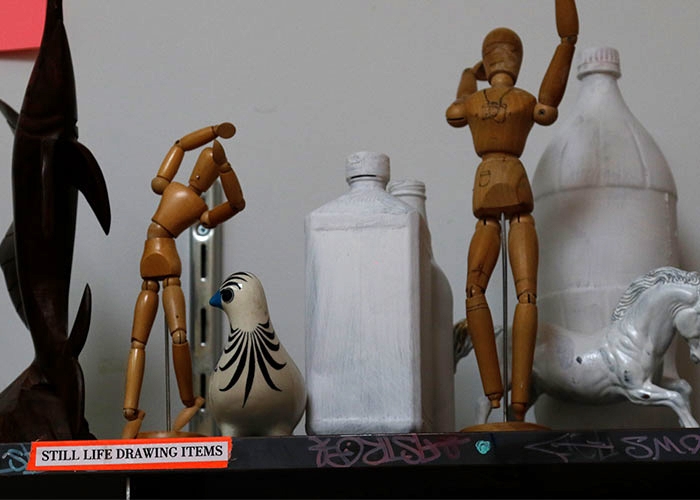 Not only did Torres feel a sense of personal identity, she embraced the freedom to create art in anyway she chose. “Academic environments are very controlled, but it’s not that way at New Urban Arts,” she says. “If you want to start a project and then work on something else, it’s okay. If you don’t want to do anything at all, that’s okay, too. If you just want to sit and have a conversation with the staff, you can do that, as well.” 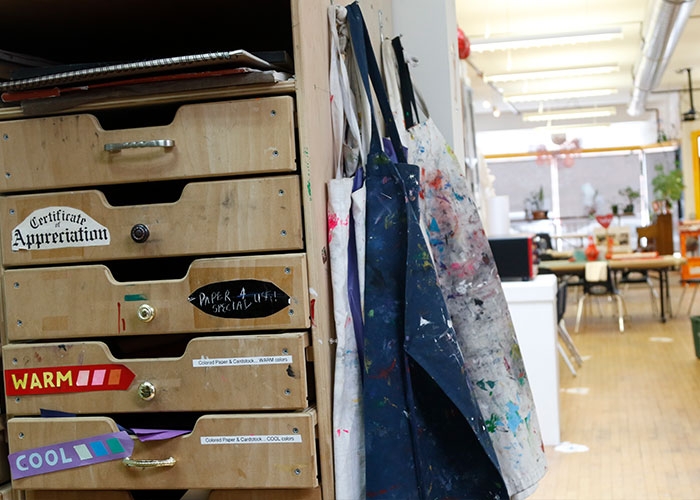 Torres was mentored by a graduate of RIC’s art program, Kedrin Frias ’04. She learned perspective and other art techniques from him and ended up enrolling in RIC’s art program. Like her mentor, she concentrated in painting.

By her third year at RIC, artmaking, which had once quieted her mind, now filled her with anxiety.

“The first two years of college was all art foundations courses,” she says. “But in the third year, you start working on your B.F.A. project. You’re making art for yourself at that point, so it boiled down to what you wanted to make.” 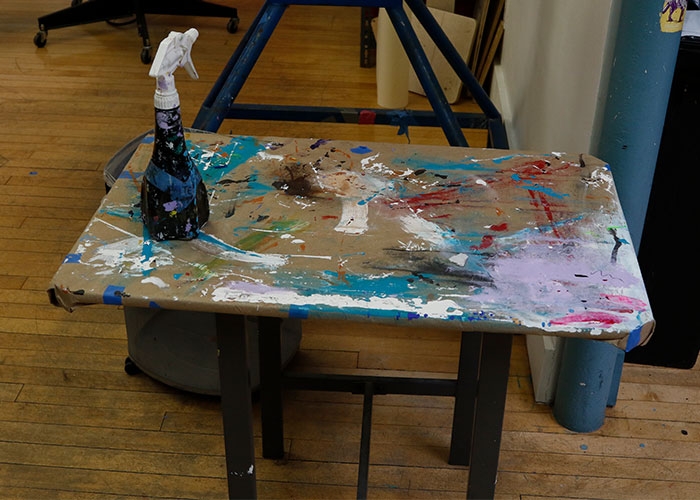 Her final project ended up being paintings of random shapes. “The reason why I chose shapes was to understand what the heck was going on in my mind,” she says. Random shapes helped simplify her world. They narrowed things down and calmed her overthinking mind. “I was both trying to simplify my thoughts and emotions and trying to control them, a mental practice I didn’t understand fully until after college,” she says.

After graduating in 2021, Torres shelved painting and applied to New Urban Arts to work as a painting and drawing studio assistant, which involves mentoring.

“When I was hired, it felt like coming home,” she says. “We have about 30 to 50 students coming in every day. Before COVID we had 80 to 100 students coming in. I love sharing the knowledge I’ve learned. I love seeing their progress. I’m learning from them as well. They’re a different generation and they have things to teach me. Some of them want to go to art school and/or enhance their skills in artmaking. I see the yearning for learning in them, like it was in me. And others just want a safe place to hang out and do art.”

Torres intends to artistically explore the psychology of ADHD and its role in her past, present and future. She’d also like to examine it from a cultural context. Art was her liberation. She hopes to let it be that again.

New Urban Arts is working on a grant to employ a social worker for the students, a much-needed resource in youth development. In addition to her job at New Urban Arts, Sherly Torres is an on-call art educator for the RISD Museum, providing guided tours for middle and high school students, and a part-time sales associate for The RISD Store.