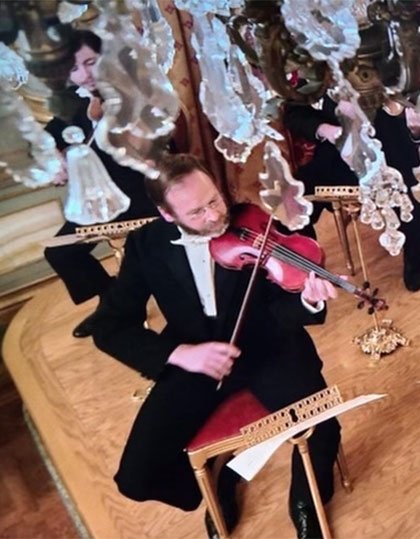 RIC Professor of Music Samuel Breene (pictured) and two of his former students got a taste of high society as orchestra players in the HBO series "The Gilded Age."

Ben Franzblau ‘15 could get used to all the attention that staffers paid to him on and off the set of the new hit HBO show, “The Gilded Age.” In his words, it was “addictive.”

“When you put the costume on, especially in hair and makeup, people pay so much special attention to you,” Franzblau says. “By the end of the third day, I was starting to feel a little gilded.”

For a week last March, RIC music professor Samuel Breene along with Franzblau and Joe Bentley ‘10, two of Breene’s former students, filmed scenes as ballroom orchestra members in the final episode of the first season of “The Gilded Age.” The show traces the lives of two families during New York City’s period of booming economic growth between 1870 and 1900.

Due to confidentiality agreements, the trio couldn’t speak about the “Let the Tournament Begin” episode, filmed at Newport’s Breakers mansion, until after its airing on March 21. Franzblau, a crooked valve horn player and the son of RIC Professor of Music Robert Franzblau, called it the chance of a lifetime.

“Anthony De Luca, a colleague who plays in the Ocean State Pops Orchestra, texted me out of the blue to ask if I’d be interested in a gig for HBO,” Franzblau recalls. “I told him ‘Yes, sign me up right away.’’’

De Luca was also instrumental in arranging for Breene and Bentley to appear in the show’s 12-person ballroom orchestra.

Breene, a RIC professor since 2009, says he was called into the project initially to offer historical context regarding orchestra instruments.

“The show’s directors and producers wanted to make sure the string instruments were appropriate, that the bows were appropriate, for that period in time,” Breene says. “Then during that process, I was asked to be an extra in the show.” 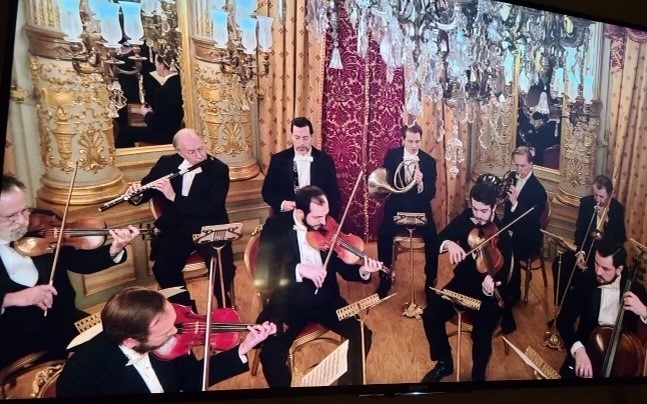 Showrunners asked the trio to refrain from cutting their hair for months before filming began. That was more of a problem for Breene, whose students were puzzled about his sudden hairier appearance, and no problem for Franzblau, who says he hadn’t cut his flowing blond locks since fifth grade. However, he was in for a rude awakening after arriving on set.

“This woman was going through a binder of people with this combed back slick hair and I thought, ‘Oh God, they’re going to make me cut my hair!’’’ he says. “I was sweating bullets because I haven’t had my hair cut in forever. However, after the first snip, the cut was amazing. It looked like a million dollars.’’

For Bentley, the costumes didn’t make him feel like a million dollars.

“For most of us, these were some of the tightest fitting tuxes we’ve ever worn,” Bentley says. “They were tight and very uncomfortable.”

Bentley adds that he was out of sorts about not actually performing during the orchestra scene. Although he’s a seasoned upright double bass player, orchestra cast members were asked to mimic playing their instruments.

“We had flesh-colored earpieces that were playing a track in our ears, and we had to make gestures to appear as if we were actually playing,” he explains. “That’s kind of tough to do if you’re playing a string instrument because you run the risk of drawing a bow across a string, which creates sound.”

Bentley, a freelance musician who teaches at the University of Rhode Island, says he’ll never run the risk of being mistaken for an actor.

“What I’ve realized through this experience is that it is a lot of work,’’ he says. “I will stick to the music and let the actors act.”

Meanwhile, Franzblau is chomping at the bit for the possibility that he, Bentley and Breene can reprise their roles in the show’s second season. He said he could barely keep up with all the feedback he received after his appearance.

“My phone was blowing up,” he says. “My brother texted me and said, ‘Dude, you’re all over this episode.’’’