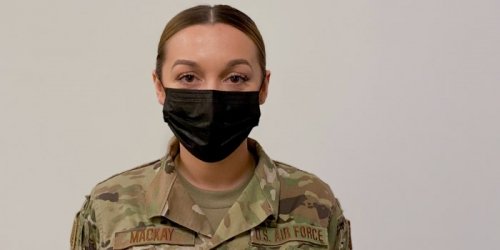 Nicole McKay works behind the scenes to deliver COVID-19 vaccines to the Rhode Island community.

When her father broke his knee, Nicole MacKay took great strides to nurse him back to health.

“Taking care of him inspired me to pursue medicine,” says MacKay, a Rhode Island College biology major and a sergeant in the Rhode Island Air National Guard.

MacKay, 24, is now helping to take care of fellow Rhode Islanders as a non-commissioned officer in charge of storage and handling of the COVID-19 vaccine at the Sockanossett Crossroads site in Cranston. During shifts that can extend to as long as 12 hours daily, MacKay leads a team of 24 military personnel members that works mostly behind the scenes.

“When shipments of the vaccine come in, we’re responsible for storing them at proper temperatures and pre-filing syringes before they’re distributed to vaccination stations,” says MacKay, who also works as an emergency room technician at Rhode Island Hospital. “Most people would never see us because when we push the vaccines out the door, it’s really needles to arms.”

As of mid-March, MacKay and her colleagues had distributed about 30,000 vaccine doses, averaging about 8,500 per week.

After growing up in East Providence, MacKay decided to join the military almost seven years ago to jumpstart a career in medicine.

“I got an EMT license and met amazing people from different walks of life,” she says. “The Air Force is like a family. It’s been supportive of education, encouraging us to do better inside and outside of the military.”

“Personally, I know how much our student veterans are juggling, trying to balance family life, military service and schoolwork,” Levasseur says. “I want every military-affiliated student to know we’re here for them.”

That support emanates from professors as well, whom MacKay says have been understanding when she’s had to drop everything and serve on medical-related military missions.

Shortly before COVID materialized, MacKay and her Air National Guard unit were dispatched to a secluded town in Georgia.

“We provided healthcare to a community that needed it, where there was little access to care and the nearest hospital was miles away,” she says. “We conducted physicals, vision screenings and even dental work. It was a really humbling experience.”

MacKay says the vaccine distribution experience is equally humbling. She’s encouraged by the thousands of people who are opting to be vaccinated.

“We’re giving the community the sense of relief that they need,” she says. “You don’t realize when you’re working all day the difference you’re making. This is history, and the kind of thing that the Air National Guard stands for.”

“Nicole is a superstar in the vaccine handling portion of this mission,” Barrett says. “She’s extremely smart, reliable and pays great attention to detail, which is exactly what I need. She has trained over 25 military members on all three vaccines. She’s also very organized, which helps to keep this mission done in a safe, efficient manner. It’s not an easy job she has, but she makes it look easy.”

After graduating from RIC, MacKay says she intends to apply to medical school to become an emergency room doctor.

“While I’m working as an emergency room technician now, I feel that I’m helping people when they’re at their lowest point,” she says. “And the goal for me is to give back, and always put the patient first.”