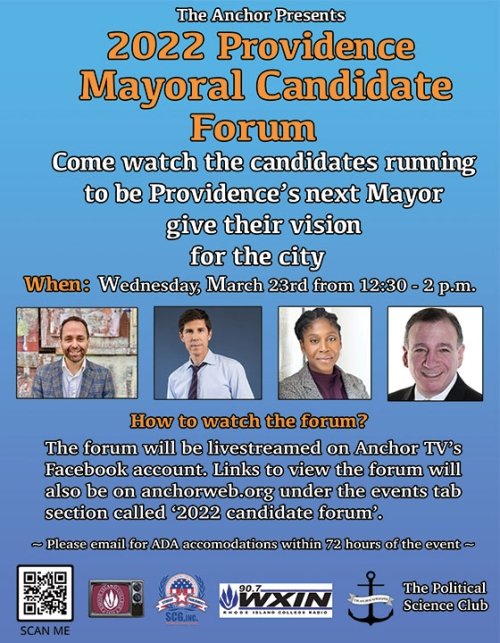 RIC students are working together to promote civic engagement on campus. Students from various clubs and majors are collaborating to host a candidate forum for the Providence Democratic mayoral primary.

“This is an idea I’ve had for about a year now. Last year I wrote an opinion piece for The Anchor about how we need to have things like candidate forums and debates on campus, specifically aimed at 2022 since it’s a big election cycle,” explains Raymond Baccari, a sophomore Media Communications major who had the idea to put together this event.

The event is a collaborative effort by numerous student-run organizations on campus including Student Community Government, The Anchor Newspaper, Anchor TV, 90.7 WXIN, and the Poli Sci Club.

“There’s a lot of people involved, and I want to credit all of them,” says Bacarri. I’m going to be co-moderating this along with the Poli Sci Club’s President Mackenzie Raimond. She’s been awesome.”

The candidates will be asked a mixture of pre-prepared questions and questions submitted by attendees.

“I hope that my fellow students will get a chance to see those who are running to be Providence’s next mayor give their vision for the city and ask them questions about the issues that are concerning them,” shares Bacarri.

Rhode Island College has a large population of students that are Providence residents and half of the college’s campus is in Providence. Bacarri cited this as the reason the team running this event selected the Providence mayoral election as the first of what they hope to be many student forums.

“It mainly boils down to promoting civic engagement and education,” Baccari explains. “We’re showing that this is a student-run and organized event that can set the precedent for RIC to host forums and debates like this is the future.”

While the hope was for this event to occur in-person, due to increases in COVID-19 cases, it will instead be live-streamed on several of the Anchor TV’s social media platforms. Students will be given the opportunity to submit questions ahead of time through a Google Form.