"Black Joy," a Rhode Island PBS documentary series, features RIC students both in front of and behind the camera.

“When I was told about this opportunity to not only perform at my school but to be a part of a program for PBS, it felt surreal,” shares Georgerinna Farley, a Rhode Island College senior majoring in theatre with a concentration in performance.

Farley is talking about “Black Joy,” a Rhode Island PBS documentary series to which she and several other Rhode Island College students were able to contribute. This unique opportunity came from a partnership between RIC and RIPBS. 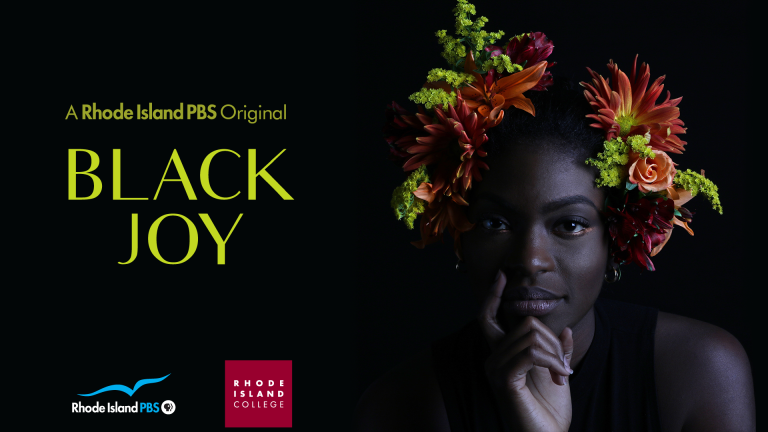 “The relationship between our two organizations actually has a very long history,” explains Lucie Raposo, Director of Public Information at RIPBS. “Rhode Island PBS (then WSBE Channel 36) started on the campus of Rhode Island College in the ‘back’ of Adams Library.”

Students from performing arts and communications backgrounds were able to perform both in front of and behind the cameras on this documentary series. Bill Wilson, theatre professor and assistant chair for the Music, Theatre, and Dance department,  notes, “This partnership gives our students much needed exposure to the Rhode Island arts community at a crucial time in their careers.”

Farley has performed in several theatre productions at RIC and is credited by Wilson as a highly-skilled actress, dancer, and singer. For “Black Joy,” she chose to perform a song. “Being a part of a program that intended to shine a light on Black people and artists was such a blessing,” Farley says.

She adds, “Every artist knows how hard it is to enter the real world after training, and being a Black artist makes it even harder. I am so thankful to the professors that recommended me and to Brianna Medina, the producer, for allowing me to be a part of such an amazing and impactful night.”

Communications students also got their moment to shine through this collaboration. The “Black Joy"  film crew was composed of Melissa Medenciy ’05, RIC's Multimedia Studio manager; Kerri Rubino ‘16, the studio’s specialist; and six communications students. Rubino, who also serves as an adjunct instructor teaching COMM 246 Television Production, saw this collaboration with RIPBS as a perfect opportunity for her students to get hands-on experience. They were even able to work with with technology they typically don’t get to operate as students, like advanced cameras to film in Ultra HD.

“This was the first time my students or I had been able to get our hands on such powerful equipment, so it took hours of preparation and training to learn how to operate these cameras,” shares Rubino.

Rubino reports that learning in such a short amount of time “was a true test of the students’ technical proficiencies and each of them exceeded expectations.”

Aidan Thompson, a junior with a major in Media Communication, was one of those six students to work on “Black Joy.”

“[Working on the series] gave me some basic knowledge on how to work these specific cameras and all the aspects of what goes on during a live filming and production of a show,” Thompson says. “It means a lot to have these opportunities like this during my undergraduate career. I have never gotten an opportunity like this before.”

“Black Joy” will not be the last collaboration between RIPBS and RIC. Raposo expressed that RIPBS is currently considering expanding “Black Joy” and expects there to be other opportunities for RIC students at RIPBS in the future; she emphasized that they also offer an internship program for students.

“Education – in its broadest definition – is also the mission of Rhode Island PBS,” says Raposo. “Some of the most successful and rewarding work we do extends beyond the classroom into real-world experiences.”

“Black Joy” can be watched here.