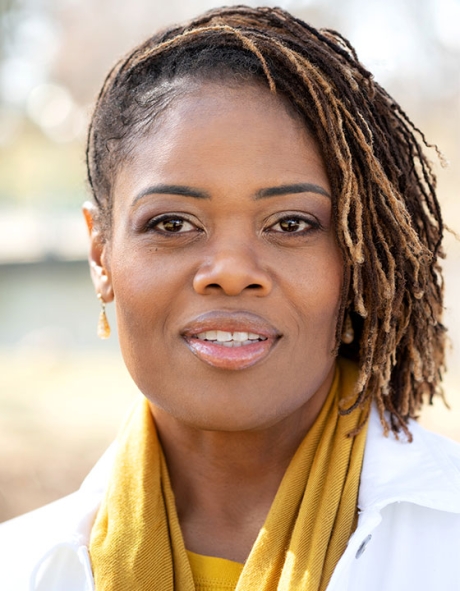 “When a story begins with emphasis on the technical aspects of writing, it kills the story and assassinates the storyteller. I focus on story. Even more, I focus on the culture around storytelling,” says Clarissa Walker, Ph.D., Writing Center interim director.

“I was in love with storytelling long before it became my career,” says Clarissa Walker, Ph.D., interim director of the RIC Writing Center. “It was because of the colorful stories I heard on the front porch of Phoebe’s house, my grandmother’s first cousin.”

“I grew up in Gram’s house in east Augusta, Georgia, which is still affectionately called ‘the Bottom,’ but on Saturdays we took a taxi downtown to Phoebe’s on Eighth Street. Phoebe lived in a shotgun house; this was a popular design in the South from the Civil War to the 1920s. The body of her home, like her neighbors on either side, was narrow and long like the barrel of a shotgun. You could look into the front door, pass the foyer, living room, three bedrooms and the kitchen and have an unobstructed view out the back door.”

“On Saturdays, we sat on Phoebe’s compact porch, fanning ourselves with dated newspapers, speaking to passersby but mostly listening to Phoebe tell stories,” Walker says. “Her stories featured Black people moving through situations that we knew intimately. Fecund, lush with description and, at times, racy, Phoebe’s stories wouldn’t make the 6 o’clock news but they were the repository of our secrets; laughter that squeezed the last bit of air from our lungs, silence or the weighted sadness of a “Naaaaaaaw, Phoebe” were the full stop of the denouement.”

Phoebe remains among a lexicon of Black storytellers whose voices and experiences are reflected in the poetry and fiction of renowned Black writers like Langston Hughes and Toni Morrison, writers who celebrated the unique language and culture of Black people.

However, Black scholars like Walker are concerned that Black vernacular and culture is being suppressed in college classrooms. She calls it “the racialized superiority of academic language.”

“There is this racial bias that comes with a certain way of speaking,” Walker explains. “When Black students don’t align with Standard English, they are viewed as less intelligent. They struggle with the imposter syndrome and racialized inferiority.”

President Obama was noted for it. In a single conversation, he intermixed Standard English with Black linguistic traditions. “But he had the agency or the power to do that,” Walker argues. “He was president of the United States. But if you’re an 18-year-old, Black, college student, struggling with imposter syndrome, your relationship with power is going to be different; you’re going to be treated differently because of the way you speak.”

“One of the beautiful things about Phoebe is that on her porch, this Black woman with an eighth-grade education had all the agency and all the power,” Walker says. “She was a formidable storyteller; the best storyteller I’ve ever encountered.”

How do we nourish storytellers and story spaces that honor the language and culture of Black students? Walker doesn’t claim to have the answers, but she intends to grapple with these questions in her new podcast called “Story Culture Live,” where she will interview special guests on this topic.

“When we examine storytellers like Phoebe,” she says, “and spaces like her front porch and how these triumphs of storytelling occurred, we find that agency was held by storytellers like Phoebe regardless of their education level. If Phoebe can step into her agency on that porch, why can’t our students step into their agency in our classrooms? What kind of constraints are we putting in the classroom that gets in the way of this happening? How do we make the classroom space a grassroots story space like Phoebe’s porch?”

“Writing is a craft, it’s an instrument, but that’s not where stories are born,” Walker says. “If you take the focus off of the writing and put the focus on the story, you empower people.”