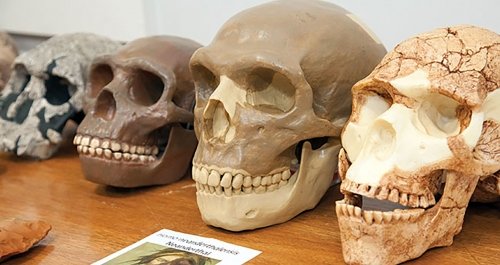 RIC students and preschoolers gain hands-on experience in the subfields of anthropology during World Anthropology Day.

Look! I found something!” cried a little boy, jumping up and down near a bin of dirt. Immediately other preschoolers turned to peer in awe at the “ancient” coin nestled in his tiny palm.

It was Feb. 18, World Anthropology Day at Rhode Island College. Children from RIC’s Cooperative Preschool were on an archaeological dig, one of many activities organized by the Department of Anthropology to celebrate a day set apart by the American Anthropological Association to bring attention to the field of anthropology.

In this outdoor activity, RIC faculty buried wooden beads, plastic coins and modern arrowheads in bins filled with soil, then brought in the children, handed them trowels and allowed them to go on their own dig for remains and artifacts.

Archaeology is a subfield of anthropology that studies past and present human populations through material records, explained Morenon. The other four subfields are biological anthropology, cultural anthropology, linguistic anthropology and applied anthropology. Preschoolers, as well as RIC students, gained hands-on experience in all of the subfields throughout the day.

Inside the department, a display table of fossils and skulls was set up by biological anthropologist Professor Mary Baker to depict how humans evolved. “We still do not know what the earliest pre-humans were,” she noted. “We have many ancestors in the human line, but precisely how we evolved from them is complicated and much contested. Pre-humans didn’t look exactly like us and they also didn’t look exactly like a chimpanzee or a gorilla. If you go back 25 million years ago, there are no chimpanzees or gorillas; there’s something called procounsel – an ape found in Africa that is probably an ancestor to modern chimpanzees and gorillas and also ancestral to us.”

Preschoolers were allowed to handle the skulls, engage in a human fossil word search and color images of fossils and skulls in a coloring book.

At an adjacent table, linguistic anthropologist Professor Gale Goodwin Gomez provided examples of the earliest languages. Using hieroglyphs, children were able to see the connection between a word and a symbol and to get a sense of how hieroglyphs were ways of communicating language using symbols. The children were also given ink stamps of hieroglyphs to play with and to form words.

One of the most populated rooms held a large table, where preschoolers and RIC students were making “muñecas quitapenas” (worry dolls) from Guatemala.

Cultural anthropologist Assistant Professor Peter Little explained that “muñecas quitapenas” are the Guatemalans’ remedy for worrying. A worried person tells his or her troubles to as many dolls as necessary, places them under the pillow and the dolls do the worrying, while the person sleeps peacefully. Cultural anthropology, he said, is the study of modern-day humans through interviews and observations.

Morenon is currently involved in reconstructing an early 3,500 BC site at Quonochontaug Pond in the towns of Charlestown and Westerly, Goodwin Gomez is documenting two endangered languages of the Yanomami family in the Amazon of northern Brazil, Little is researching the human and social impacts of the influx of e-waste in West Africa and Ghana and Baker is studying the medicinal plant use of capuchin monkeys in Costa Rica while working with the park reserve on conservation. Baker is also involving students at the Metropolitan Regional Career and Technical Center in her field study, by calling into their classrooms via cell phone from the field so that they can see the monkeys and ask questions in real time.

“Anthropology is such a big field,” Baker said. “The activities the children were involved in today are not something they will soon forget.”