There was no wind, only an eerie calm. Sea ice floated alongside the 274-foot vessel in 0 degree temperature. On deck, a cadre of research scientists from around the world huddled in parkas in a silent, collective state of awe.

Garrett Walsh ’18 was among them. After graduating from RIC's environmental chemistry program, Walsh had enrolled at Texas A&M University, where he is a graduate student of oceanography. He was one of only 12 students selected to take part in this 40-day expedition from South Africa to the Antarctic to examine the effects of global warming on the ocean.

"The track we were on was the most remote part of the ocean," he says. "If you draw a straight line from Cape Town, South Africa, to the Antarctic there's nothing there. If anything went wrong, we were alone. 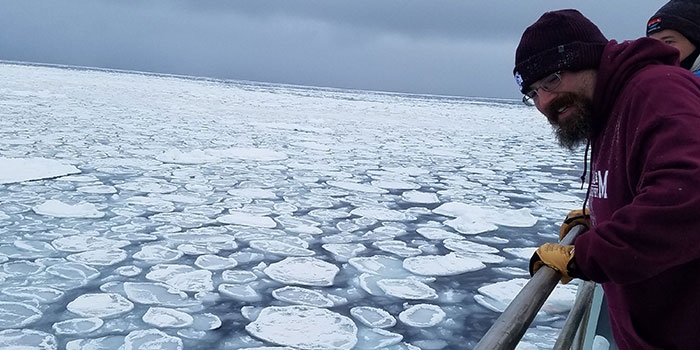 The goal of the researchers was to collect water samples from over 90 stations – not land-based stations but specific areas of longitude and latitude in the ocean about every 50 kilometers.

At each station, an instrument called a Rosette is lowered to the bottom of the ocean and then slowly raised, collecting water from various depths as it is raised. Walsh's job was to gather water samples which would later be checked for concentrations of chlorofluorocarbons or CFCs.

CFCs are gases originally used in the manufacture of aerosol sprays and refrigerants, but are now banned because of their destruction of the ozone layer. CFCs also warm the lower atmosphere of the Earth, changing global climate.

"As destructive as CFCs have been to our planet," Walsh says, "they've also helped scientists better understand the ocean. You see, CFCs don't break down in the water. They travel with a water mass. We can follow that water mass as it travels along the bottom of the ocean and better understand how water masses form. We can also measure how many years it took for the water mass to travel to that point and whether or not the water mass is slowing down or speeding up over time."

Walsh's 12-hour shift began at eight p.m. and ended at eight a.m. "I didn't see daylight for quite some time," he says, "not only because I worked the night shift but because it was storming most of the time we were at sea. Between cloud cover and storms we saw no sunlight for 20 days."

On deck, work was a team effort. A crew member was in charge of raising and lowering the winch (the cable connected to the Rosette), a marine technician made sure nothing went wrong and acted as the go-between for the science party and the crew, while a few scientists observed the lowering of the Rosette, checking for any sign of trouble with the instrument.

"Some days we were hit by 50-foot waves and could do nothing but wait it out," says Walsh. "There's this camaraderie that develops among everyone. During a storm, you're in the mess hall eating and suddenly the boat tilts, causing your chair to slide to the left, so you begin eating from someone else's plate. Then the boat tilts in the other direction and you're eating from your own plate again like nothing happened."

"On calm nights, a bunch of us would lay on the deck looking up at the Milky Way," he says. "At night the stars are completely unblemished." 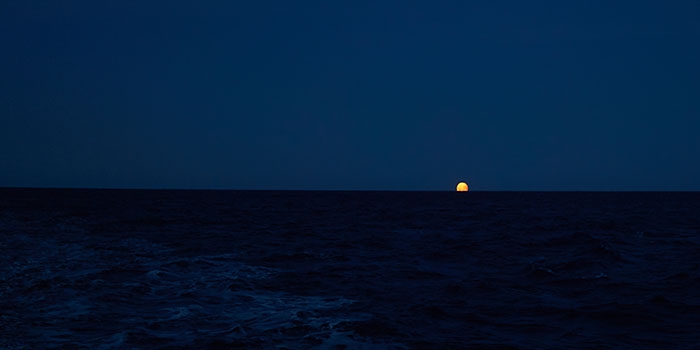 Walsh says, "I owe this once-in-a-lifetime experience to RIC Professor of Physical Sciences Sarah Knowleton. She exposed me to the field of research and oceanography and took me under her wing. For a year and a half we did research work together. She will always be one of the most important influences in my life. I still email her and talk to her and tell her how things are going. I owe her a lot. In fact, I owe a lot to the entire Physical Sciences Department."

When Walsh graduated from "little Rhode Island College" and enrolled at Texas A&M, a tier-one research institution and the first in the United States to offer a graduate degree in oceanography, he never expected to be so far ahead of the other students.

"I would sit in class thinking, 'I know this material already.' That's because you learn so much at Rhode Island College. All of my teachers were fantastic."

The 32-year-old intends to become a teacher himself at the high school or community college level. Currently he is completing his graduate thesis on how compounds similar to CFCs are entering the water in Texas' Galveston Bay, how they're being transported through the bay and if they are ending up in the ocean. His hope is to generate a love of science in young people and lay people and to show them how connected science is to their lives.