Film about Trailblazing Female Composers to Premiere at RIC, Accompanied by Performance

When thinking of great composers, there is no shortage of household names. Mozart, Beethoven, Bach, Tchaikovsky. It is unlikely, however, that many, if any that come to mind are female. Judith Lynn Stillman is remedying that imbalance.

Many at RIC might already know Dr. Stillman, who is a professor of music and RIC’s artist-in-residence. Stillman has been producing prolifically through the pandemic. Her quarantine opera, “Essential Business” which she composed towards the beginning of COVID-19, won first prize in the international OperaVision #OperaHarmony competition, and featured Metropolitan Opera star baritone Will Liverman. The film  was also presented earlier this year at RIC. Most recently, she has dedicated herself to creating a film about talented and inventive yet often forgotten female composers of the past.

Her new, groundbreaking film “Women Trailblazers in Music: Noteworthy Composers” will depict the extraordinary lives of these female composers across a span of twelve centuries and feature their revolutionary compositions. Stillman shares that the incredible ways these women changed music should have earned them recognition and acclaim, but instead, their music has been routinely forgotten when it should be lauded.

Stillman cites her inspiration to create the film as part of her ongoing dedication to giving voices to the voiceless. Previously, she has created projects addressing the Holocaust, the Armenian genocide, refugees, artists of color, and the climate crisis.

While COVID-19 caused difficulties, it also resulted in opportunities for building connections for Stillman. “The pandemic created the necessity for a remote platform, which afforded me the opportunity to work with artists from all over North America. Los Angeles, Montreal, New York City, Chicago, Vancouver, Hartford, in addition to Boston and Providence,” says Stillman. She adds, “I am filled with so much gratitude to all my amazing colleagues who joined forces with me to be a part of this groundbreaking film and help bring the project to fruition.” 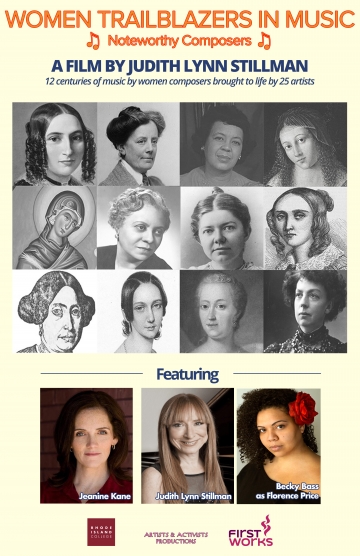 Stillman shares a bit about the first of many composers featured in her film: “It begins in ninth century Constantinople with the Byzantine composer Kassia. She became an abbess, and that ensured the longevity of her music for twelve centuries. Hers was a calculated career choice. Many of her hymns are used in the Orthodox Church liturgy to this day.” She adds, “Women composers had to be quite clever. For example, several of the featured composers married music publishers to secure the survival of their music. Some adopted male pseudonyms. It took a lot of ingenuity.”

She also emphasized the importance of recognizing Florence Price, another composer featured in her film and the first Black woman to have her compositions performed by a major symphony orchestra.

Stillman also has a personal connection with her film. She explains, “[That] my talented mother and grandmother’s musical careers never took off in the male-dominated societies. This propelled me to champion women composers who were repressed, undervalued, discouraged, and forgotten due to the politics of their existence.”

“In Western music history, women were permitted to be the interpreters, but not the creators. They were not encouraged to pursue music professionally. Gender inequality has been rampant throughout the industry.”

The world currently, Stillman notes, is still not close to redressing this historic imbalance, but progress is slowly being made. “The climate for female composers is still problematic as the dominance of male composers remains strong, but the tide is shifting. Slowly. Statistics confirm that only a handful of male composers comprise the majority of all programming. We need to encourage and empower women composers and make a concerted, pun intended, effort to redress the historic imbalance and harness momentum for change. Many have earned a crucial place in Western history and should be household names, but are merely in the process of being fully recognized and celebrated.”

The film will premiere for the public on November 4 at 7:30 p.m. in Sapinsley Hall. The film, presented by FirstWorks and Artists & Activists Productions, will be followed by a live concert featuring the works of several female composers. Admission to see this exciting film is free, but registering for tickets in advance is mandatory because of social distancing and contact tracing protocols. Unregistered guests will not be admitted. Tickets are available here.