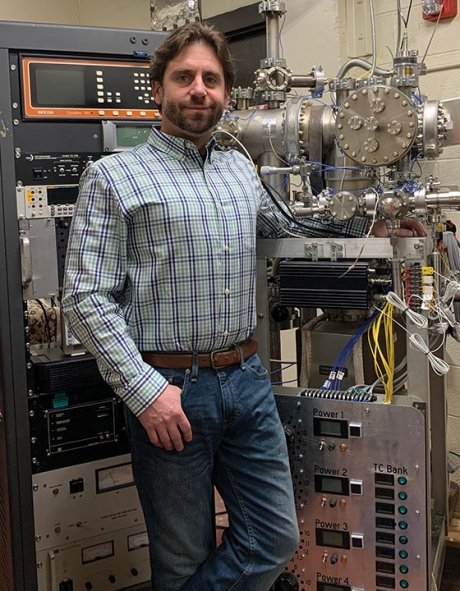 "There are few things more beautiful than the core of a nuclear reactor," says RIC Associate Professor of Physical Sciences Benjamin Young.

The core he's describing is within a research nuclear reactor located at the Rhode Island Nuclear Science Center In Narragansett. Young has access to this facility and to the Department of Energy's (DOE) 17 National Laboratories throughout the country, as well as the Surface Lab he's built in Clarke Science on the RIC campus.

Many undergraduate students don't get lab experience outside of coursework, where experiments have been done thousands of times and don't produce new information. However, Young takes his duties as a mentor seriously. He strives to involve his students in his ongoing projects, both on- and off-campus.

"There are students who aren't strong performers in the classroom who just come to life in the lab," he says. "It's my job to help students decide if they want to work on problems that don't yet have solutions. And that only happens in the lab."

The problems Young likes to work on have evolved over time and are mainly stumbled upon by accident. Even as a child he enjoyed working on problems.

When Young was an undergrad at Slippery Rock University in Pennsylvania, one of his professors deeded him with the keys to the kingdom – the physics storeroom. He didn't have room in his schedule for an internship because he was working full-time while taking 18 credits, but in the storeroom Young was able to "play with all the demo and lab equipment with little idea what any of it was for," he recalls. "I may have learned more there than in the classroom."

His time in the lab continued to grow during graduate school at the University of Rhode Island. That's when he learned there are fantastic national laboratories, 17 of them in fact, where you can do research for free. All you need is a great project.

Currently, he is working on a project funded by the DOE using spectroscopy. He's investigating ultrafast dynamics in photocatalytic and photovoltaic materials.

"It was a brand new project for me," Young says. "I've been having a ball learning both new physics and taking measurements on ultrafast time scales."

This project has an added layer of interdisciplinary collaboration with chemists from the University of Rhode Island. Because of their background, the chemists approach problems from a different perspective, which provides a rich experience for both Young and his student researchers, who take on projects like rebuilding detectors and other experimental capabilities. Other students in Young's classes visit the facility through field trips, even if they're not directly involved in a project. With a resource this good, Young can't help but share the wealth with as many students as possible.

In addition to taking full advantage of outside resources, Young has managed to create opportunities for experimentation on campus, where he built an ultrahigh vacuum chamber in his lab at Clarke Science. There, he's able to concentrate on lithium battery ion research. It might sound wonky, but this field has an everyday impact.

"Do you remember the old advice to drain rechargeable batteries completely before recharging them?" Young asks.

"Lithium ion battery technology solved that problem and has been largely responsible for making hybrid and fully electric vehicles cost competitive – or nearly so – in the market."

If Young is able to fully harness the technology he is currently working on, the amount of energy a battery can store could be increased tenfold. It would also enable the weight of the battery to be reduced tenfold, which could potentially allow an electric vehicle to drive from here to Ohio on one charge. This kind of lithium ion battery research is crucial as other renewable energy sources continue to gain traction.

"Having capable battery technology available when alternative fuel supplies from sun, wind, etc. finally scale up will be critical," he explains. "The DOE project seeks to add more information on the solar photochemistry involved in the fuels part. So, while we're not building widgets to solve these problems, we are building the knowledge that will enable them to work. I hope we can contribute solid information soon enough to matter."

Young's ideal use of his research would be to help reduce the world's reliance on fossil fuels. But for now, he just feels lucky to make a living working on problems that don't yet have solutions.