School of Nursing Takes on a (Simulated) Disaster

When it comes to nursing, “Reading [about] it is one thing and actually doing it is another,” says Dr. Joanne Costello, Professor at the Rhode Island College School of Nursing.

Students got to do much more than read when the School of Nursing ran its first disaster simulation trial in October.

The simulation immersed nursing students in what it would actually be like to respond to a crisis. Students were given little information outside of that they would be in their lounge area at the Rhode Island Nursing Education Center (RINEC) as if class had just ended when a disaster would strike and they would have to respond. Meanwhile, crisis actors were moulaged – having mock injuries applied to them with makeup – while being informed of the full context of the disaster they would be acting out. A protest along the streets of Providence would be derailed by a car driving into the crowd, and the victims of the hypothetical attack would gradually make their way into RINEC for medical aid.

Crucially, it was emphasized to the student nurses participating in the simulation that there was no pressure, the simulation was not graded, and that their personal wellbeing was most important.

The simulation was done in collaboration with the Center for Emergency Preparedness and Response at the Rhode Island Department of Health, with assistance from disaster simulation experts David Balbi and Dawn Lewis. It was also aided by Joe Arsenault, the exercise coordinator for the Rhode Island Emergency Management Administration, who applied the moulage on the actors.

While tabletop exercises, ones that present the concept of a disaster and ask students to suggest what they would do, are beneficial, Costello believes a simulation is the best form of preparation. 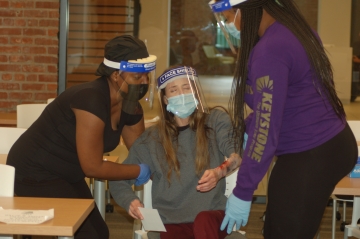 “This is something that we’ve been wanting to do for several years now,” she explains.  “We have these accreditation standards [from] the American Academy of Colleges of Nursing. One of their initiatives is that nurses will display proficiency in planning for and intervening during any kind of disaster. Simulation offers the best way for students to be able to learn, so for about six months now we’ve been working on figuring out what we had for resources, how we could make this happen for our students, and how we could engage people at various levels.”

Both current seniors in RIC’s nursing program and nurses in RIC’s doctor of nursing practice program participated. The reception to the simulation was very positive.

“It’s really beneficial to the students, but it’s also really beneficial to our community,” Costello notes. “Our graduates stay in our state; they become nurses in Rhode Island. If we can provide a strong base of knowledge regarding disaster, we can help to promote the best outcomes possible if and when we do have disasters in the future.” 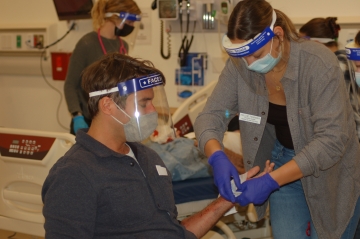 This was the first disaster simulation for the Rhode Island College School of Nursing, but it will not be the last.