Christopher Reddy collects oil leaking from the USS Arizona, which was destroyed during the attack on Pearl Harbor in 1941 in Oahu, Hawaii. (In the background, the USS Arizona Memorial straddles the sunken vessel.)

A senior scientist in the Department of Marine Chemistry and Geochemistry at Woods Hole Oceanographic Institution (WHOI), Rhode Island College alumnus Christopher Reddy was recently honored with the 2018 Ambassador Award by the American Geophysical Union (AGU) for his extraordinary leadership in broadly communicating science outside "the ivory towers."

By winning the Ambassador Award, Reddy was also made an AGU fellow. This prestigious professional society consists of over 62,000 members from 144 countries; however, only a fraction of the membership is elected or conferred as fellows.

In the short film Oil in Our Waters: 50 Years After the Spill, see Reddy at work. 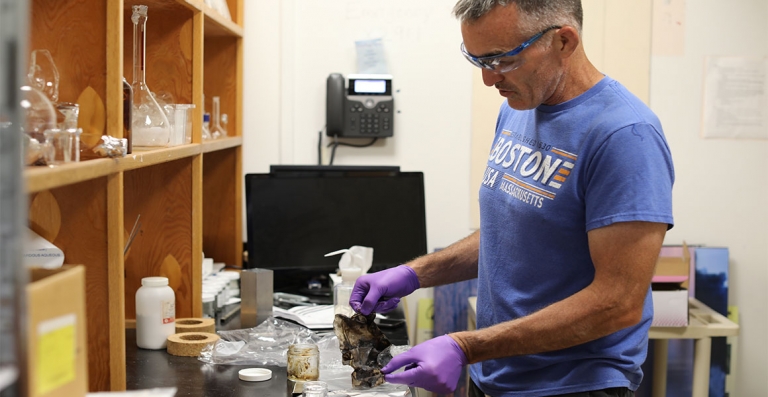 "Chris is so much more than an outstanding scientist," said WHOI President and Director Mark Abbott. "He cares deeply about public understanding of complicated environmental issues and he is dedicated to ensuring that issues are discussed thoughtfully and with complete scientific integrity. He's a great ambassador for ocean science."

According to Reddy's peer, Professor David Valentine of the Marine Science Institute at the University of California-Santa Barbara, "On any given day, Chris could be counseling members of Congress, military admirals, corporate executives, reporters, foreign officials or high school students working on a science fair project." 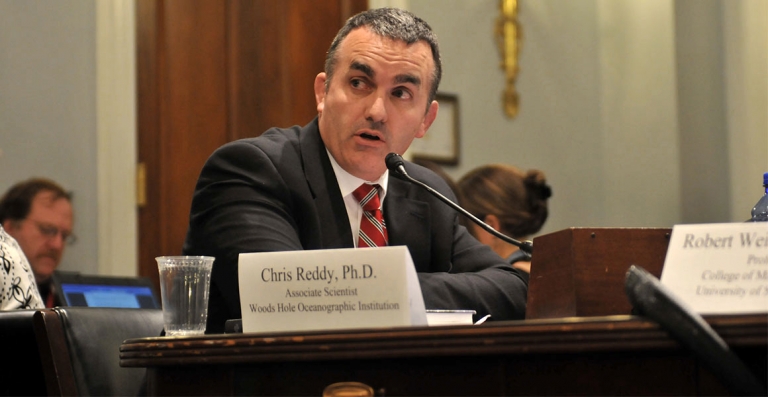 "What makes Chris such an effective ambassador for science," Valentine said, "is that he seeks out those who will benefit from his knowledge." Valentine added that R eddy is one of few scientists who have engendered such a high level of trust among federal response officials, so much so that he is welcomed into the Unified Command structure during major events.

Laurence Madin, WHOI deputy director and vice president for research agreed. "Chris is a chemist for all seasons," he said. "He is a creative and prolific investigator whose work on oil spills, biofuels, microplastics and natural products among other topics have helped in the understanding, and sometimes mitigation, of the effects of natural and anthropogenic chemicals on the environment and society." 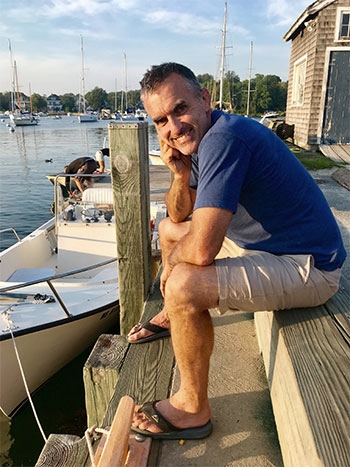 "I think I was well-prepared academically for the rigors of science," Reddy said. "I am a proud product of Rhode Island public schools from kindergarten to Ph.D., and I also have one of the best jobs in the world. When you have the tools and resources and inspiring peers to work with, it's exciting to come to work."

During his acceptance speech, Reddy expressed being both humbled and inspired. "I have been lucky to have had many mentors through my career and been afforded the luxuries of many life experiences that have contributed to my growth as a scientist and a person," he said.

Reddy's full acceptance speech can be found by clicking here.