The impact of the COVID-19 pandemic has given us a real opportunity to re-think nursing homes and to transform long-term care, says Catherine Taylor, executive director of Age-Friendly Rhode Island.

In Rhode Island, long-term care facilities account for 80 percent of all COVID-19 fatalities. That's the highest rate of all the 47 states and the District of Columbia that are publicly reporting these deaths.

Catherine Taylor, executive director of Age-Friendly Rhode Island at Rhode Island College, says that although preventing the spread of the virus was first hindered by a national shortage of testing supplies and personal protective equipment, the key vulnerability is staff.

"Staffing is one of the biggest problems with nursing homes worldwide," she says. "Essentially, direct-care staff aren't paid enough, so many of them have to work at more than one facility, carrying infections from one facility to the next." (The average salary of a CNA in Rhode Island is $14.88 an hour.) 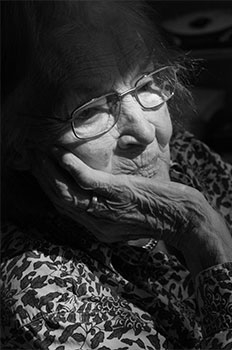 RIC Assistant Professor of Nursing Sharon Galloway is a nurse at a Coventry nursing home (the name of the facility has been withheld for privacy purposes) and concurs that they have both high burnout and high turnover rates.

"I work in a unit with 40 beds and three CNAs," she says. "We're severely understaffed."

Whereas, Galloway is responsible for the clinical needs of residents, the CNAs are responsible for the physical needs of residents, such as basic hygiene and grooming, feeding and mobility. Galloway also relies on them to be her eyes and to report anything they see that may be unusual, such as a lesion on a resident's back when they were bathing them. "But when you're overworked, some things can go unnoticed," she says.

There's also a serious lack of training in geriatrics among nursing staff, she says.

"Licensed practical nurses [LPNs], who provide basic nursing care under the supervision of a registered nurse [RN], predominantly run nursing home units," she says, "yet they are not formally trained in geriatrics nor in leadership, management and assessment. Moreover, only two percent of RNs are certified in geriatrics. That doesn't mean that a lot of nurses don't work in nursing homes. It just means that they don't have the necessary training. Thus, the quality of care can suffer."

This year, Galloway initiated a new clinical in geriatrics at RIC's School of Nursing to encourage future nurses to specialize in the field, while Taylor and Age-Friendly Rhode Island are re-thinking the physical structure of nursing homes.

Historically, nursing homes were built on the institutional model of a hospital, with residents living in double-occupancy rooms with a shared bathroom. However, Age-Friendly Rhode Island is promoting the GREEN HOUSE® model. The first GREEN HOUSE®in Rhode Island was built a few years ago at St. Elizabeth Home in East Greenwich.

From the outside, the building looks like a single-family home. Upon entering, you walk into a large living room with a fireplace. Situated along the periphery of the living room are 12 private bedrooms with private baths, offering not only infection control for the nursing home residents but preserving their privacy and their dignity.

"Nursing homes should emphasize 'home,'" says Taylor, who, along with the rest of the Age-Friendly Rhode Island coalition, is advocating for greater investment in livable nursing homes with optimum conditions for preventing the spread of disease.

With the second-highest population of nursing home residents per capita of any state in the country, upgrading nursing homes is critical in the State of Rhode Island.

"Ultimately, the pandemic's impact has given us a real opportunity to re-think nursing homes and to transform long-term care into the way we really want it to be," says Taylor.