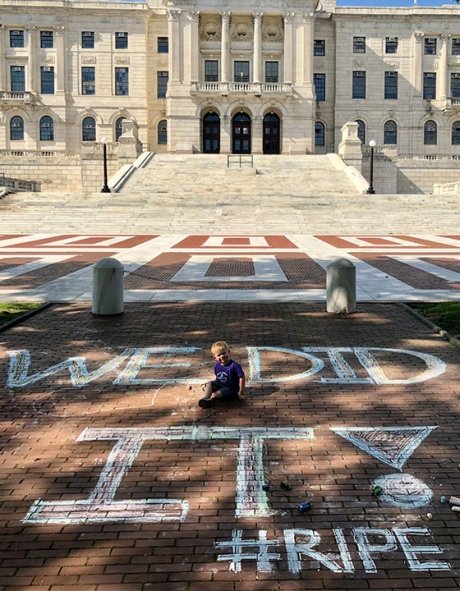 Through the advocacy of Associate Professor of Social Work Wendy Becker, R.I.'s new law recognizes the legal rights of ALL parents, regardless of their sexual orientation, marital status or gender.

Years of advocacy and community organizing by RIC Associate Professor of Social Work Wendy Becker has led to the signing into law of the Rhode Island Uniform Parentage Act (RIUPA) by Gov. Gina Raimondo on July 21. Now many Rhode Island parents will no longer be left in legal limbo about their right to parentage.

The new legislation repeals an outdated law regarding paternity and replaces it with a law that recognizes the diversity of today's families and gives children the security of a legal tie to their parents, regardless of the circumstances of their birth or the sexual orientation, marital status or gender of their parents.

Becker's involvement began with a phone call three years ago from a friend – UC-Davis Professor of Law Courtney Joslin, who wrote the Uniform Parentage Act as a national model for states to adopt. Joslin asked Becker if she would organize in Rhode Island, where the law hadn't been updated for more than 40 years.

Becker reached out to LGBTQ Action RI, a coalition she is a part of, and immediately gained their backing along with the support of a group of interested parents. Together, they formed the Rhode Islanders for Parentage Equality (RIPE) coalition.

Becker listened to countless pain-filled stories by parents whose children were born through insemination or surrogacy and who had met with numerous roadblocks in establishing a legal tie to their children.

"Essentially they were being asked to adopt their own children," Becker says. "They had to hire a lawyer and go through a very expensive and intrusive process to prove that they will be good parents in ways that heterosexual couples would never have to do. They had to undergo a home study, obtain references, talk about how they're going to parent and advertise for the sperm donor who had already signed away their rights. It's an extensive, expensive, humiliating process to essentially adopt your own children."

Among other important protections, the RIUPA now (a) provides clear standards for determining parentage for children born through assisted reproduction, surrogacy and to same-sex parents who aren't married; (b) ensures equality for LGBTQ parents to establish their parentage like other families; (c) provides a clear standard for courts to resolve competing claims of parentage; and (d) improves access, efficiency and consistency in Rhode Island family courts.

"It feels great to know that all families will be treated equally and will be protected moving forward," says Becker.