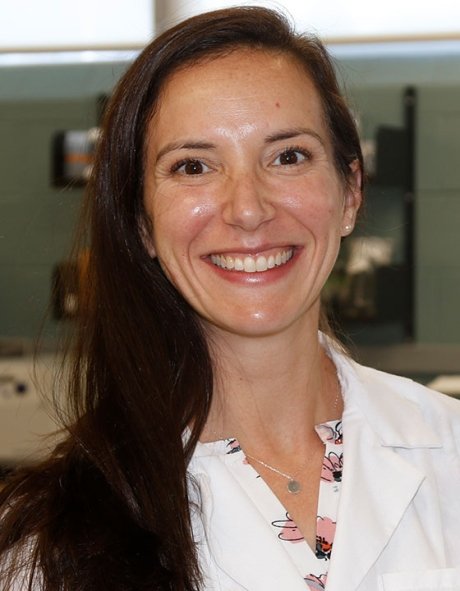 “RI-INBRE has been very good to me in supporting my research,” says Jamie Towle-Weicksel. “I am very thankful.” 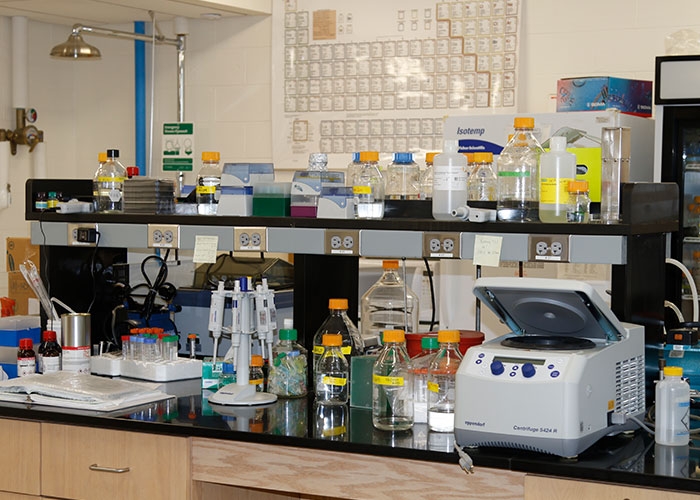 RIC Associate Professor of Chemistry Jamie Towle-Weicksel has been awarded an astounding six grants in six years for her biomedical research. Did we mention she’s only been at RIC for six years? Her latest grants are an Academic Research Enhancement Award (AREA R15) from the National Institute of Health (NIH) and an Institutional Development Award (IDeA) Networks of Biomedical Research Excellence Award (RI-INBRE/COBRE).

The RI-INBRE/COBRE award is a one-year grant for $100,000 to fund her collaboration with Dr. Eui Young So of Rhode Island Hospital on his research on rheumatoid arthritis.

The grant has two parts. The first part takes place at Rhode Island College, where Towle-Weicksel and her team, consisting of two students and one of her lab managers, Jorge Victorino, create nanoparticles – a vehicle in which you load a drug that targets a certain part of the body.

To use an analogy, “when you get the COVID shot, the drug itself is wrapped in these tiny little particles that we call nanoparticles,” Towle-Wiecksel explains. “In my lab, we are going to create nanoparticles – a vehicle to put the drug in – so that the drug can quickly enter the body and target the area that we want the drug to treat. In this case, we are targeting a specific protein we think may be responsible for rheumatoid arthritis.”

After creating the nanoparticle, loading it with the drug and testing it on cells in RIC’s lab, Towle-Weicksel will send the loaded nanoparticle to Dr. So, who will test it on his rheumatoid arthritis mouse model.

Not only are research students given the opportunity to work one-on-one with Towle-Weicksel, learning advanced techniques and using state-of-the-art technology, they have the opportunity to learn from researchers at Rhode Island Hospital in a clinical laboratory setting.

Moreover, her students are paid from the grant to do the research. For 10 weeks during the summer, they receive a Summer Undergraduate Research Fellowship (SURF). In the fall, they have the opportunity to continue their research as part of an independent study project.

“The RI-INBRE program has been very good to me in supporting my research,” she says. “I am very thankful. If it hadn’t been for their grants, I wouldn’t have been eligible for the NIH AREA R15 award.”

The AREA R15 award is a three-year $300,000 grant to help move forward Towle-Weicksel’s research in melanoma. Her investigations focus on a DNA repair enzyme, and her work has been peer reviewed favorably by experts in the field.

Like the RI-INBRE grant, the research team on the AREA R15 grant consists of two students and a lab manager, Corey Thomas.

Students are also provided SURF funding for 10 weeks during the summer.

“If I can train students over the summer and they really get to know what we’re doing and how to work in the lab and also how to work as a team, they will be able to take on this project as an independent study throughout the academic year. And that’s where students really flourish,” says Towle-Wiecksel.

One of the benefits of independent research is that students are given a part of the overall research project to focus on and it becomes their own.

Towle-Weicksel notes that “most of the classes taught in the Department of Physical Sciences have a laboratory component, but they also have clear learning objectives. With independent research, students are immersed in a world where no one knows the answer. Instead, they develop hypotheses. Sometimes they’re surprised when they ask me, ‘What’s going to happen?’ and I say, ‘I don’t know. Let’s try it and find out.’ The challenge and excitement of research is that nobody knows what the right answer is.”

Towle-Weicksel hopes to publish the findings from her research. Certainly she has gained the backing of the scientific community.

INBRE awards are made to independent biomedical research institutions within the IDeA network. Rhode Island is one of 23 states within that network. Awards target undergraduate institutions, community colleges and minority-serving institutions. Grants not only fund faculty, postdoctoral fellow and graduate student research, it funds research opportunities for students through SURF. INBRE’s ultimate goal is for institutions like RIC to serve as a “pipeline” for students to continue in health research careers and to strengthen the science and technology knowledge of the state’s workforce.