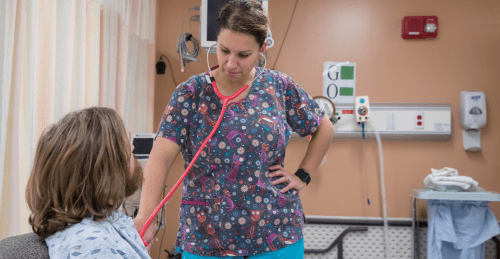 Supporting Our Students’ Health and Wellness

Health Services is committed to providing high quality, accessible and cost-effective services in a non-judgemental atmosphere that values diversity and respects individuality.

Free In-House Services and Support for ALL RIC students, Including Part-Time and Graduate Students.

You can now schedule an appointment with Health Services ONLINE from the Medicat Patient Portal accessed through your MyRIC account or you can call Health Services at 401-456-8055 to make an appointment with one of our nurses, nurse practitioners or physician. Same-day appointments and Tele-medicine appointments generally available. We provide primary care services to all students enrolled in Rhode Island College. We treat our students with a holistic approach – with an emphasis on prevention, risk reduction, and education to assist in making life-long health choices.

Students in distress can call 401-456-4673 (HOPE) to confidentially speak with licensed clinician. This service is available to students 24 hours a day/7 days a week.

Sick or Problem Visits with a Provider

On and Off Campus Resources (only if students sign written consent, may Health Services coordinate care with other professionals).

Health Services is part of the state-supplied vaccine program. Offers free vaccine to most students.

Current students registered for classes at Rhode Island College are eligible to utilize health services, whether you are full or part-time, residential or commuter, undergraduate or graduate.

For those that recently graduated, you can continue to use health services until January 15 for December graduates and August 15 for May graduates.

Additionally, those that are participating in an athletic program at Rhode Island College are eligible to complete the required medical clearance with Health Services.

Health Services is part of the state-supplied vaccine program. Offers free vaccines to most students.

Tuberculosis (TB) screenings are required for all full-time students.

Central Falls, Pawtucket, and East Providence released on May 26, 2021.

The Rhode Island Department of Health (RIDOH) is issuing a public health advisory due to increased drug overdose activity in Central Falls, Pawtucket, and East Providence.

Fentanyl may also be found in cocaine, heroin, methamphetamine, and other substances. Even a very small amount of fentanyl can result in an overdose.

Consistent with guidance from the Centers for Disease Control, state and local officials Rhode Island College has implemented a tool for faculty and staff to report students with a suspected or confirmed case of COVID-19.

All requests for medical records must be made in writing by completing an Authorization for Release of Medical Information form. Hard copies or faxed copies of this form can be accepted.

Medical records are considered strictly confidential under current state and federal laws with only rare exceptions. They are maintained separately from your academic records and are not released without your written consent.

Center for Health and Wellness

We are here to provide confidential and holistic primary health care and counseling to enhance the academic potential of our students. Telehealth Appointments Available.